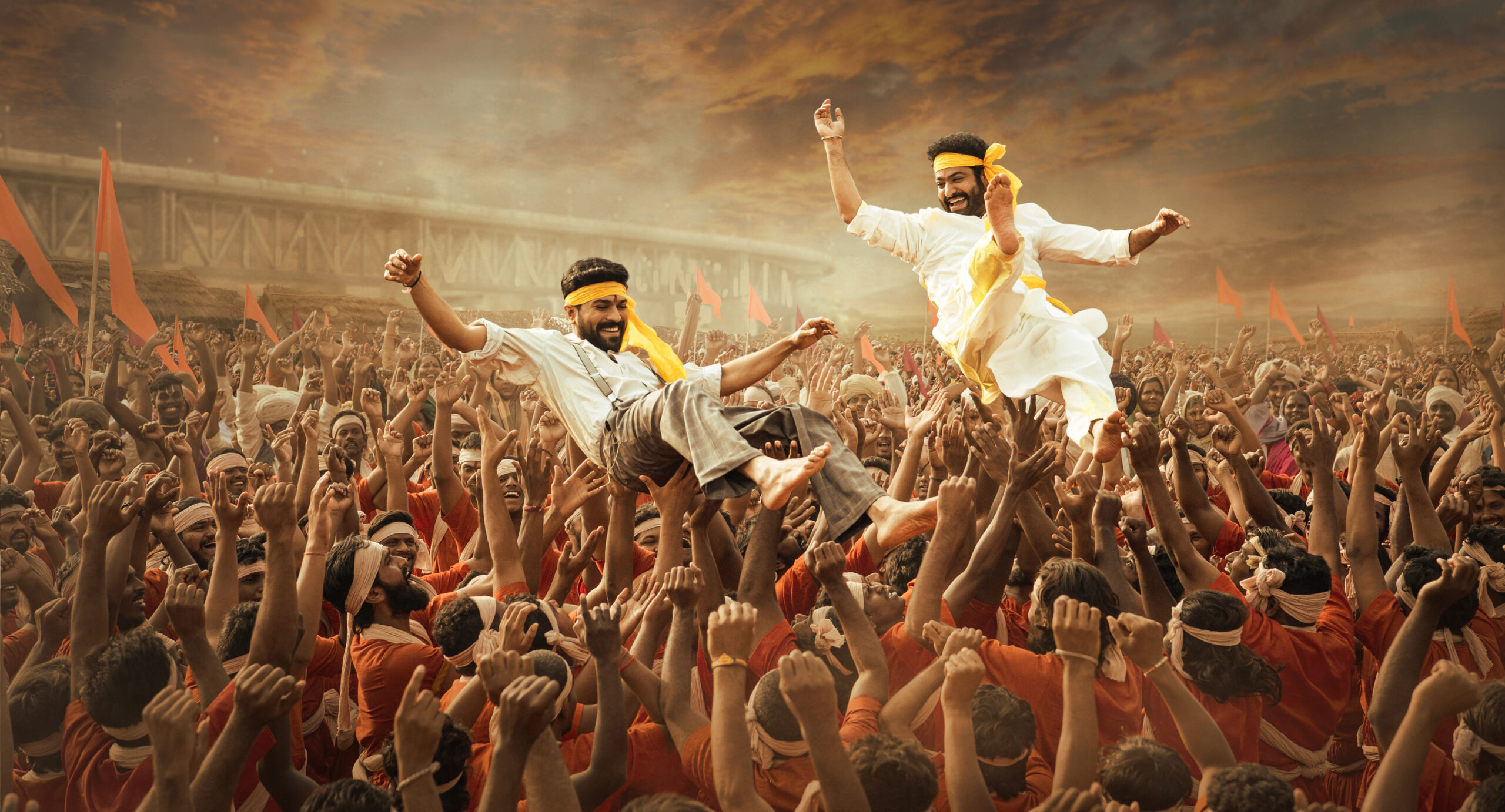 There are few blockbusters in recent memory that even compare to the luxurious over-the-top excess on display in S.S. Rajamouli’s Telugu-language epic, RRR (standing for “Rise, Roar, Revolt”). A blunt but melodic adventure that brings together two real-life revolutionaries, gives them both superhuman strength and abilities and then forges a relationship between the two as they find their alliance and their methods of taking down the British army frequently at odds with each other. Veering away from subtlety completely and leaning heavily into its bombastic nature, RRR is an infectious and endearing example of maximalist filmmaking that never misses a beat.

Set during the 1920s, RRR follows two anti-colonial revolutionaries who find themselves entangled in the same conflict but from different starting points. After the little girl of a village outside Delhi is taken by the British governor, Scott Buxton, and his wife, Catherine (both played devilishly by Ray Stevenson and Alison Doody, respectively), their village calls on the aid of Bheem (N.T. Rama Rao Jr.) to bring her back to her home.

Meanwhile, Ram (Ram Charan) has infiltrated the British army and will do whatever it takes to rise through the ranks in order to enact his own form of revolution – one that involves him going deep undercover to get access to weapons needed to truly challenge the Crown. Both characters are introduced in an over-the-top manner that represents their differing methods of dispatching justice: Bheem fights and sedates a giant tiger, while Ram follows orders with a ruthless, unflinching precision as he pummels and mercilessly beats protestors outside of a police station. One would avoid bloodshed if he can, the other sees the ends as justifying the means.

However, RRR isn’t just historical fiction, nor is it a purely action film. In fact, its crowning jewel is a dance sequence that sees its two lead characters out-stepping everyone in attendance at a lavish party where racist remarks and general discrimination bounces off its protagonists. A bromance of the highest caliber, RRR is at its best when Ram and Bheem find themselves working together, each one playing off the other’s strengths and weaknesses in perfect harmony. The dance itself strengthens bonds and is an overjoyous moment in a film that can play to both joy and sadness with equal amounts of gusto.

It helps that the chemistry between Charan and Rama Rao Jr. is off the charts. As evidenced by the dance sequence and cemented in the lengthy build-up to the film’s eventual intermission (or “InteRRRval” as it’s titled in the film) complete with montages of the two helping one another – RRR is nothing without its two magnetic leads and the way the two actors somehow consume every scene they’re in without one looking worse than the other. Even in action sequences, there’s rarely a visibly superior performer, both provided with set pieces and moments within them that demand applause.

Even though the bromance is clearly the heartbeat of Rajamouli’s epic, it’s all bolstered by those incredible setpieces and the masterful handling of tone. The film’s opening one-two punch of establishing the depravity of its villains to the brutality that Ram deploys upon protestors, RRR should not work as well as it does tonally. It establishes such a dark tone right from the beginning and then deftly moves towards a much lighter film, unbeknownst to the audience until they’re suddenly back into its heartache and evil.

There is levity within each set piece thanks to its heightened portrayal of even the act of reloading a bullet, but the impact of the scene itself is very pointed and precise. Perhaps it’s the benefit of the lengthy runtime (RRR clocks in at 187 minutes and it honestly flies by) that allows scenes to breathe and do so much without causing tonal whiplash. More importantly, RRR focuses on its characters more than it does its main plot; instead, Rajamouli wisely spends time on secondary plots to give the characters more heft and to further cement the bond between Ram and Bheem.

For many, RRR will be their first introduction to Tollywood and Telugu-language cinema. For myself, this was definitely the case, but what’s better is that it’s one of the best introductions one can have to a style of cinema. With its unyielding charm and steady aim, Rajamouli delivers a spectacle that is joyous while still packing many gut punches along the way. Its action is tremendous; energy is infectious; and at its core is a bromance that carries RRR all the way to its epic conclusion.