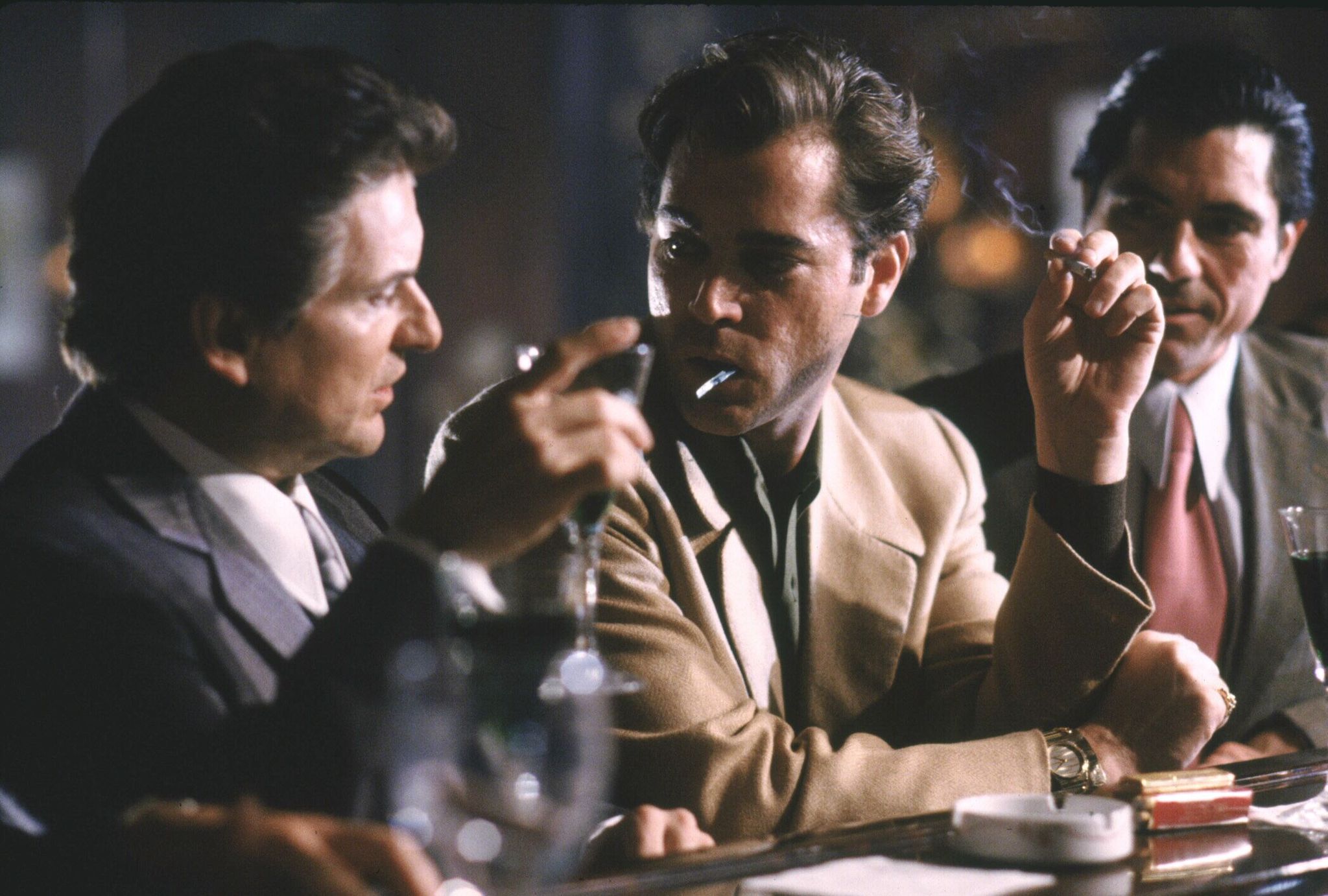 The Career of Ray Liotta

Ray Liotta’s death last week for some reason caused me to remember a documentary on the great acting teacher Sanford Meisner I’d seen quite a few years ago.  The understandable and inevitable question came up in that documentary as to why someone who could turn out so many fine talents under his tutelage (notable Meisner alumni include James Caan, Diane Keaton, Jeff Goldblum, Steve McQueen, Allison Janney, and a whole bunch more) didn’t have more of an acting career himself?

I’d seen Meisner in a couple of the few pieces he did appear in:  an episode of the classic TV drama series Naked City, as a vicious prosecutor in the meller The Story on Page One (1959).  It was abundantly clear the guy had the acting chops, no question.  But he had the liability of, well,  as someone in the doc said, “The camera didn’t love him.”

Stardom in moves and on TV is only loosely connected to talent.  There are some competent but limited actors who actually become humongous stars (John Wayne, say), and some brilliant actors who, well, get Sanford Meisnerized.

It wasn’t that the camera didn’t love Ray Liotta; it did.  And God knows, from his first appearances on screen he detonated a fully-matured, muscular talent.  But my point about Mr. Meisner is that movie careers are shaped by arbitrary and random factors:  good luck and bad, hot streaks and cold, favorable and unfavorable breaks.

Ray Liotta was not treated generously by the cosmos, but while he may not have been a star, his work was consistently stellar.

I always feel a pang when one of the home team passes.  Ray Liotta was born in Newark, New Jersey the year before I was born in the same city.  If you know anything about Newark, it explains something of Liotta’s performances:  a certain intensity, a certain energy.  I’m not saying Newark was some rough ’n’ tough place in those days, that Liotta’s story was one of those growin’-up-in-the-hood sagas, but it was a working-class place of stick ball on brick top streets, and moms yelling for their kids to come home from their apartment windows.  I guess the word I’m looking for is there was always an engaging, energetic earthiness to Liotta onscreen, and maybe that’s what made him —even while playing truly reprehensible characters – hard to (completely) hate.

I first noticed him in Jonathan Demme’s Something Wild (1986).  He’d done some TV before that, had a part in a forgettable (and please do!) Pia Zadora flick called Lonely Lady (1983), but his Ray Sinclair in Demme’s pic was a screen burning wake-up-and-notice-this-guy performance.

Ray Sinclair is the ex who hasn’t quite let go of Melanie Griffith’s Audrey who has seduced Jeff Daniels’ nerdish Charlie into pretending to be her beau at a high school reunion.  The first meeting between the three at the reunion is all tense subtext; Ray openly charming, friendly, yet giving off a sense that sets the audience’s spider sense tingling; he’s menacing without being menacing, and that was one of Liotta’s gifts; a radiant energy even when he was standing still.  The later scenes where Ray turns openly and violently villainish are appropriately disturbing, but it’s those opening notes, subtly played, barely perceptible which marked the 30-year-old Liotta, who was still in acting classes at the time, as a remarkable talent.  And then damned if he wasn’t able to turn that vibe 180 degrees the other way as Shoeless Joe Jackson in the sentimental Field of Dreams (1989).

But then comes the biggie in 1990:  Goodfellas.  The impressive thing about his Henry Hill isn’t just what a note-perfect performance Liotta turned in, but how he effortlessly held the screen against a heavyweight like Paul Sorvino, Joe Pesci’s much showier performance, and an at-his-peak Robert DiNiro.  There’s never any inequality on the screen when Liotta is sharing it; he doesn’t try to steal a scene, but he doesn’t give it up either.

And he does this other thing I alluded to earlier.  Henry Hill is a pretty distasteful guy.  He’s a horrible husband, doesn’t seem to be much of a dad, and even as a crook he’s something of a worm.  And yet…  We don’t like Liotta’s Henry, yet we don’t hate him, either, and maybe that’s how Liotta shows us the appeal of The Life; the addictive energy, the rush, the visceral glee of operating in an arena where the rules most of us live by don’t apply.  It’s more than just catharsis or vicarious thrills; it’s that Liotta vibe.  Maybe it’s as simple as this:  we liked watching him.

But maybe it was too terrific a performance.  Liotta took on some gigs so as not to get typed as the hyper-energized hood in movies like the M*A*S*H wannabe Article 99 (1992), or the gooey Corrina, Corrina (1994).

It’s not that he couldn’t pull off that kind of material.  Probably the best of that bunch, as cloying as it often was, was Dominick and Eugene (1998), with Liotta playing Eugene, trying to juggle the demands of med school with looking after his mentally challenged brother Dominick (Thomas Hulce).  Hulce has the showier role as the challenged brother, but Liotta’s character has more colors to play as Eugene tries to thread the needle of dealing with his emotionally fragile brother while trying to have a life of his own.

But his Henry Hill was so indelible, so much a part of a movie that itself became permanently burned into the popular culture, that it was easy, lazy casting to keep sending bad guy roles Liotta’s way.  And with his mako shark grin, sharply angled face, and blue eyes articles about him always referred to as “piercing,” he fit such parts too well for his own professional good in flicks like Unlawful Entry (1992) and Turbulence (1997).

“It would be nice,” he once told an interviewer, expressing his frustration, “to do a movie where I didn’t have to choke the girl to get her.”  With the material that was getting sent his way, he was in the unenviable position of “…just (having) to pick the best of the lot.”  And, in time, the lot wasn’t very good:  low budget schlock like Phoenix (1998) and Inferno (2000).

The shame was that even then, given the chance, Liotta could still show the cruelty of the business:  it wasn’t a lack of talent that relegated him to those ranks…just the breaks.

Take Cop Land (1997) for example.  Sylvester Stallone got most of the press attention for his playing against type as the thick-in-the-middle smalltown cop policing a suburb that’s a haven for a ring of corrupt NYPD officers, but, again, Liotta’s part had more colors to play.  Liotta is Figgis, fried, coked, looking for an insurance fraud scheme to pop him free for a restart somewhere else.  Liotta gets is all:  the cynicism, the moral collapse, the desperation…and finally (and, hey, my heart jumped when it happened) the redemption.

At a certain point as the century turned, Liotta grew so fed up with the way his career was going, that he made the bold move of dropping his agent and starting his own production company.  Narc (2002) was the result and if there was any justice to the movie business, it should’ve been a turnaround role.

Liotta packed on twenty pounds to play veteran detective Henry Oak, who becomes the desperate embodiment of the idea that the road to Hell is paved with good intentions.  Trying to do good by doing wrong, Oak is lost in a moral wasteland, and it may have been Liotta’s best performance since Goodfellas.

The critics were good to the movie, lauded Liotta’s performance, but what I remember most about its release was the industry buzz on it; how much people in the business were excited by a cop thriller that, in an era dominated by Lethal Weapons and Beverly Hills Cops, was a welcome throwback to the kind of  frighteningly life-sized gritty tales-from-the-streets cop stories like The French Connection (1971).

But good reviews and positive buzz are never enough.  Hollywood keeps score in a very basic, simple way:  box office.  Narc did $12.6 million on a $6.5 million budget:  just about breakeven, and on the Hollywood scoreboard, that didn’t represent a win.

Still, for the remainder of his career, given the chance, he could show he’d never lost his performing edge, that he could always bring his A-game.  Think of his brutally frank divorce attorney in Marriage Story (2019), or playing twins in David Chase’s return to The Sopranos turf with The Many Saints of Newark (2021).  Said Chase of Liotta’s performance:  “Ray seems to be a rather quiet man, but when the cameras roll, that electricity goes out and it’s just mind-blowing.”

My personal late-career favorite is his luckless Markie Trattman in Killing Them Softly (2012).  Based on a novel by the great crime writer George V. Higgins (of The Friends of Eddie Coyle fame), Killing… is, as Higgins stories usually are, a rogues’ gallery of low-level hoods spilling his street-talk-as-arias dialogue.  Trattman, who once engineered the robbery of his own poker game but never got caught by The Mob, is now damned by his history, getting blamed for a second robbery he had nothing to do with.  And if you know anything about George V. Higgins crime fiction, you should have a pretty good idea of how this works out for poor Markie.

If Hollywood is brutally capricious about who it graces with success – and who it doesn’t – there is one respect in which it is generous:  in time, the bad stuff falls away, and the good stuff – because it is good – resurfaces, again and again, to remind us of what we lost.

Knocked Up was Judd Apatow’s Controversial Statement on Family