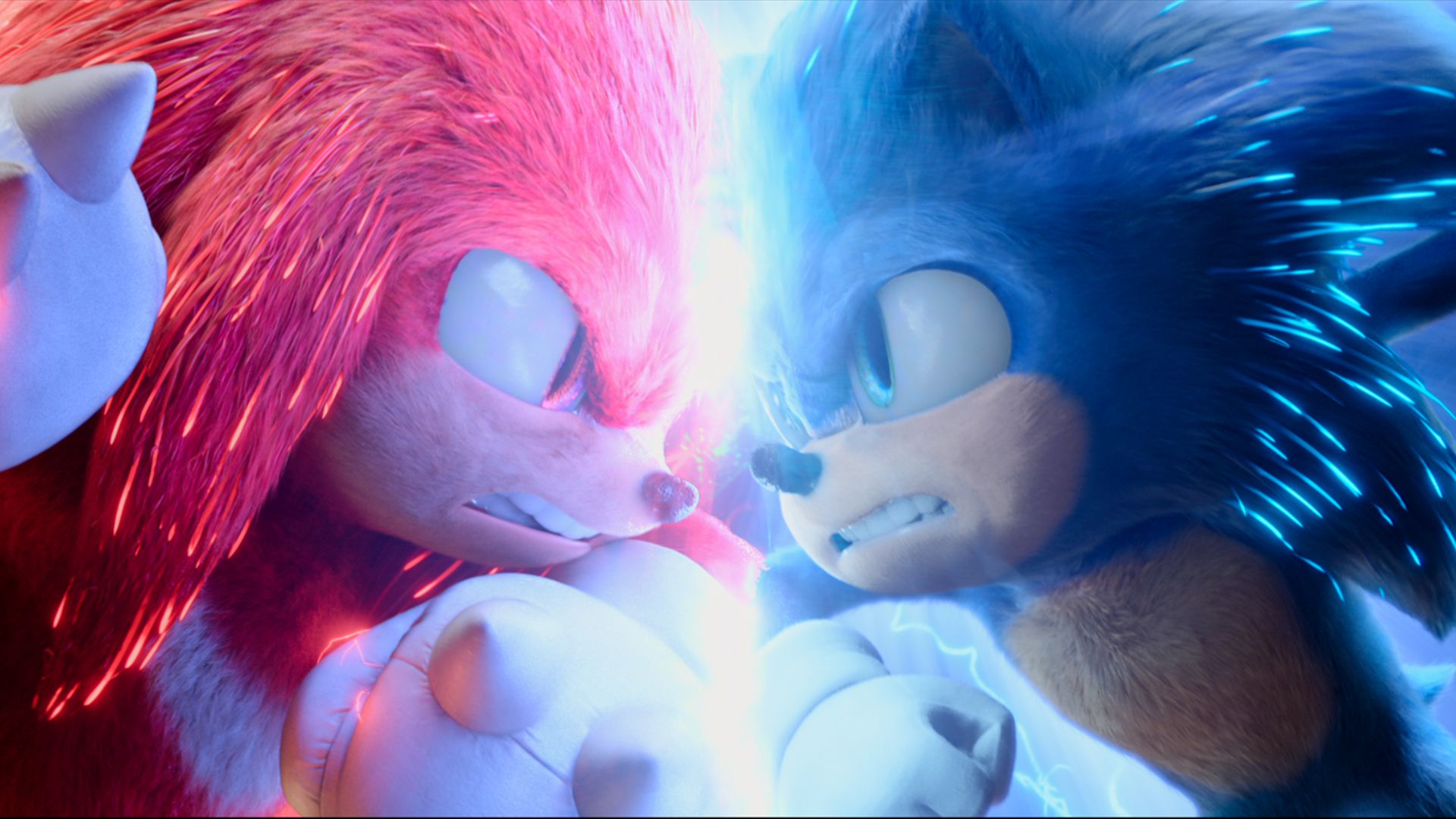 To call Sonic The Hedgehog 2’s script unfocused would be generous. The film changes genre, tone, and narrative focus more frequently than a TV being operated by a hyperactive kid in 1998 with 900 channels and a remote control. However, despite its total lack of structure, bizarre pacing, and often-flatlining humor, it is – like the first film in the series – aggressively hard to hate.

Sonic 2 sees the villain from the first movie, Dr. Robotnik (Jim Carrey) team up with the moody Knuckles (Idris Elba) to track down the legendary Master Emerald, a gem that gives its owner the power to “turn thoughts into reality.” Opposing him are Sonic the Hedgehog (Ben Schwartz) and his new friend Miles “Tails” Prower (Colleen O’Shaughnessey), who try to get to the emerald first so they can stop Robotnik from acquiring its power.

The hunt for the emerald is the main narrative thrust of Sonic 2, yet the film often seems to forget that this is the case. Much of the film also takes place in Hawaii where it follows a completely different narrative about Tom and Maddie Wachowski (James Marsden and Tika Sumpter) in a lighthearted wedding comedy reminiscent of Wedding Crashers or My Big Fat Greek Wedding. The film also dedicates way too much time to a side plot about an incompetent small-town cop (Adam Pally) trying to play sheriff for the day, dipping into Paul Blart territory. Even when the film does focus on Sonic and Tails, many of their adventures have nothing to do with their primary goal.

The result is a jumbled mess that feels like a different film every 10 minutes. Each of these narratives has its charming moments, of course, and the film often feels like a series of short trailers for a bunch of other fun movies. The wedding subplot in particular has a lot of potential, and it features Natasha Rothwell as bride-to-be Rachel in an extremely strong performance. However, its irrelevance to the rest of the story raises the question of why Rachel isn’t the lead character in her own (much better) film instead of a supporting character in this one. Multiple storylines are okay if a filmmaker can weave them together in some sort of thematic, tonal, or narrative way; however, there is no effort to make Sonic 2’s narratives converge effectively.

Adding to the lack of narrative structure is a series of baffling pacing choices. A movie based on a lightning-fast video game shouldn’t feel boring or sluggish, yet there are moments – particularly towards the end – where audience members will likely find themselves sneakily checking the time on their phones. With so many rapidly-switching plotlines, it seems strange that the film simultaneously manages to stretch out some moments until they become dull.

The humor ranges from delightful to flat, as the film balances tired clichés with some genuinely clever and fun quips. Any jokes about the first four letters of the phrase “shitake mushrooms” should have been outlawed after they peaked in Austin Powers in Goldmember back in 2002, yet this and many other overused jokes abound. However, for every clichéd non-joke that fails to inspire anything resembling laughter, there is a genuinely funny moment that will leave audiences cackling.

Nonetheless, for all of its flaws, it is hard to imagine an audience member who would walk out of Sonic 2 feeling anything but joyful. One can forgive the pacing, narrative structure, inconsistent tone, and unimpressive jokes because the film still manages to cobble together a fun – even if not always funny – time that is more than the sum of its parts.

A big part of this fun comes from the acting. While there are major issues with many parts of Sonic 2, there is not a single bad performance. Jim Carrey is perfectly in his element as Dr. Robotnik, and Idris Elba has fun as a stoic and serious Knuckles who comically contrasts the lighthearted zaniness of those around him. Schwartz is aggressively likeable as Sonic, and O’Shaughnessey proves why she has been the voice of choice for Miles for the past eight years. Marsden and Sumpter do a solid job despite being given less screen time than their skills warrant, and Rothwell absolutely dazzles. There is not a weak actor in the bunch, and watching a cast of stellar performers having fun is a joyous enough experience to leave anyone with a great feeling while leaving the theatre.

Fans of the first Sonic film may be disappointed that this one lacks its predecessor’s clearer narrative focus, stronger character development, and harder-hitting emotional moments. However, they are still likely to have fun hanging out with goofballs like Schwartz and Carrey for 2 hours while they watch a group of talented actors committing to the project and delivering a good time. And, at the end of the day, sometimes you need a film that just makes you happy.