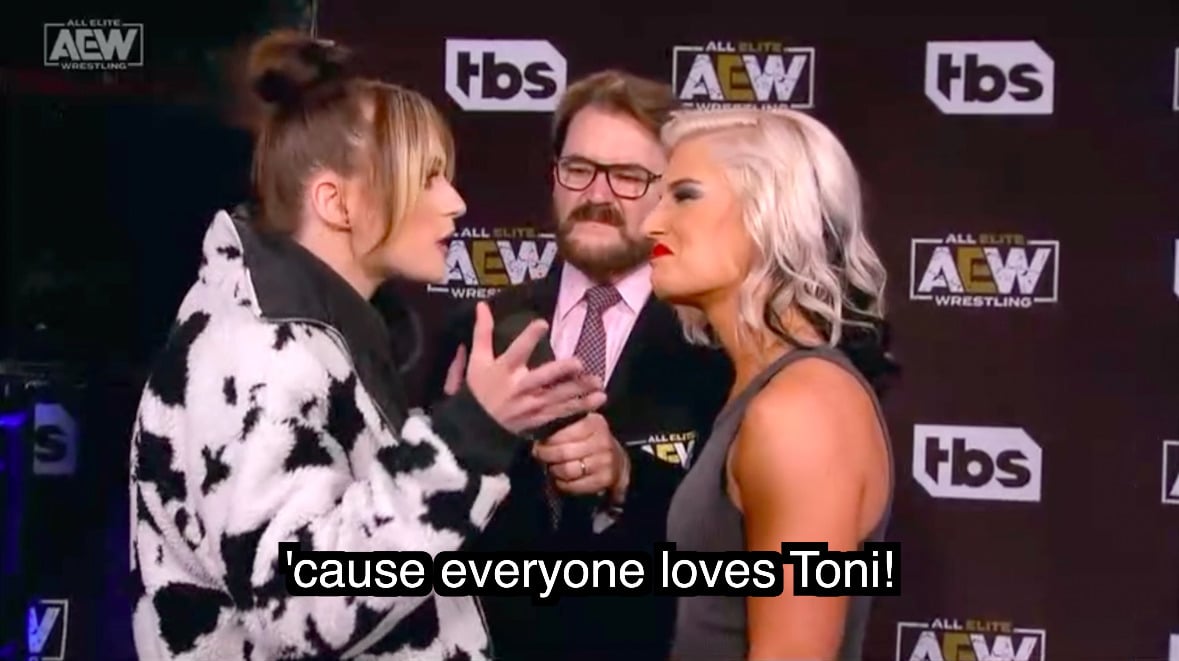 In the midst of the Owen Hart Foundation Tournament, two of the early qualifiers, Jamie Hayter and recent AEW signing Toni Storm, were scheduled for an interview on the April 6, 2022, episode of Dynamite to discuss the mere idea of the match that has since been confirmed for the first round, Hayter vs. Storm. Interviewer Tony Schiavone has promised, and thanked the two for agreeing to, “no physicality.”

Storm extends her hand as a gesture of sportsmanship, which Hayter promptly slaps away.

“I really hope we face each other in the tournament,” Hayter begins. Her voice is firm and low, and her open right hand is almost too close for Storm’s comfort.

But then she pulls back.

“I really do.” Her voice has gone up in register, almost supportive and lending assurance. Hayter’s hands have also moved away from Storm, now gesturing to herself.

“All that momentum,” she proceeds, “and star power you come in with ‘cause everyone loves Toni — that stops with me.” Storm busts out a smile, a smile she will not drop until the interview is over.

Hayter’s natural sarcasm does the heavy lifting to cast doubt on what is now apparent: Hayter means no hostility toward her presumptive rival. With her complimentary words, and her hands careful not to come too close to Storm again (even gesturing skyward at one point), Hayter’s disposition is nonaggressive, because although she is welcoming of a possible clash against Storm, she is focused on herself, on the prestige of winning the Owen.

“If anyone deserves to win this, it’s me.”

And that’s another thing—she welcomes it. Where her former-World-Champion associate, Britt Baker (who had been absent on TV since losing the title), would have no qualms discrediting and hiding from inevitable challengers, Hayter is simply unbothered by this challenge.

“Oh, sweetheart,” Storm responds, her face still glowing, “this has only just begun.”

If this story blossoms into an immediate forever-rivalry, it would be either woman’s first true rivalry in AEW; which, after seeing this dynamic between the two, feels just right. And if this leads to a bond that gets the two to team up and fight together—what with a returning Britt Baker being portrayed as a third wheel to the pair in the weeks that followed—we can’t say Hayter and Storm didn’t warn us, with a slap and a smile.

What’s Next for Scorpio Sky and Frankie Kazarian