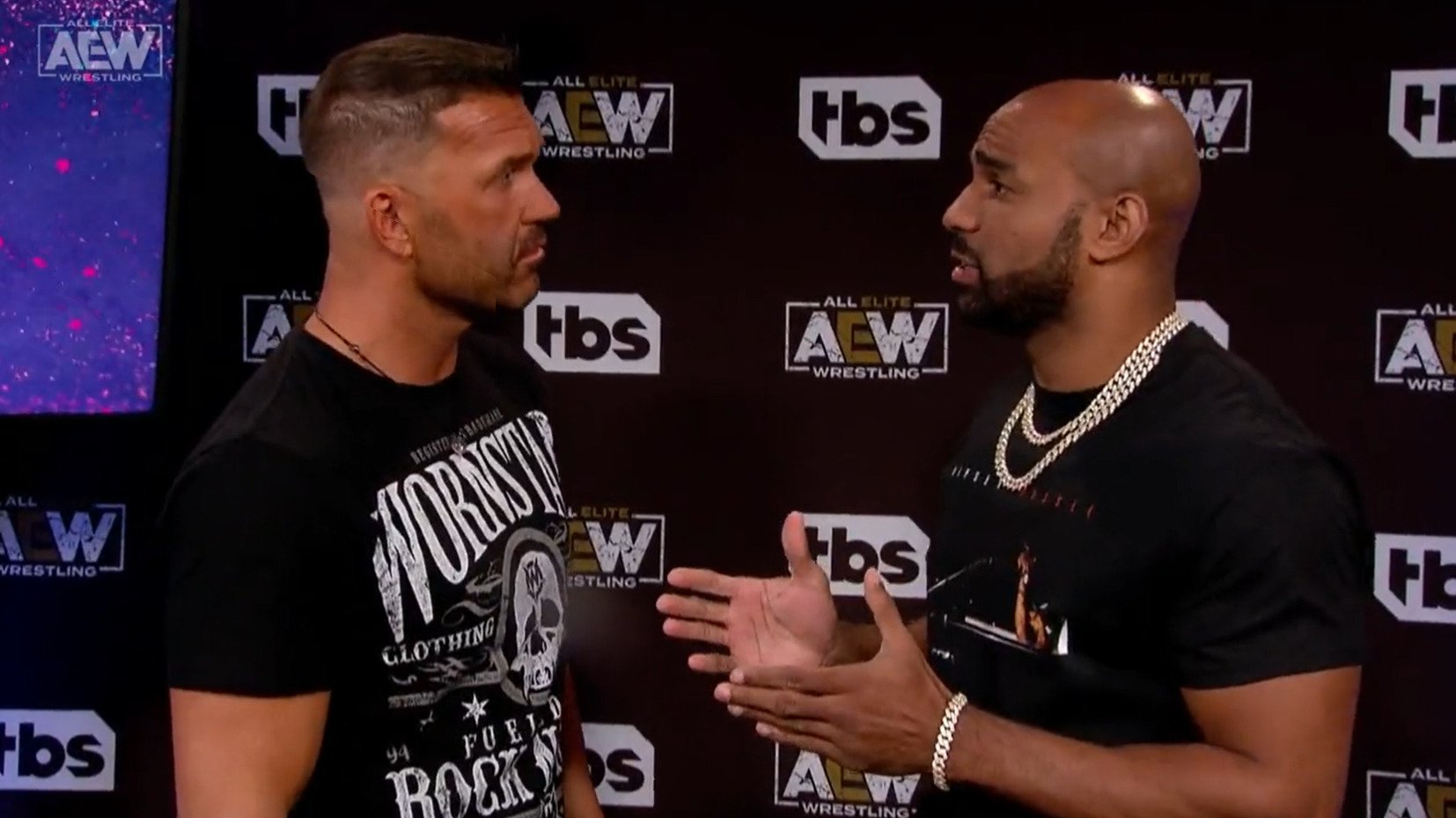 On a night when newly-minted, 3-time TNT Champion Sammy Guevara and Tay Conti are advertised for a promo segment on Dynamite, we hear  Excalibur lead us, viewers, into a backstage interview with Tony Schiavone,

Frankie Kazarian, and Scorpio Sky. This could register as a minor production hiccup, as the next thing we see is Schiavone introducing Kazarian, who has a  few words for the new TNT Champion. But Sky is nowhere to be found.

Kazarian barely gets into his challenge to the champion, when Sky appears to join the interview. He speaks directly to his former, regular tag partner; and is immediately apologetic.

“I apologize for interrupting, but this is important,” Sky begins. He talks candidly about the time he’s had to reflect on his achievements in AEW, the most recent of which was a TNT Championship run cut short by Guevara,  leaving Sky with one of the shortest reigns thus far at 38 days.

A passionate Sky maintains that none of it would be possible if it wasn’t for the man standing across from him, who acknowledges every point he’s made with quiet nods. Sky recalls struggling five years prior, and asking Kazarian for a favor, who came through for him. “Now, I need one more favor,” Sky  says:

“I know you wanna be TNT Champion, but I need you to wait just a little  bit longer.”

Kazarian can’t help but laugh at the absurdity, or perhaps the audacity, of the request. But Sky, aware of how it all sounds, makes it right with maybe,  maybe the only words that pay it back: “And I promise, you will get the first  shot.”

On the one hand, first impressions are sufficient: Scorpio Sky is bold enough to ask Frankie Kazarian, a man he is no longer tag partners with, for a favor,  after bringing up the fact that the last time Sky did ask for a favor, Kazarian obliged. Couple this with Sky’s decision to hang with what many still consider the wrong crowd in “All Ego” Ethan Page and American Top Team’s Dan Lambert, there has not been much goodwill built in the past year-and-a-half for fans to buy into Sky’s sincerity.

But on the other hand, Sky’s “exit” from SCU was always quiet, and since aligning with Page and Lambert, he has not had much onscreen interaction  (if at all) with either of his former stablemates Kazarian and Christopher  Daniels. He may very well still hold the same gratitude and loyalty for his OG  partners.

We go back to the scene of Excalibur leading into the interview with Schiavone, Kazarian, and an absent Sky. Perhaps, it was no slip-up; but,  rather, a simple indicator that Sky had given producers (and only producers)  prior notice that he was going to be there. There was, after all, no Page or  Lambert when he did the interview; he may have just made that call all on his own accord.

And with crowds somehow cheering for Sky, Page, and Lambert in their quest to knock the newly-minted obnoxious couple of AEW, Guevara and Conti, off their perch, our hold on Sky’s true intentions gets even muddier.  And we still have to ask, what do Ethan Page and Dan Lambert think about this development? How much can any of us trust Sky?

Kazarian answers quicker than most of us would:

“I’ve always had your back, and I always will.”