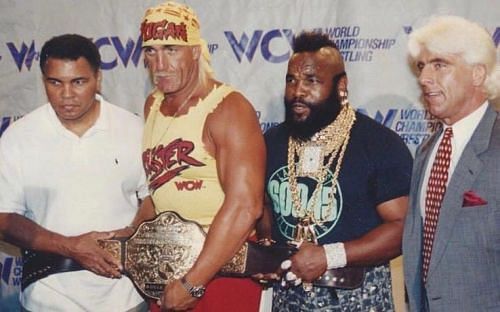 The Monday Night Wars, the battle between the-then WWF and WCW in which both promotions had weekly TV shows against each other on Monday nights, only lasted for about five and a half years, from the fall of 1995 to early 2001. But it was one of the most significant eras in the history of professional wrestling, as the two largest promotions at the time fought to the death, leading to Vince McMahon’s promotion prevailing and establishing a monopoly in the business.

WWF’s Monday Night RAW had been around since 1993, with its predecessor series, Prime Time Wrestling, dating back even further than that. But WCW, then owned by Turner Broadcasting, launched a competitor two years later, and WCW Monday Nitro debuted on TNT on September 4, 1995.

In 1995, WCW was in a period when many of its main stars were ex-WWF mainstays like Hulk Hogan and “Macho Man” Randy Savage, with some ancillary figures like Jimmy Hart, The Honky Tonk Man, and Hacksaw Jim Duggan also having made the jump. The roster also still included such WCW mainstays as Ric Flair and Sting. At the time of Nitro’s debut, the promotion still used the gimmick “WCW: Where the Big Boys Play.”

While most Nitro episodes would be broadcast from arenas over the course of its run, the debut originated from a mall. The Mall of America in Minnesota, in fact, which was the nation’s largest mall at the time. I was living in Minnesota at the time, as a high school senior, though I didn’t go.

The first voice you hear on the first episode of Nitro is that of Eric Bischoff, then an announcer for the company, who had previously worked for the AWA, also based in Minnesota. He announced along with legend Bobby “The Brain” Heenan and ex-Chicago Bear Steve “Mongo” McMichael, who was new to wrestling announcing and certainly sounded like he was (Mongo would later have a run as a wrestler.)

Bischoff was credited as the creator of Nitro, along with Ted Turner himself although, much like Vince McMahon in the WWF, it would be years before Bischoff’s behind-the-scenes role was acknowledged.

The first Nitro was just an hour, although it would later swell to two hours and eventually three. The episode started with a bang, with a high-flying match between Jushin “Thunder” Liger and “Flyin’ Brian Pillman.” Other big matches included one between Sting and Ric Flair- who would also wrestle on the final Nitro in 2001- and a main event between Hogan and “Big Bubba Rogers,” who was The Big Bossman in the WWF. After defeating Big Bubba, Hogan was confronted by the “Dungeon of Doom” heel stable, which included the recently deceased Kamala the Ugandan Giant.

The most memorable moment of the first Nitro, however, was the surprise appearance of Lex Luger, then a top wrestler, who had been in the WWF as recently as the week before. WCW successfully teased out whether Luger would be a heel or face, and whether he’d be allied with or opposed to the Hulkster.

The first Nitro was considerably more low-fi than wrestling is today. There were no sophisticated ring entrances or pyrotechnics, now much in the way of slick video montages. WCW was still not that far away from its Southern, “old school” heritage, which was long considered a contrast with the slicker programming offered by the WWF, even as the Turner-owned company began to import many of McMahon’s biggest stars from the decade prior.

WCW Monday Nitro, over the course of its existence, had many ups and downs. At its best, it offered such memorable moments as the debuts of Kevin Nash and Scott Hall, the historic nWo storyline, the rise of Goldberg, and the shocking “simulcast” with RAW on its final episode. At its worst came inexplicable booking decisions, lackluster matches, and weeks and weeks in a row of the nWo beating up different good guys in the ring.

But in its first episode, Nitro showed a hint of what was to come in one of wrestling’s most significant epochs.