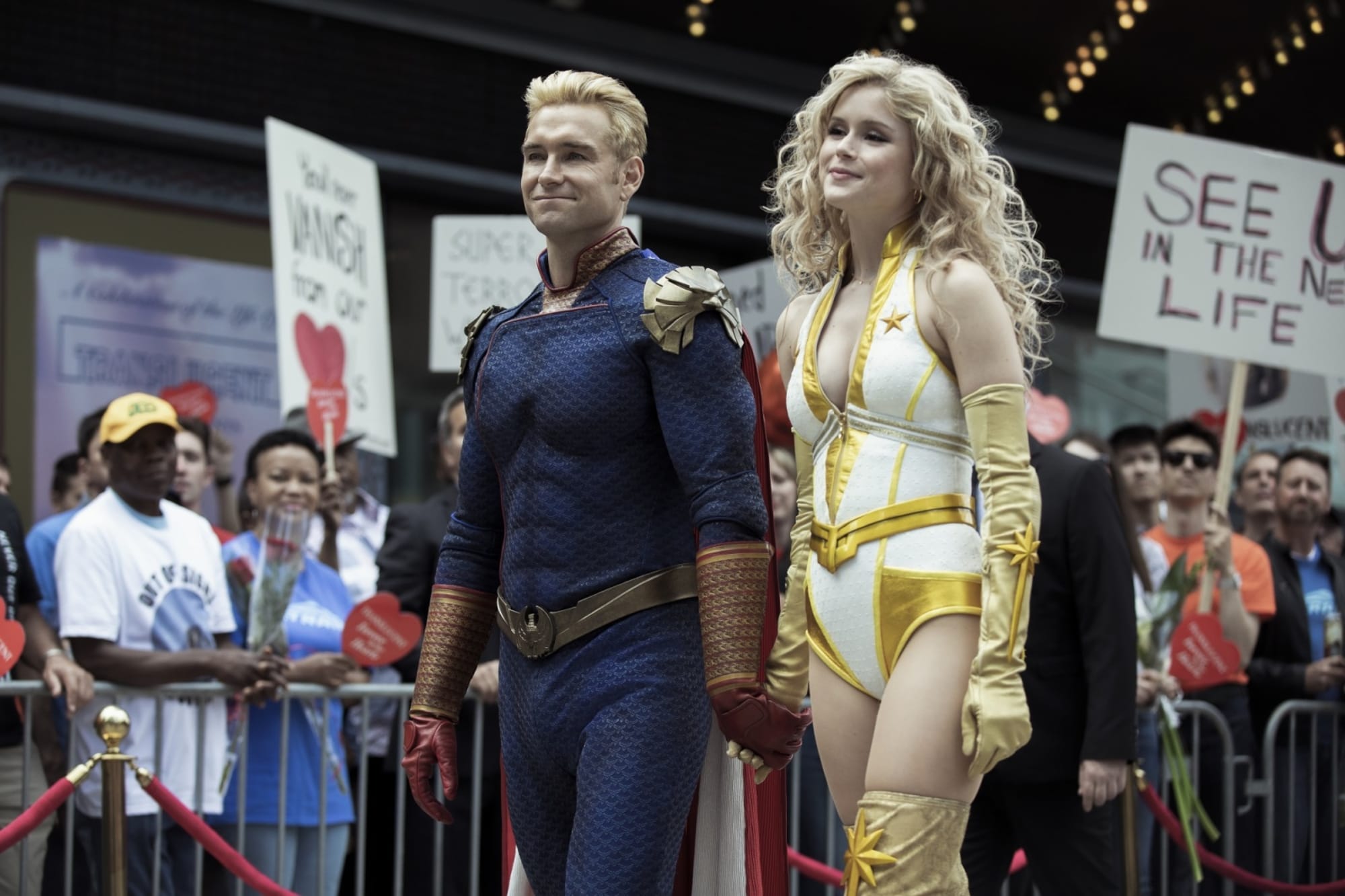 If there’s a common theme to the marketing of The Boys‘ second season, it’s the allure of more: even the episode description for “The Big Ride” promises more of what Amazon hypothetically thought made it a breakout hit in 2019: more explosions, more blood spurts, more tantalizing characters, more drama – a true consumerist’s dream of media, one might say. To its credit, “The Big Ride” delivers on most of those fronts: there’s certainly a lot of extravagant bloodshed, an abundance of new characters, and of course, more of Hughie’s self-righteous bullshit. In a lot of ways, “The Big Ride” is a satisfying return to the world of The Boys – that is, if the world The Boys established in season one was exactly what you wanted from the series.

“The Big Ride” looks, feels, and smells like season one, in ways that are both understandable, but disappointing for anyone hoping to see The Boys refine its core ideas.

Beginning with a quick succession of “where are they now” scenes, The Boys inelegantly reintroduces audiences to the aftermath of “You Found Me,” picking up but a few weeks later, offering the kind of minor changes to the status quo you’d expect in a season premiere. Starlight is still living the two-faced identity of superhero and woman who hates being a superhero, Homelander is trying to reposition himself in the Vought power structure, and everyone is talking about “super terrorists” running around the world, a byproduct of Homelander’s gamble in season one (and an easy avenue for some casual racism, in the form of a “super-terrorist” who’s power, is he is a bomb because that’s the most inventive thing that could be thought of).

Things haven’t changed much, except Hughie’s living in the closet of a gang headquarters, and Mother’s Milk is spending his free time building a dollhouse for his daughter – oh yeah, and Billy the Butcher is completely absent from the picture, leaving an enormous hole of personality in the titular group of characters at the center of the cast. Perhaps the most troubling thing about “The Big Ride” is not how sprawling and big it all feels, but how much of a vacuum is left at the center of its human stories without Billy. Even though he’s nowhere near my favorite character, it’s worth noting just how little dramatic traction can be gained out of Hughie, Mother’s Milk, Frenchie, and Kimiko trying to figure out their next move; in fact, without the Deputy Director’s head exploding in front of them, they really don’t do anything at all, skewering interest towards the super-powered dramatics happening in the rest of the world.

(does anyone think its strange how little anyone at Vought is looking for Butcher or his crew? There’s the brief news segment, but nobody at Vought seems to give a shit about it, which seems… a bit strange?)

Thankfully, The Seven’s side of things is generally more interesting – even for The Deep, whose season one journey was easily the weakest element of the series. Season one touched on religion with Stargirl’s past and Ezekiel (in “Good for the Soul’), but as much of The Boys‘ satirical touches in its freshman offering, there wasn’t a whole lot done with the concept.

Season two is upping the ante on both fronts, by re-introducing the Church of the Collective – and more importantly, catalyzing some moments of an actual challenge for Homelander. Our titty-sucking Superman stand-in’s been drunk on power from the get-go, and season two is throwing some wrenches in the works, offering ample opportunity to watch someone who considers himself god-like, begin to wrangle with the ultimate limits of his power (and with no more of Mommy’s milk around, he is going to be very cranky during all of this). It’s not exactly introducing more nuance to the Homelander character, but the presence of more prescient dramatics, those which challenge his self-conception, is a potent fuel for The Boys‘ to begin delivering on its promise of being a truly twisted inversion of superhero tropes.

The rest of The Seven’s stories are a mixed bag; Starlight playing both sides of the fence, while catering to the whimpering wheezes of Hughie’s bullshit, is not exactly an endearing reminder of their season one “romance”. The less she’s in his orbit, the more interesting a character she is – given that, it’s no surprise their subway scene released the most groans from this meticulous observer.

But the rest of The Seven feel equally shake: with A-Train in the world’s most convenient coma, Black Noir being a random plot device in the Middle East, and Queen Maeve basically missing from action, “The Big Ride” spends a lot more time revisiting the status quo of Vought-powered superhero life than it does pushing these characters forward – except for Homelander, reeling from the triad of Vought’s CEO, the arrival of Stormfront (hey, it’s Aya Cash!), and the absence of Elisabeth Shue’s dominating screen presence. Antony Starr can carry an episode on performance alone, but if it’s just Homelander growling and hamming it up all season while the other characters jump around in the background, The Boys‘ sophomore effort is going to fall flat on its face (or in the case of the debate around the word “super terrorist” in this episode, just feel embarrassingly empty).

That’s a lot of words to say “The Big Ride” is a mediocre, if mildly intriguing, table-setting premiere, taking a paint-by-numbers approach to storytelling that betrays its self-identified rebel identity; though The Boys certainly can impress with a shocking moment of violence or an abrasive punchline, there’s still a noticeable lack of depth and development of the core elements of the series – in fact, the most developed story at this point is the lineage of Compound V and Frederick Vought, two things that in the large scheme, mean fuck all to the identity of this series (they’re also the most boring, uninteresting parts of the series if we’re being honest).

“The Big Ride” isn’t an abject failure, by any means; it definitely delivers on its promise of being “more” of The Boys, offering a heightened sense of everything. That works, but only to a degree: when the blood spurts dry up and every speck of brain is out of the field of vision, “The Big Ride” looks, feels, and smells like season one, in ways that are both understandable, but disappointing for anyone hoping to see The Boys refine its core ideas.