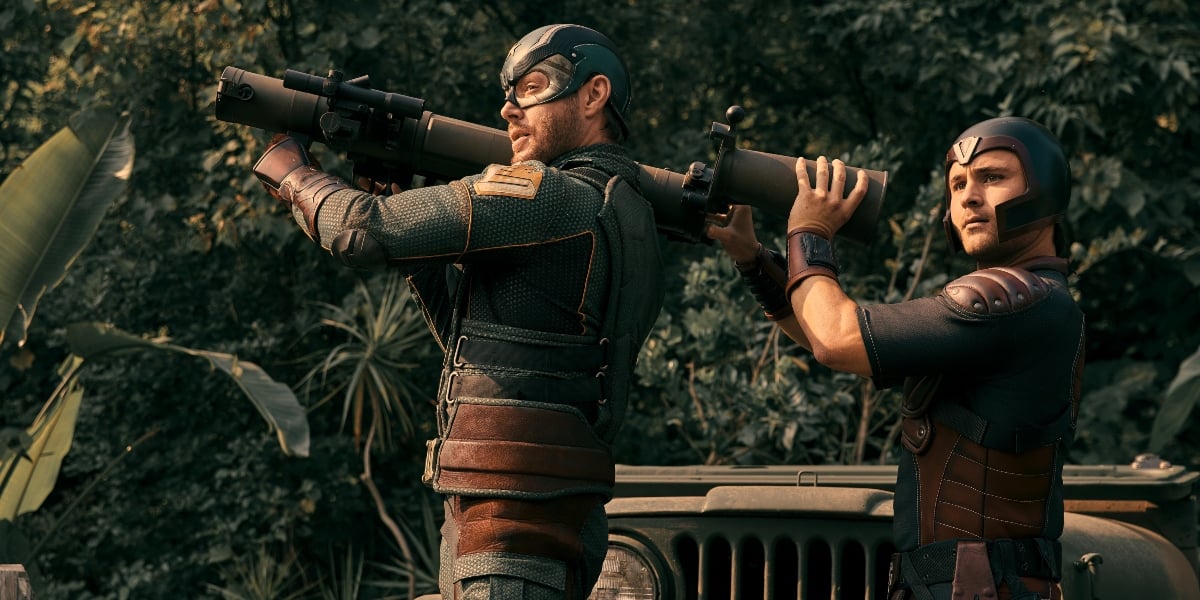 Though Hughie’s never been the ‘true’ protagonist of The Boys, his plight has always provided a foundation for the show’s small (but occasionally impactful) heart. Though most assuredly a normcore chode (remember the Billy Joel shit in season one?), Hughie’s maturation through the first two-plus seasons of The Boys has provided a baseline for its other characters to follow – which, as season three began, was trying desperate to live a normal life and pretend things were okay… that is, until Gloria quite literally blew that idea up in front of his face.

That frustrating, enraging sense of failure led to quite a dour tone in “The Only Man in the Sky”, one that swallowed the episode’s attempts at humor and felt cynical in a way that was more gloating and counterproductive, than interesting (or even useful). “Barbary Coast”, however, remembers that The Boys formula works better with a lighthearted touch – and though that probably makes it feel more like Family Guy than the Justice League satire it’s trying to be, this episode is a prime example of that formula working to perfection, an hour that twists the knife deservedly into the gut of every single main character, an hour-long lesson in the fucked up places desperation (and a touch of moral complacency) will send anyone.

The most potent of these, of course, are the characters who twist that knife into themselves willingly; the most obvious examples being, of course, Starlight and The Deep, two people still dealing with the fallout of The Deep’s sexual assault on Starlight way back in the pilot. The Deep’s grovelings to return to the Seven are finally complete in “Barbary Coast”, as he’s welcomed back into the group as part of a reality show plot twist (engineered by Homelander, partly because he won’t entertain the possibility of a Muslim woman joining the team).

These two characters’ stories diverge in very different ways throughout the episode, but the thematic foundation of both are the same, and are working towards something a little more potent than the usual collection of blood splatter and thin societal reflection. It perhaps manifests in a more visceral way with The Deep (exploding octopus heads > clenched fists behind back), but they’re exploring two ends of the same spectrum: how far are Starlight and The Deep willing to go for what they want, for what the people they love are expecting (or in The Deep’s case, demanding) they do for them? The Deep, in all his moral emptiness, is literally willing to do anything, even eat his own friend graphically – which is exactly the treatment he deserves, even if it’s happening simply to serve Homelander’s maniacal hedonism.

Starlight is also willing to do more than she’s comfortable with, but it’s in pursuit of something she believes to be more honest; however, the fact it is manifesting with a series of lies and weak threats to Homelander (which he rightfully laughs off: at this point, who gives a shit if he killed a plane full of people when he can effectively end the human race?), is probably a telling sign that approach at honesty is coming from a false place. But can you blame her? The only times she is honest with the men in her life, she’s met with disregard for her safety (Hughie), ignorance to her warnings (Supersonic, who is really just begging to be killed in an awful way this season), or of course, realization of the thin grip on “power” she’s been given by Homelander, who undercuts her position in the Seven by reminding her that her ‘final say’ doesn’t really mean shit when Homelander’s Q rating is through the roof.

The more devastating image, of course, is The Deep chewing on his octo-legged voyeur friend; it is a scene that is designed to shock and unsettle, of course – but considered as a metaphor for The Deep allowing himself to be wholly consumed in pursuit of something dangerously hollow and superficial, the image is rather fitting, no? The Deep’s degradation is only complete on a show like The Boys by killing everything he loves first; given that this is The Boys, forcing him to eat it is makes a just dessert even more appropriate, even if I personally don’t need to watch him struggle to chew the writhing, bleeding and slightly anime-eyed sea creature buddy.

(While we’re on the topic, I really did not need to see Kimiko break Hughie’s arm, a plot beat that is treated a lot more casually than I expected).

That image of Timothy’s last couple legs poking out of The Deep’s mouth is about as fitting an image for every character on The Boys during “Barbary Coast”. Though the Grace-centric flashback, we learn how Payback and Soldier Boy were Grace’s mouth octopus; for others like Mother’s Milk and Frenchie, it’s letting their former identities creep back into their lives to redefine them yet again. For the things they love, these characters are willing to swallow the most insane, toxic shit in the name of an abstract goal – one that, for characters like Starlight and The Deep, are nothing but goal posts constantly being moved by the people around them.

This even applies to the characters on the fringes of the episode; both A-Train and Black Noir, perhaps the most narratively isolated characters on The Boys right now, find themselves in different crises of identity as black superheroes, both with equally depressing results at rebranding. Black Noir’s is obviously the more painful of the two (remember when A-Train was forcing people to overdose on heroin? Yeah, fuck that dude), as he was merely trying to have some sense of public identity in defiance of a young Stan Edgar (working for the then-named Vought-American), but both of them provide the metaphorical rails for the rest of the episode to coast on – which it certainly does, to blood-squirting (and uncomfortably bone-crunching) glory.

Though there’s still stories in The Boys that feel awkwardly inserted in between these other, more interesting developments – this episode barely registers that Butcher is really not doing well from taking the temporary Compound V, and there’s about 200% too much Sad Ryan – “Barbary Coast”, and its awesome reveal of Payback’s Nicaraguan origins (TL;DR: Soldier Boy got kidnapped by Russians after Payback fucked around and killed a lot of people)makes for a well-executed ‘momentum gathering’ episode, cleaning up the mess of the previous hour and aligning itself properly for the rest of the season to come.