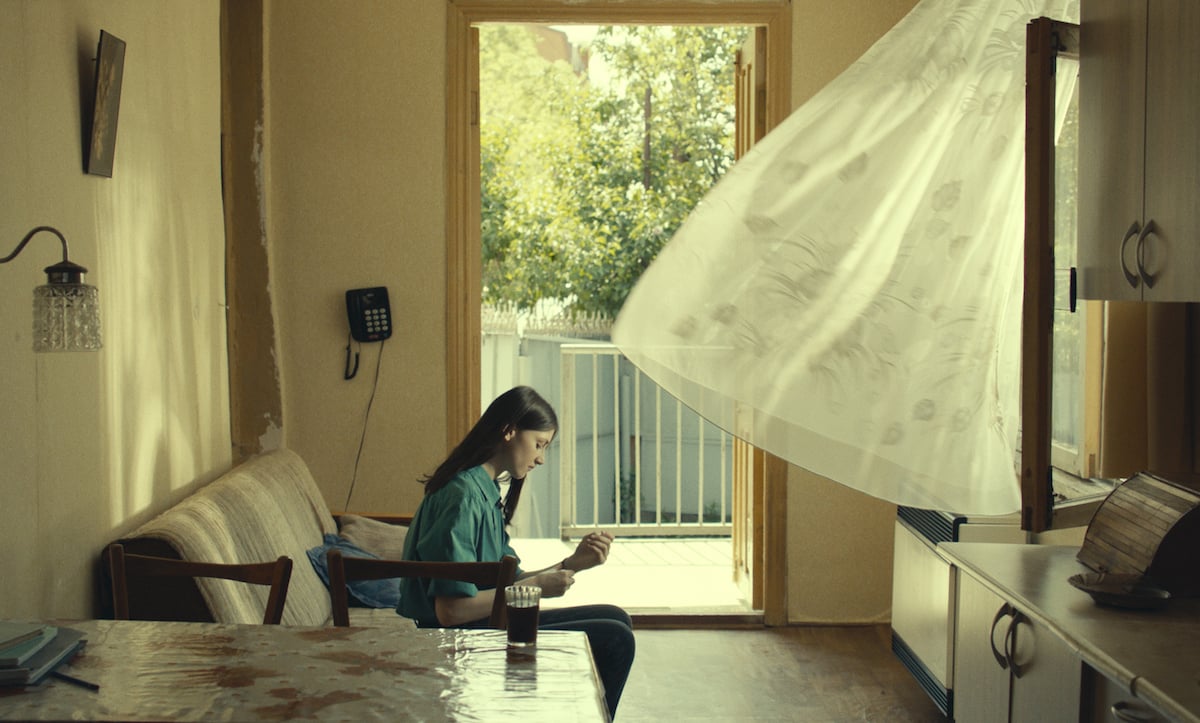 Forget Paris, Venice or New York, Kutaisi in Georgia appears to be the real city of love. This is where two lovers Giorgi (Giorgi Bochorishvili) and Lisa (Ani Karseladze) meet outside of a school, then again at a crosswalk, agreeing to go on a date at an open air beer and ice cream cafe that sits alongside the river Rioni. The city, deep within the mountains, with rustic buildings and old-world charm, including a gondola perennially scaling up and down in the background, is its own character in this film, lovingly photographed in endless zooms, pans and whips that show off the majesty of Georgian architecture, undimmed by decades of Soviet occupation. Its presence cannot be extricated from the lovingly made fable What Do We See When We Look at the Sky? — especially when a strange “evil eye” mysteriously changes the appearance of both these lovers.

This bar by the white bridge thus becomes the site of a missed opportunity as both lovers cannot recognize the other. They have also lost their respective skills; Lisa’s studies of medicine and Giorgi’s footballing ability. While in a traditional film they may mope and curse their lot in life, this movie holds them at a remove, often drowning out the noise of their meetings and conversations with whimsical, wistful music that alienates us from the reality.

Complicating matters is the playful narration by the director himself, who uses his deadpan chops to lend a sense of inevitability to his tale. At times questioning the use of stories themselves, he constantly contradicts himself to middle the waters further. So far so whimsical, but then this predictable fable-like love story is combined with something rather different: a gorgeous love letter to the beauty of watching and playing football.

This may be the corona lockdown talking but this might be one of the best films about the joys of watching football ever made, joyfully set during an alternative World Cup where Messi finally dominates on the world stage. With projectors and TV screens popping up in every beer bar, cafe and kebab shop in town, we are treated to endless montages of plastic chairs, crossed legs and incredible emotion, made all the more potent considering Georgia’s own woeful World Cup record. (It also brought back wonderful memories of watching the Euros in the piazzas of Napoli and the beer tents of Karlovy Vary, memories far more cherished than any of the standard tourist sites.) In a wonderful stroke of magic realism, we learn that the stray dogs themselves, one of them lovingly named Vardy, also like to attend and watch the games. To further hammer in this point, director Alexandre Koberidze creates a glorious montage of kids playing in a concrete box to cheesy Italian music, reaching a fever pitch that shows off the wondrous glories of the beautiful game.

This montage works. It really works. But there are others. Many many others. Stretching from different food arrangements to the back of women’s necks. Lingering shots on trees, sidewalks and streets. Taking us again and again to the fast flowing river. Once the indulgent montages reach into the double (possibly triple) figures, the film abuses the enormous good will it had earned up till then. It’s a bit like the slices of nearly eaten khachupuri — a bread-based delicacy seen as an intangible part of the country’s culture — we see in the middle of the film, lovely to look at from the outside but ultimately missing the wholesome filling in the middle. Running at 150 minutes, What Do We See When We Look at the Sky? is really half the length it needs to be. The runtime of a football match should’ve given Koberidze a clue.

What Do We See When We Look at the Sky? plays in Competition at the digital Berlin Film Festival, running from 1st to 5th March.

The Original Coming to America was the Movies’ Funniest Immigrant Story

Berlinale 2021: Cop Drama Drift Away is a Mostly-Assured Mix of Poetry and Realism