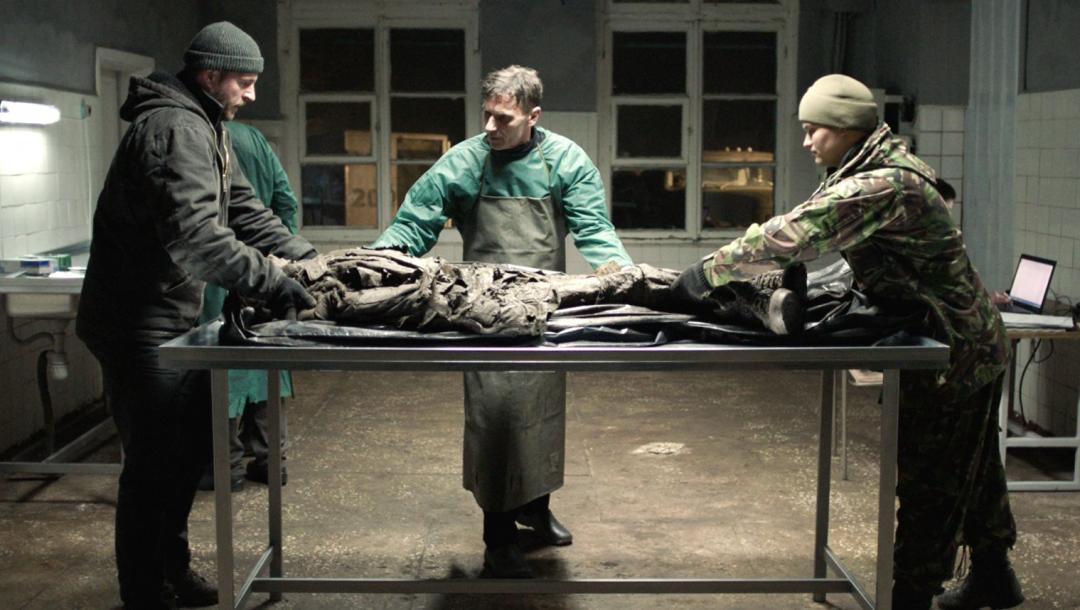 Valentyn Vasyanovych’s Atlantis is a film composed almost entirely of static long shots, filmed from as straightforward an angle as possible. It’s the kind of impassive, super-objective style that recalls Jeanne Dielman, with a slow pace to match. But like Ackerman’s film, the monotony and the sense of quiet torment and isolation felt by the protagonist makes the film’s long tableaus entrancing, sucking the viewer in to a life of solitude and inexpressible pain. Rather than the single mother of Dielman, Atlantis follows Sergiy, a soldier suffering from PTSD in the wake of a devastating war. Increasingly isolated after his friend commits suicide and his work shuts down, Sergiy seems to be standing on a precipice when he finds purpose and love and an unlikely source: a volunteer group that finds identifies and buries the long-forgotten corpses of the war dead.

As already mentioned, the formal style of Atlantis is one of detached impassivity. With no score, minimal editing, and an inexpressive camera, the film uses performance and backdrop as its primary means of expression. The backdrops, to get a bit Herzogian, are a lesson in magnificent desolation, the blasted landscapes of postwar Ukraine serving as a reflection of Sergiy’s similarly shell shocked psyche. But still, for all the desolate beauty the film has to offer, it’s very careful not to romanticize or dramatize either the world or its inhabitants. Again, the clinical presentation is the MO here. In one telling scene, Sergiy and his love interest Katya bring a freshly discovered corpse to be assessed by a coroner. What follows is a long, drawn-out sequence of the corpse being undressed and documented in precise but impersonal detail. There’s no sentiment here, just the arduous job of picking up the pieces.

This may make it sound like the film is devoid of warmth or affection, but that isn’t the case. It’s just that Atlantis positions these moments as small, fleeting oases in the wasteland it presents. Which for the most part makes them all the more impactful. For all their clinical presentation, these small moments of humanity shine through. This makes Atlantis a film of contrasts, in which love is found at times quite literally amongst the corpses of past battles and the dull monotony of existence in this shattered world is only occasionally broken by sudden bursts of humanity.

Lingering Fails to Linger Long in the Memory