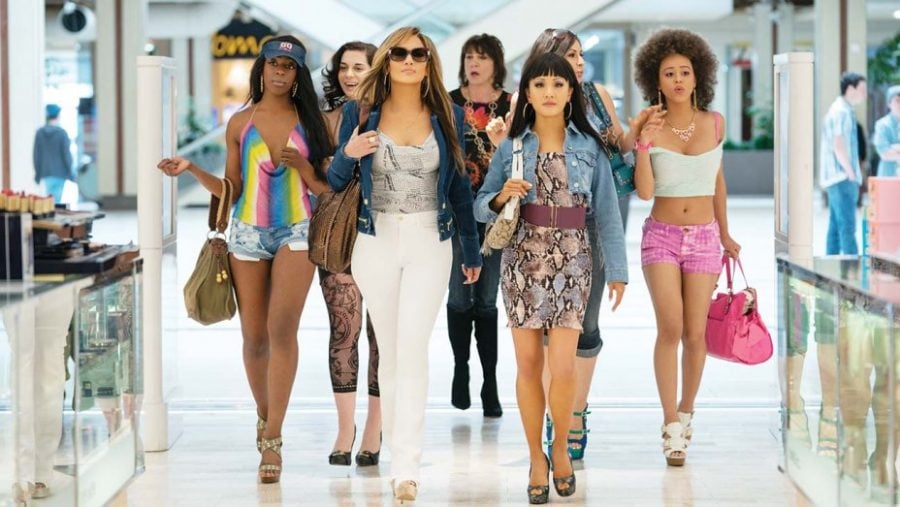 There are few kinds of movies as satisfying as well-executed heist films in which the thieves in question rob from someone totally deserving of it. We get to combine the thrills of the high-stakes theft with the moral pleasure of seeing someone who deserves nothing lose everything. Hustlers, written and directed by Lorene Scafaria, initially sees itself as one of these righteous heist movies, before unconvincingly attempting to become something more interesting and complex toward the end. Instead, it winds up just a shallow collection of slow-motion shots of beautiful women walking toward the camera.

Hustlers begins around 2007 when Wall Street is riding high ahead of the impending collapse of the global financial markets. Constance Wu plays Dorothy, an exotic dancer who has just started at an upscale strip club in New York City, where she’s looking to up what she’d been earning at smaller clubs. But Dorothy doesn’t have the experience to put on the kind of dances that earn the most tips, and she’s timid and uncomfortable with her customers in the private rooms.

Ramona (Jennifer Lopez), one of the more experienced dancers and a high earner, takes Dorothy under her wing and helps perfect her technique. But the increased cash doesn’t do anything to help her deal with the swarms of misogynistic customers and harassers who torment her at work, nor the men behind the scenes who demand a cut of her pay at every step. Once the markets crash, Dorothy’s wealthy clients drop out, and she stops stripping for a time; eventually she’s lured back and reunites with Ramona, who cooks up a scheme to bring added security to both their families: they’ll drug high rollers with a mixture of ketamine (to sedate them and prevent them from remembering anything) and MDMA (to ensure they have a good time throughout the process), then max out their credit cards for as much as they’re worth. Scafaria portrays this shift as a feminist victory for Dorothy, Ramona, and the other dancers they let in on the play — they’re never photographed as glamorously as they are when they’re taking some Wall Street bro for everything he’s worth.

Hustlers doesn’t have much of interest to say about its characters or the wider financial structures that give them an incentive to steal from wealthy men. Some reviewers have compared the film to Martin Scorsese’s work, but Scafaria has little of his style, and her film lacks the social critique built into films like The Wolf of Wall Street or Casino. It’s spectacle as transparent and empty as a diamond.

Rian Johnson’s Knives Out Is a Fun but Unexceptional Whodunnit