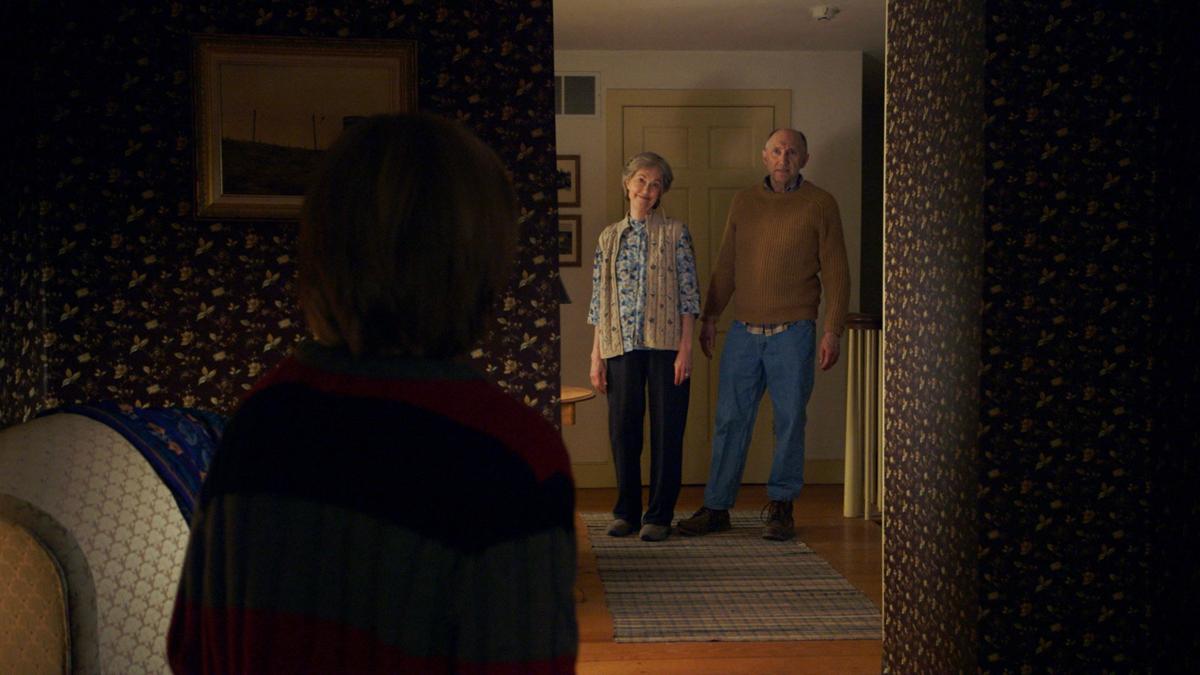 What better way to rediscover yourself than by going home? After a string of critical and commercial disappointments, 2015’s The Visit feels like a lost and confused M. Night Shyamalan returning to his true origins (film school, of course) in an attempt to relearn exactly where his talents lay. Full of unfocused experimentation and wide-eyed tenacity, this low-budget thriller is a hodgepodge of the writer/director’s best and worst traits, a clunky yet fascinating look at the passionate persistence of a humbled filmmaker trying to claw his way back into cinematic relevance.

The micro-cost of the project came about seemingly out of necessity; while the quality of his post-Signs movies is always debatable, there’s no doubt about the direction M. Night Shyamalan’s career began to head after The Village. What had risen so fast began a meteoric descent, smashing through rock bottoms with each new critically derided financial failure. Things just seemed to be getting worse and worse for the director once (probably unfairly) dubbed ‘The Next Spielberg,’ and so perhaps a step back was needed following the embarrassing After Earth.

That step back was a ‘found footage’ film about a pair of plucky youngsters taking a trip to rural Pennsylvania to visit their grandparents for the first time. The older girl, Becca, is a wannabe filmmaker who (of course) brings cameras along to document the experience with her younger brother, Tyler. Strange behavior and odd occurrences lead to suspicions that something at this creaky, old house is amiss, and perhaps even sinister. Like most M. Night Shyamalan movies, there’s a spooky mystery afoot, but here the Twilight Zone nature of his storytelling is less about message and more about serving as a vehicle for eerie imagery and tense sequences, two of the things that Shyamalan the director does best. Unfortunately, entries in this genre also tend to have a lot of dialogue, which is one of the things that Shyamalan the writer does worst.

These two aspects are consistently at odds with each other during the entirety of The Visit, turning the experience into a roller coaster of the riveting and the repulsive. One minute you’re cringing as a child actor tries his best to rap while his sister drops obnoxious film school terms like mise en scene into every conversation, and the next you’re glued to your seat as they play hide-and-seek in the crawl space under the house while being stalked. For every awkward attempt at humor like “Holy Mother of Sarah McLachlan!” there’s a nail-biting, unbroken shot that involves cleaning an oven. From an incredibly stilted conversation with a doctor (who could not be less convincing as such) to a disturbing game of Yahtzee, The Visit will have you laughing at it right before making you frightened by it.

The Visit is pure, unfiltered Shyamalan, unrestrained by the pressure to deliver a meaningful blockbuster, and it’s fascinating to behold the various choices he makes. The most obvious is the ‘found footage’ shooting style, a concept notorious for the often eye-rolling explanations it immediately requires: why is someone holding a camera through all of this?  The answer is, of course, that no realistic human being would, but the ‘aspiring filmmaker’ schtick would have at least been only moderately preposterous (at least for half the film) if not for Shyamalan’s inability to resist his normal penchant for stunning cinematic compositions — so why bother with it at all? In the end, it’s hard to argue that the style contributed in any meaningful way to the final product; those tense scenes would have been just as haunting (and possibly more so) without the ‘you are there’ aesthetic, and that stilted dialogue would have been much more suitable to something much less ‘realistic.’

The decision gives out two vibes: stepping out on a creative limb, but doing so with a safety net. By opting for this style, Shyamalan could experiment with his own visual skills, challenging himself to work within a set of conditions. He had to find ways to elicit through imagery the emotions he aimed for without the benefit of his usual bag of reliable tricks — no birds-eye views, slow push-ins — and perhaps discover something fresh along the way to add to his repertoire. It’s an admirable exercise that seems to have paid off; The Visit finds unique angles not only to deprive audiences of information but also to reveal it — building blocks of successful suspense. As stated before, that element works very well. However, the genre assists him in another way: with the ability to hide less-than-believable actions behind the already ridiculous established conventions.

Shyamalan is no stranger to far-fetched ideas of human behavior; it’s on full display in nearly everything he writes and is often one of the focal points to his criticism. The Visit is no different, but this time the impact that behavior generates is both magnified and diffused by the type of film that it is. The premise alone defies belief: that a mother would send her kids — children, mind you — off by themselves, traveling across the state to spend a week with total strangers (parents or not, she hasn’t spoken to them in years) without even showing them a picture of who they’re supposed to meet… well, you tell me if that seems likely. For a genre where things are supposed to feel natural, this is as contrived as it gets. But decisions like this are softened by the constant presence of a camera that lets audiences know this story has nothing to do with reality. Disturbed in the middle of the night by a crazy Nana? No biggie — keep rolling! Running from a crab-walking witch under the house? Make sure to get it on tape!

No matter how bad things get in the ‘found footage’ film (and they get plenty bad by the end of The Visit), someone always manages to record it. This idiocy is nothing new to the genre, where characters often aren’t so much humans as pod people; it’s an alien’s version of what we earthlings act like. With this approach, it’s hard to feel that anything here is real — and when you can’t trust the basic concept to be believable, then nothing else needs to adhere to that standard. This means Shyamalan can go about his business of concocting absurd scenarios without suffering the types of consequences that dramatic eye-rollers like The Happening incurred — not a bad idea for what is essentially a confidence builder.

So, in the end, you either buy in to the ridiculousness or you don’t. Yes, The Visit is stupid, but it also can be fun. Yes, it’s at times cringe-inducing, but it also elicits spooks. This is Shyamalan for better and worse, but distilled into a more pure, entertaining form. He’s raw and confused, but — no matter what you think of the final product (I’m still not sure I’d recommend it to casual viewers) — he’s once again interesting, and his considerable talents are on display. Apparently, the retreat worked. The film was a comeback of sorts, amusing to critics and massively successful at the box office. After the follow-up success of Split and the excitement over Glass (an unfortunate regression), Shyamalan’s career had a chance to press forward again.

Split packs in the fun as it unleashes the beast

Lady in the Water is a Shallow Attempt at Symbolism