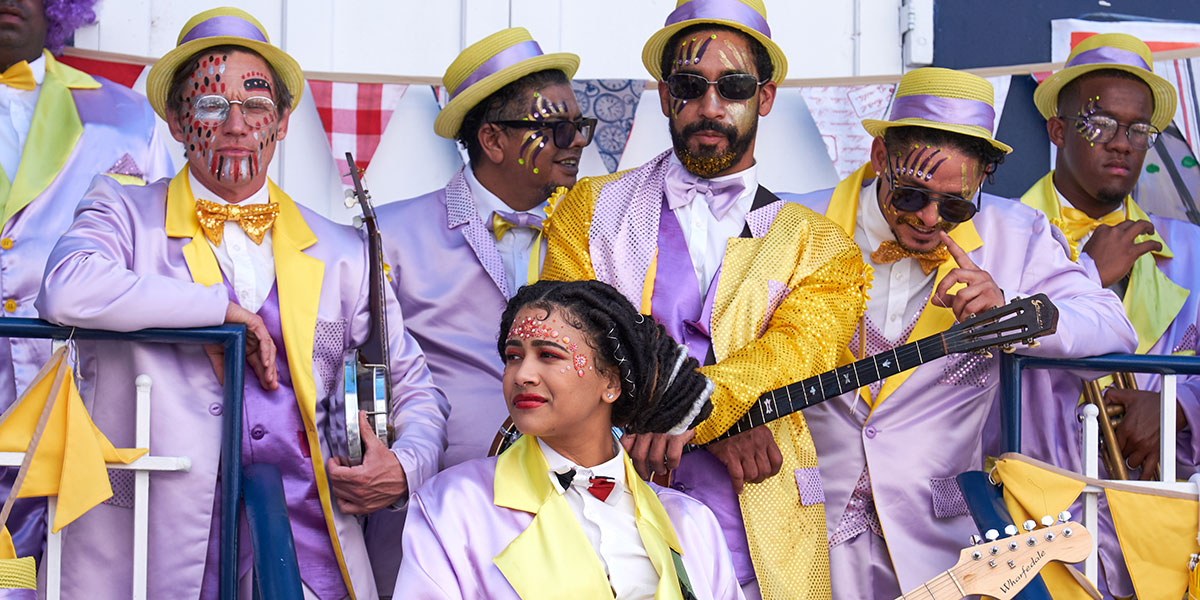 Music is the food that feeds the soul. That holds true regardless of what background one hails from, what corner of the globe one calls home, or what genre of music is implied. Run DMC, Celine Dion, BTS, Beethoven, it doesn’t matter. Music can also say a lot about a culture and hold meaning far deeper than what outside appearances suggest. Such is the case for the protagonist in the South African heist comedy The Umbrella Men, which held its international premiere at TIFF 2022. Co-written and directed by John Barker (Lev David and Philip Roberts also scribed the story), the picture invites viewers for a relatively light romp through some Cape Town sneaky business by way of an annual carnival the townsfolk hold dear to their hearts.

The film opens at the funeral of the titular jazz and folk band’s founder. Son Jerome (Jacques De Silva) is a successful music producer based out of Johannesburg and pays his respects during a brief spell back in Cape Town. Meanwhile, old-time friend Mortimer (Keenan Arrison) finally completes his prison stint and re-acquaints with Jerome. Auntie Valerie (June van Merch) implores Jerome that he take over the Geoma Club where the Umbrella Men earned its reputation for years, but the transfer proves to be more challenging than imagined. Number one, Jerome isn’t keen on staying around Cape Town. Number two, the bank explains that the club owes close to a million due to bad loans and collateral. In swoops Tariq (Abduragman Adams), a local mob boss who operates a rival musical troupe, the Maulers. He’d be happy to run the place. Familial pride and an urge to keep the music alive push Jerome to band together with some unlikely characters to rob the bank during the January 2nd carnival celebrated by, among other people, the local Cap Malay (Muslim community).

One of the many benefits of watching a movie at a film festival the likes of TIFF (Toronto International Film Festival) is the opportunity to discover worlds and cultures previously unknown to the masses. Director John Barker’s The Umbrella Men, whilst attempting to supply the humorous antics that all proper heist comedies should, allows curious viewers to spend a couple of hours in a place and with people who arguably few outside of South Africa are familiar with. The Muslim community of Cape Town isn’t exactly one that makes headlines internationally.

Moreover, the dialect with which its characters speak jumps from English to something other than what many may predictably say is Afrikaans (though no fault of their own. Afrikaans is the one non-English language most people think South Africans speak). Jerome, Mortimer, and the gang converse in something called Afrikaaps, which is akin to Afrikaans but has different linguistic roots. To top it off, the film’s action culminates during the Cape Minstrel Carnival, an event with roots dating back centuries when slaves were provided a single day off from work during the entire calendar year. These days, the festival is a joyous, colourful affair anyone can join in on.

In large part, these flourishes are what keep The Umbrella Men afloat. That isn’t to say that the picture has nothing of value to offer apart from the local flavours. Several of the performances are engaging and show moxie, although that’s truer of supporting players than the stars. Jacques de Silva is solid as Jerome. A charmer, good-looking, wrestling internally with his current life and the one proverbially calling to him, he’s a reasonably well-rounded protagonist. The acting is fine, if unspectacular. The same cannot be argued about Keenan Arrison, who looks awesome but whose performance is much stiffer. All in all, the supporting cast are the ones who shine the brightest, most notably Shamilla Miller as Jerome’s girlfriend Keisha, June van Merch as Auntie Valerie, and Joey Rasdien as Tiger, whose day-to-day business is the fish trade but still flicks his cast into the underworld when the money sounds right.

The story’s flow is rather loose and light, akin to how jazz is often interpreted. It takes its time getting to the heart of the matter, often pausing to showcase slow-motion footage of the characters walking, talking, and enjoying themselves as some excellent non-diegetic big band music roars. It feels like the film is playing at the uneven pace of a piece of jazz music that zips along when it wants to, then takes it slow for however long it deems appropriate. One thing is for certain: unless viewers are allergic to jazz, bluesy, or big band instrumental music, the soundtrack is a joy.

John Barker’s artistic background presumably goes some way to explaining the free-flowing, uneven pacing. Many of his previous efforts are either comedies or documentaries (his best-received film is Bunny Chow, which incidentally also premiered at TIFF back in 2006). The Umbrella Men has a story that could be efficiently told in 90 minutes but takes nearly 105. The first hour or so is rather strong when many of the interpersonal friendships and rivalries are established within this different sub-culture. Barker’s picture is less interesting when it shifts gears to do “heist movie stuff.” The caper is okay, although no one will confuse this with what the Danny Ocean gang pulls off, however circus-like their misadventures are.

Other elements that take the film’s quality down a notch are the editing and blocking, particularly the latter. The geography of early moments in some scenes is honestly difficult to understand. Actors’ positions lack clarity. In other instances, edits to the next frame are too abrupt, to say nothing that they cut to more awkward blocking. Without wanting to come across as too disparaging, some of the film’s technical merits are amateurish. (Author’s note: an online screener was provided a few weeks ago at the time of this writing. Perhaps the version playing at TIFF is smoother?)

Thankfully the positives outweigh the negatives, albeit not by leaps and bounds. The Umbrella Men’s sense of style, its music, the supporting cast members, and the exciting chance to learn a bit about an unknown culture are highlights. On the flip side, for a film advertising itself as a heist movie, it takes a while to get going and the theft itself is pedestrian. There is also a discernable lack of polish. Come to think of it, it’s never clear why the hero’s band is called Umbrella Men. There aren’t many if any umbrellas to be seen. Considering the director’s love of music and documentaries, he’d probably make an excellent movie about the Minstrel Carnival itself.

P.T. Anderson’s The Master at 10: As Intoxicating as Ever