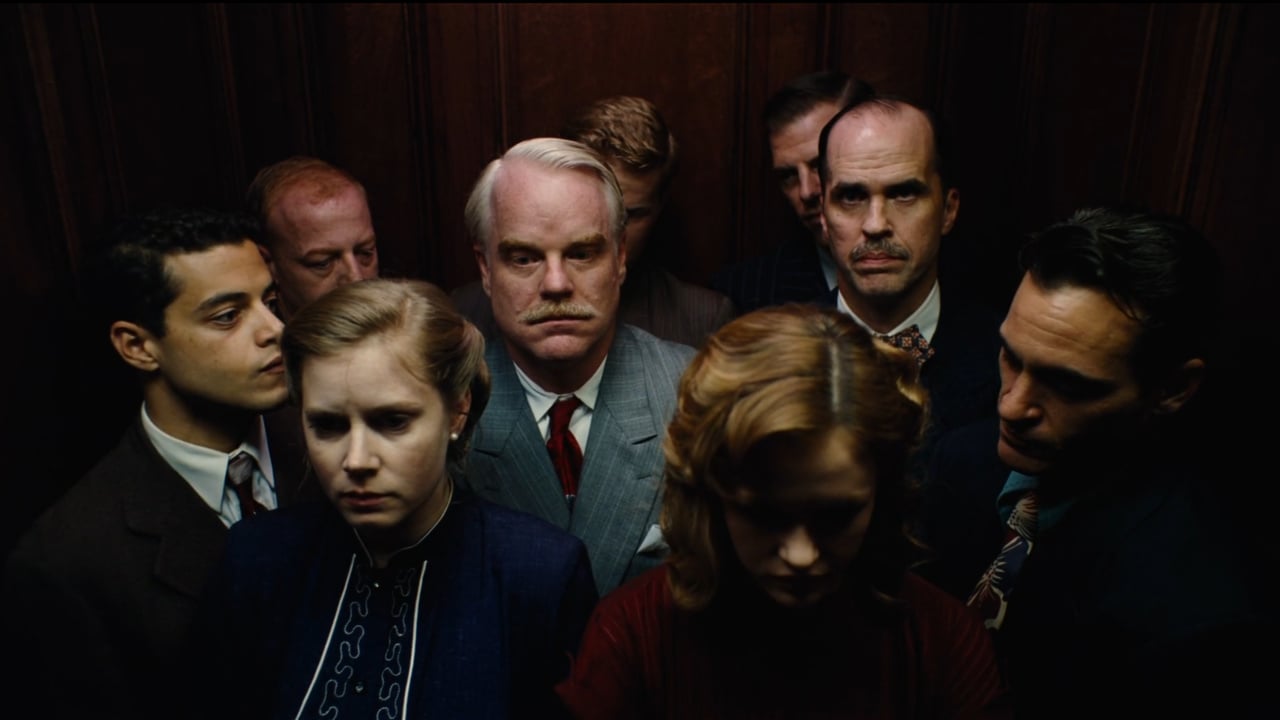 Paul Thomas Anderson’s The Master (2012), appeared on cinema screens as an instant (cult!) classic, blowing away both critics and audiences alike with its unflinching study of psychological deviance and cult personality. Particularly notable is Anderson’s interest in intoxication: the ways in which we can become stupefied and unthinking. The pairing of two main themes of alcoholism and cultism reveals the parallels between – the dangers, and seductions, of both.

The film follows Freddie Quell (Joaquin Phoenix), a veteran who recently returned from the World War II Navy and who attempts to reintegrate into society. With a litany of psychological difficulties, anger issues, and misogyny rooted in his sexual frustration, Freddie struggles to find a healthy purpose or place.

Ironically, his one skill, the uncanny ability to make moonshine out of numerous toxic liquids, only adds to his chaos and decline. From bomb fuel to photo-developing fluid, from mouthwash to paint thinner, his alchemical concoctions are dangerously potent. After one such mixture leaves an old man dead, he quickly flees a mob, finding a deceptively safe haven in the Master’s cult.

Karl Marx once remarked that ‘religion is the opium of the people’. While Anderson’s cult in The Master is composed of a wealthy and privileged class, the film still demonstrates how spiritual leaders can exercise control – in this case, over those with more money than sense. With a distillation of spiritualism, snake oil, and Scientology, the eponymous ‘Master’ of the cult (Philip Seymour Hoffman) intoxicates his followers. His charisma is spellbinding, even to a wary audience.

Freddie, as a working-class army vet, feels noticeably out of place in the constraints of this wealthy milieu. Stumbling into the wedding of the Master’s daughter, he is only accepted into the ranks after the Master himself becomes addicted to Quell’s alcoholic ‘potions’. He recognizes another agent of intoxication. Enlisting Freddie to make him more ‘potions’, and slowly taking him on as his right-hand man, the Master begins to view him as a kind of experiment in his cult brainwashing. Is it possible to indoctrinate a force of pure chaos? Can one live without a master?

Yet, this attempt at changing Quell does not leave the Master untouched: it’s very much a two-way street as we see his façade begin to crumble under Freddie’s intoxicants. Anger and alcohol work as potent fuels. The lines between Freddie’s own alcoholism and the stupor of the cultists become increasingly blurred.

With this in mind, there is a certain irony in how many of the cultists look down on Freddie. Throughout the film, he is labelled, with a tone of distaste, as a ‘drunk’. Failing to see their own intoxication, their sneering only reveals their own blindness.

Class underlies many of these interactions. After all, isn’t the cult just a more privileged form of dependency and intoxication – one bought through privilege and monetary donations, rather than mixed in a mason jar? All of the characters are in the throes of addiction. The Master holds the whole group together and weaves them all in his web. But perhaps even this charismatic center cannot hold.

Part of Anderson’s filmmaking genius is his lack of judgement. We are shown these characters with raw emotional honesty. While often despicable, we can’t help but feel for them in their addiction. Even the Master himself seems lost in his pseudo-spiritual ramblings.

Perhaps he too, like Freddie, is high on his own supply.

The Umbrella Men : A Heist Film with Great Style, Not a Great Caper