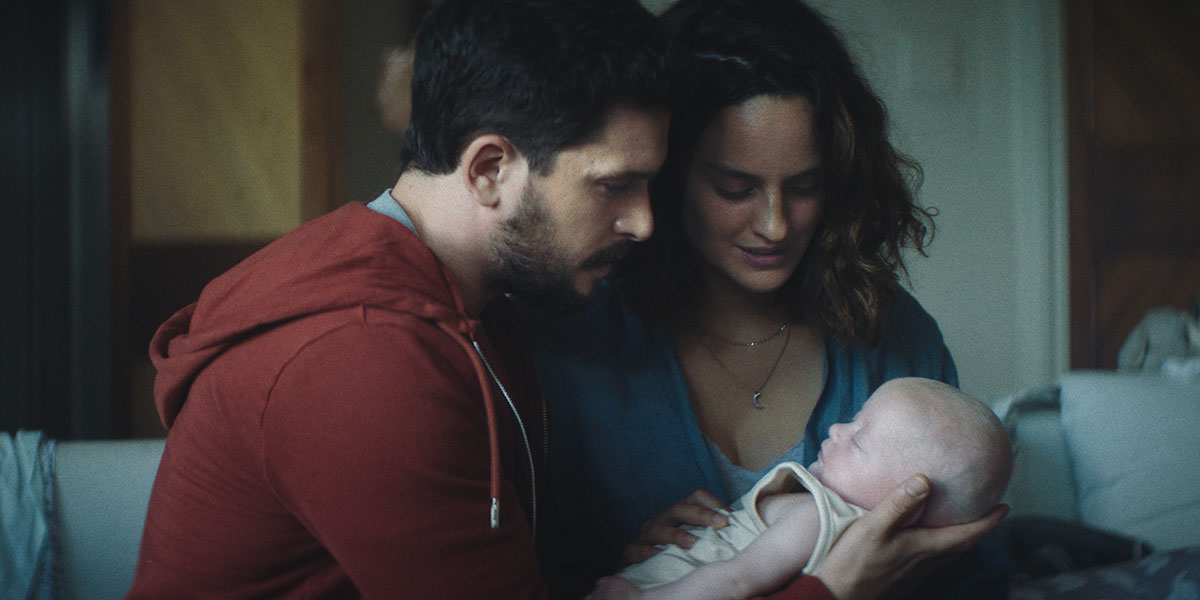 Early on in Bess Wohl’s eerie and uncannily enthralling feature debut, Baby Ruby, someone remarks: “It’s a beautiful thing, having a baby”.  Wohl then begins to dismantle that sentence piece by piece, delving into the recesses of psychological horror to unearth the very real terrors of post-partum psychosis and the chaotic path to recovery. For all intents and purposes, it is the cinematic realization of the saying: “Motherhood is hell”.

The film taps into the inherent truths and hardships of the maternal process, unearthing the terrors of this uniquely human experience, which most women willingly surrender themselves to. Yet, it thankfully doesn’t rely on overindulgent dialogue and pointed statements to make these revelations, instead, the film underpins its meaty exploration of these issues with a stellar sonic and visual design—utilizing the medium to its full advantage, forcefully and horrifically cementing the presence of an all-consuming infant.

Noémie Merlant stars as Jo, a vlogger and influencer who thrives in her tightly curated world of DIY posts and inspirational quotes. She has the picture-perfect life— a renovated woodland home, a handsome husband (Game of Thrones’ Kit Harrington), and a baby on the way. However, after giving birth, the demanding and restless life of a mother takes an immediate toll on her, throwing her life and marriage into disarray.

The pack-like neighborhood moms effortlessly keep their babies happy, sparing no opportunity to offer a relentless volley of platitudes on the joys of motherhood to the now-flailing Jo. Her husband is at a loss on how to help, while his mother (Jayne Atkinson) attempts to help Jo by shedding light on her own harrowing experiences. They prove to be of little help, as Jo is convinced her baby hates her, only lashing out against her when she is alone— further pushing her down the frightening abyss of motherhood.

While Bohl’s story is the epitome of a waking fever dream, it never becomes a gloomy slog. Instead, it’s imbued with a playful and inventive campiness that is emblematic of the absurdly torturous realities of parenthood, and how it can take an ethereal toll on the processes of maternity. No mother is perfect, and the anxieties and pitfalls that come with accepting that are captured here with a bracingly honest, yet otherworldly lens. The film is a bold confrontation with all the terrible and disturbing thoughts one has about their babies and the never-ending onslaught of sleep deprivation and impossible expectations that come with them.

In Wohl’s world, newborns take on a parasitic form, not only sucking nourishment out of their mothers but their souls as well, taking their sanity away in exchange for life. Her taut and confident direction, along with her delirious editing and gorgeously subdued colour palette eloquently encapsulate and embolden the film’s depiction of a hellish, baby-crazed existence.

Yet, despite its honest and searing observations regarding the physical and mental toll of a maternal undertaking, the film is at its best when it leans into its more psychological and abstract forms of storytelling. Enveloping Jo in a cacophony of ceaseless wails, a warped sense of time, and a shapeshifting reality.

Merlant builds off her excellent work in Portrait of a Lady on Fire, bringing forward a much-needed versatility that does justice to the frenzied story. Being both understated and outlandishly bizarre in her portrayal of a woman on the verge of madness. Harrington sheds off his Game of Thrones persona well, as he nails the mundanity and simplicity of his all-American husband, whose world is rocked when his wife can’t deal with the pressures of maternity.

Atkinson is also a standout as a sweet but unnerving presence whose aim to lessen Jo’s maternal pressures only further exacerbates them. Meredith Hagner as the alpha of the neighborhood pack, compliments the film’s foray into the uncanny valley, spearheading many of its comedic highpoints.

Baby Ruby is a confident and piercing debut that uncovers unpleasant but vital truths about the experience of motherhood and post-partum depression. While there are hammy moments sprinkled about, they aren’t enough to sink this film’s inventive and sincere depiction of maternal unraveling. While it makes the prospect of parenthood deeply horrific and unsettling, it does meaningfully probe you into ruminating on the moment you finally become one, and come to terms with your infant’s score of incessant, dread-inducing wails—happy parenting.

The Umbrella Men : A Heist Film with Great Style, Not a Great Caper