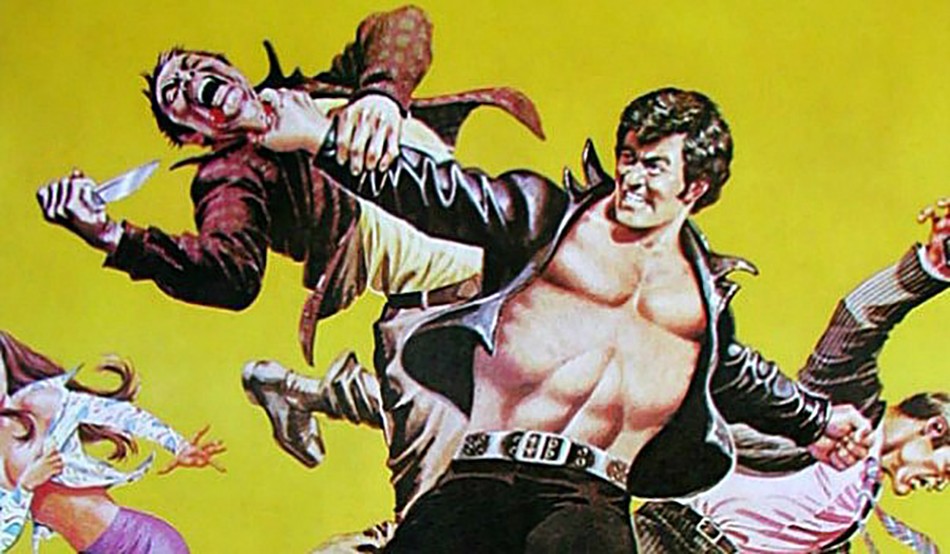 This 1974 cult, controversial classic opens the only way it knows how: in a prison cell as a convicted murderer, Tateki Shikenbaru (Masahi Ishibashi), awaits his execution whilst practicing martial arts stances. The prison guards send in a priest to pray for Tateki, but the latter immediately recognizes that his unexpected visitor is no priest. He is in fact a contract bounty hunter named Takuma Tsuguri (Shinichi ‘Sonny’ Chiba). Tsuguri has been sent to extract Tateki from prison at the behest of the criminal’s sister and brother. Following a death-defying escape (literally, in fact), Tsuguri returns home to his buddy Rakuda Zhang (Goichi Yamada) where a new mission commences, one involving the beautiful Sarai (Yutaka Nakjima), heiress to massive East Asian oil magnate. Everyone is after her, including the yakuza and Hong Kong gangsters. There is no rest for the weary!

Some films live on in infamy in film history. In some cases, their reputation rests on their horrifying quality, other times in large part to their controversial subject matter. The Street Fighter, directed by Shigehiro Ozawa and starring the popular Sonny Chiba (whom Western audiences probably discovered for the first time as the leader of the Crazy 88s in Quentin Tarantino’s Kill Bill Vol.1) is neither poorly made (more on that later), nor does it advertise particularly insidious themes. Nay, it made its mark during the kung fu craze of the 1970s by showcasing bold, adventurous ways to depict amazing action scenes without ever holding back on their brutality. What’s more, the film’s protagonist is really much more anti-hero than a hero. Even though some of the plot lines are absolutely ludicrous and hold little water, there is a level of unabashed glee in how the crazy proceedings are being depicted, which is generally as violent as humanly possible, or not humanly possible. The film exists in a gruesome, heightened reality The Street Fighter is the sort of movie action movie junkies salivate over and most other filmgoers run away from.

It would only be fair to take a few minutes and argue that this is by no means a perfect movie. There are several facepalm-inducing examples of amateurish acting, least of all from some of the few Caucasian actors that appear throughout and would probably fit perfectly in a Tommy Wiseau production. What’s more, attempts at figuring out the logic of each and every individual plot point would be an exercise in futility. Storytelling is not the film’s strongest element. Frankly, there are sequences when it feels as though director Ozawa and screenwriters Kôji Takada and Motohiro Torii could not care less about the plausibility of their yarn if they tried. In those respects, no, The Street Fighter is not a very good movie.

But then again, how many people, save those that are completely oblivious to the picture’s status in martial arts movie history, venture in hoping for air-tight storytelling? Part of the joy in watching The Street Fighter develop, from the initial prison escape sequence to the climactic fight at the docks amidst torrential rain, is witnessing how much pleasure it takes in being rebellious and violent. There is a devil may care spirit dominating the endeavour, clearly suggesting that the filmmakers care little for adventure movie tropes, such as protagonists being presented as beacons of light vanquishing pure evil. Ozawa’s picture is not a tale of light versus dark, but rather a brutal escapade into a world in which slightly less bad people go toe to toe against very bad people. The only virtuous character in the entire picture is Sarai, the celibate, newly crowned heiress to a large oil manufacturing corporation, and even then, by early 21st century, eco-conscious standards she is not someone especially easy to sympathize with. It becomes extremely obvious, very early in fact, that the film has no intention of providing audiences with someone they can easily relate to, a regular demand that, when not met, typically results in people shunning a film or stating that they ‘couldn’t connect with it’. Well, if anyone is hoping to ‘connect’ emotionally with The Street Fighter, they had best look elsewhere.

Truth be told, the only thing that connects unequivocally are Tsuguri’s fists and feet against the craniums and rib cages of his opponents. Ozawa and his crew don’t hold back, not for an instant, lovingly showing off the gory fights the anti-hero regularly engages in. Usually, he is the reason why fights start in the first place. Tsuguri is the sort of fellow that punches first and asks questions later, and since his skills as a martial artist are second to none, he gets away with his pompous demeanour more often than most of his foes would care to admit, if they are still alive after receiving a blow to the head that cracks their skull (an actual event in the film, hilariously depicted with a cut to an ‘x-ray scan’ of someone’s head breaking open). When men, and sometimes women, stand off against Tsuguri in preparation for a brawl, only two things are certain. First, Tsuguri will emerge victorious from the contest. Second, the loser will either die a horrible death or wriggle in immeasurable pain as Tsuguri marches on to his next opponent. Although it is fair to say that an ‘X’ rating in the early 1970s did not mean the same as it would today, that fact is not to be overlooked. The movie is spectacularly violent and mean-spirited at times. There are a couple of moments that would have modern-day audiences, who like to think they have seen it all, gasping.

Violence is one thing, style is another, and a film that can properly mesh the two earns extra points. Here is where the director’s effort and those of his cinematographers and editors shine brightest. It is interesting to note that The Street Fighter was made at around the same time that Bruce Lee gained prominence with films like The Big Boss and Fist of Fury. Apart from Lee’s inimitable quickness, his animalistic facial expressions are also a signature of his. Funny then that Sonny Chiba also goes through the entire movie with the most forcefully angry facial expressions whenever he is about to kick someone’s butt real hard. In fairness, it is said that imitation is the best form of flattery. Lee also moved quicker, even though the filmmakers and, to his credit, Chiba himself puts in admirable effort into making him seem pretty darn fast, but then again, who in the world was as gifted as Lee in martial arts cinema? Whereas Lee’s film’s advertised stupendous action with some light-heartedness, The Street Fighter’s modus operandi is being badass. Each set piece is dynamic and different from the last, with the filmmakers trying out a plethora of camera tricks, from canted angles to brilliant camera pans, in order to highlight the intensity of the battles. Say what one will about how little effort was invested in the screenwriting process and casting, it would be foolhardy to deny the inventiveness that went into injecting the movie with amazing style and dynamism.

Sonny Chiba would go on to attain legendary status in martial arts cinema. His persona and acumen are still fondly cited today, decades after he put his stamp on the genre. Suffice to say that The Street Fighter is still consistently regarded as a high mark in his career, the movie that announced to any and all that were willing to pay attention that Chiba had arrived onto the scene. As far as street fighters are concerned, Ryo and Ken never knew what hit them.

Dead Again Remains One of the Most Affecting Psychological Thrillers

Ranking All The Members of James Gunn’s The Suicide Squad