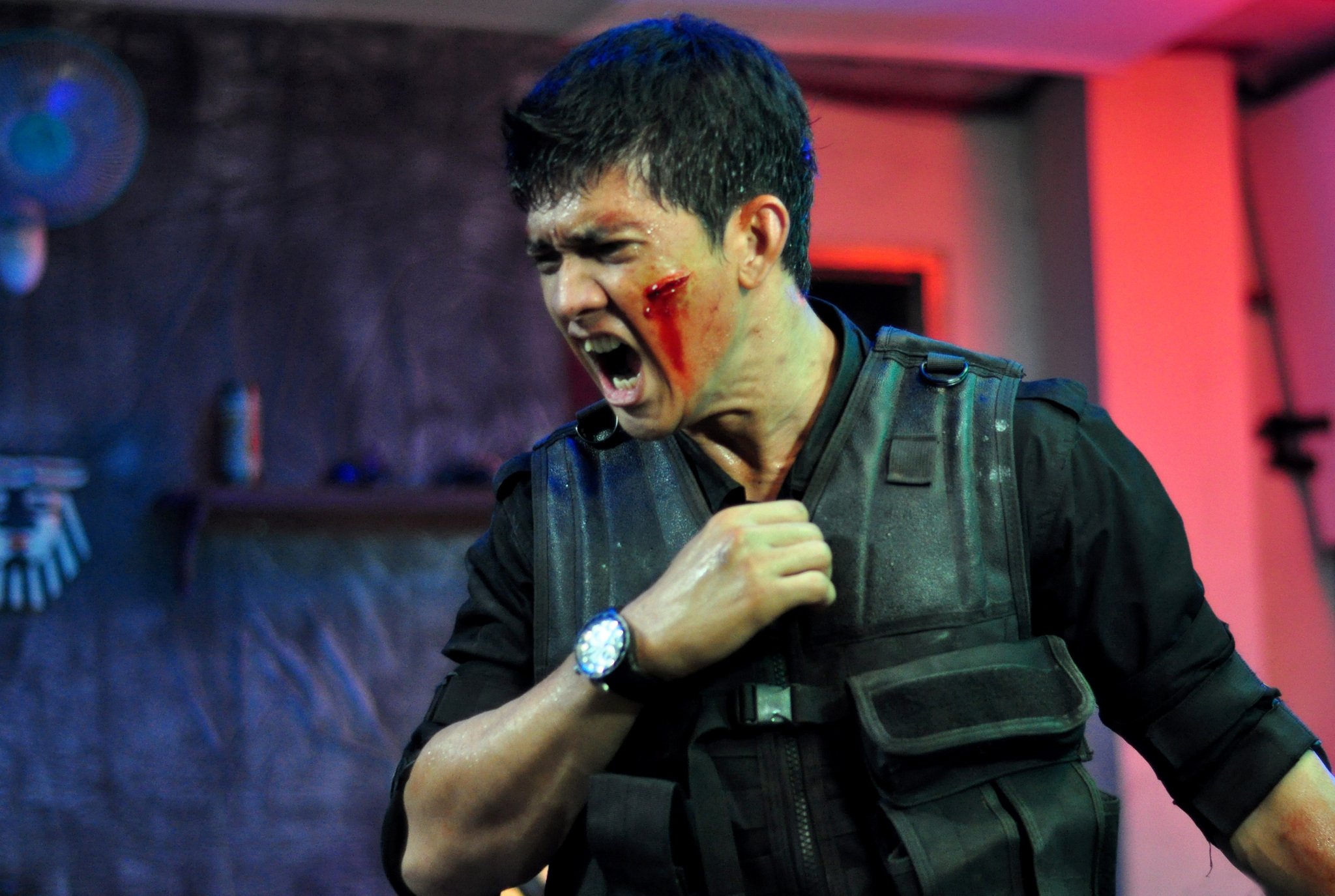 A decade since 2012’s The Raid: Redemption and it’s still one of the best examples of clean, efficient storytelling told through action. Simplistic in its premise, bare in its setting, and rarely attempting to exceed its grasp, director Gareth Evans and his cast and crew provided a masterclass in action filmmaking. While contemporary action films like John Wick and Mad Max: Fury Road have taken up more of the spotlight, The Raid: Redemption remains a seminal entry into the action film canon that few films have managed to replicate.

In its purest form, The Raid: Redemption is about an honest cop named Rama (Iko Uwais) who undertakes a dangerous mission in order to extract his criminal brother, Andi (Donny Alamsyah), before he winds up in more trouble than he can imagine. Part of an operation that turns out to be unsanctioned, Rama quickly finds himself forced to fight through an apartment complex run by an insidious drug lord and his two right-hand men, Andi and Mad Dog (Yayan Ruhian). What essentially begins as a siege film goes south quickly and becomes a survival action film with a tinge of horror and a whole lot of blood.

That’s where The Raid: Redemption becomes so much more than its “One versus 100” conceit suggests. Throughout the apartment complex, Rama isn’t just fighting gangsters and hoodlums – he’s fighting people barely making ends meet. He’s someone whose moral code is immediately thrown through the wringer because of one corrupt cop’s decision that will ultimately cost many of their lives. When the drug lord in question, Tama (Ray Sahetapy) offers free rent to whoever kills the police in his building, all bets are off. Evans quickly establishes the desperation of the people fighting and by proxy, their stakes in every fight.

By refusing to let the apartment complex simply be another seedy underbelly of a heavily-populated city, The Raid: Redemption lets its setting be just as nuanced as its protagonist. It’s also a film not afraid to revel in the grime of its setting; often punctuating its dirty corridors and unkept rooms with graphic violence and visceral sound design. It’s the way the film often sacrifices guns in exchange for fisticuffs and machetes that further immerses itself in its setting – a place where people aren’t afraid to get their hands dirty. Or as Mad Dog says when fighting Jaka (Joe Taslim): “Pulling the trigger is like ordering takeout…”

Mad Dog presents the rush that is always seen as the focal point of The Raid: Redemption. The use of pencak silat for its martial arts allows for intricate choreography and impressive fights, but it’s not all that The Raid offers. Even though Rama, Mad Dog, and Andi are all capable fighters, the others around them are not necessarily. Which is why moments like a machete slowly tapping on a wall as it nears Jaka and other policeman in hiding, or again, a machete being stabbed through a false wall in hopes of finding Rama and Bowo (Tegar Satrya) hiding in a doctor’s apartment, are engaging moments of tension that acknowledge the presence of other characters. It’s not all kicking and punching – sometimes it’s about using your brain.

This also bleeds into the way Evans cuts the film and cinematographers Matt Flannery and Dimas Imam Subhono shoot it. There are few moments where the camera leaves the room a fight is happening in. That fight is the main attraction and it pulls everyone towards it, including the camera. Action is cleanly cut, never breaking up the flow of action or cutting away from a landing blow. It’s the kind of benchmark for action editing that often gets left behind in blockbuster setpieces, but here it’s kind of the point. The audience needs to feel every hit the characters endure, and the camera is fine-tuned in a way that finds the exact way of capturing that feeling.

Another iconic shot from the film involves the gang of machete-wielding fighters that take on Rama in a claustrophobic hallway. The camera remains within the hallway, never leaving it during the entire fight even when Rama delivers one of the most brutal kills in the film: dropping a young man’s neck onto the bottom of a broken door frame. What works so well in that scene is one of its most chilling shots: a body laying in the hallway with no visibility on the inside of the room. It’s not followed by a shot of a person bleeding out on the other side of the frame; it’s followed by a close-up of Rama realizing what he’s done to someone. A man so caught up in survival he finds himself performing ruthless kills to people with their entire lives ahead of them.

The Raid 2 would ultimately expand upon Rama as a character and attempt to push against that moral code that dictates his every action, but it’s in The Raid: Redemption that the simplest version of that is presented. It’s a story told through action in a way that a lot of action films tend to forget. Why is this character fighting so mercilessly? Why is this fight shot from this perspective? Does this fight make sense to continue? It’s no surprise that other modern action films held in high esteem tend to also tell a story through their action such as Mad Max: Fury Road and Mission: Impossible – Rogue Nation and Fallout. It helps maintain momentum and stakes.

For many, there will be other action scenes and moments that stand out. The inciting incident that alarms Tama of the police presence in his building propels everything into a state of chaos; the moment when complete darkness is taken away by an itchy trigger finger; Tama’s paranoia that leads to the unforgettable two-on-one climactic fight scene that never relents; or even for some it’ll be the score, which might be Joseph Trapanese’s, or the momentum-building score for the US release done by both Trapanese and Mike Shinoda of Linkin Park. The splatter of blood and unnerving tension will deliver for horror fans while action junkies get the thrills they crave.

Needless to say, The Raid: Redemption is an extremely special movie to me. It’s the action film that got my wife into action movies. It introduced me to Indonesian genre cinema like the films of Timo Tjahjanto, Kimo Stamboel, and Joko Anwar. Every time an actor from The Raid appears in a film, I see it day one; the likelihood of me going out of my way to see a sequel to 2010’s Skyline would have been out of the question if Uwais and Ruhian hadn’t been cast in the surprisingly stellar Beyond Skyline. And anytime an actor shows up in a movie I would have seen anyways, I still get unreasonably excited (Ruhian and Uwais appearing in Star Wars Episode VII: The Force Awakens and Taslim showing up in Fast & Furious 6, for example).

Unfortunately, it’s also the action film that set such a high benchmark for choreography and editing working in tandem that it becomes a shame to see more-than-capable actors like Uwais and Taslim have their fighting butchered in movies like Mile 22 and Mortal Kombat, respectively. That’s ignoring the plenty of other action films not involving members of the crew that still disappoints me just because The Raid: Redemption seems like such an easy reference text for action directors to fall back on.

For me, The Raid: Redemption is just pound-for-pound an incredible achievement in action cinema. When reflecting on it, it always feels like it’s wall-to-wall action, but that’s what ends up so enrapturing about it whenever I turn it on (which at this point is an annual affair). It’s a tremendous blend of gore, tension, and martial arts that keeps itself grounded by never forgetting the characters. Ten years later and every punch hits just as hard as it did the first time.

Mickey: The Story of a Mouse Explores a Century of Disney’s Greatest Icon

David Cronenberg’s Crash at 25: The most Controversial Film You Will Ever See