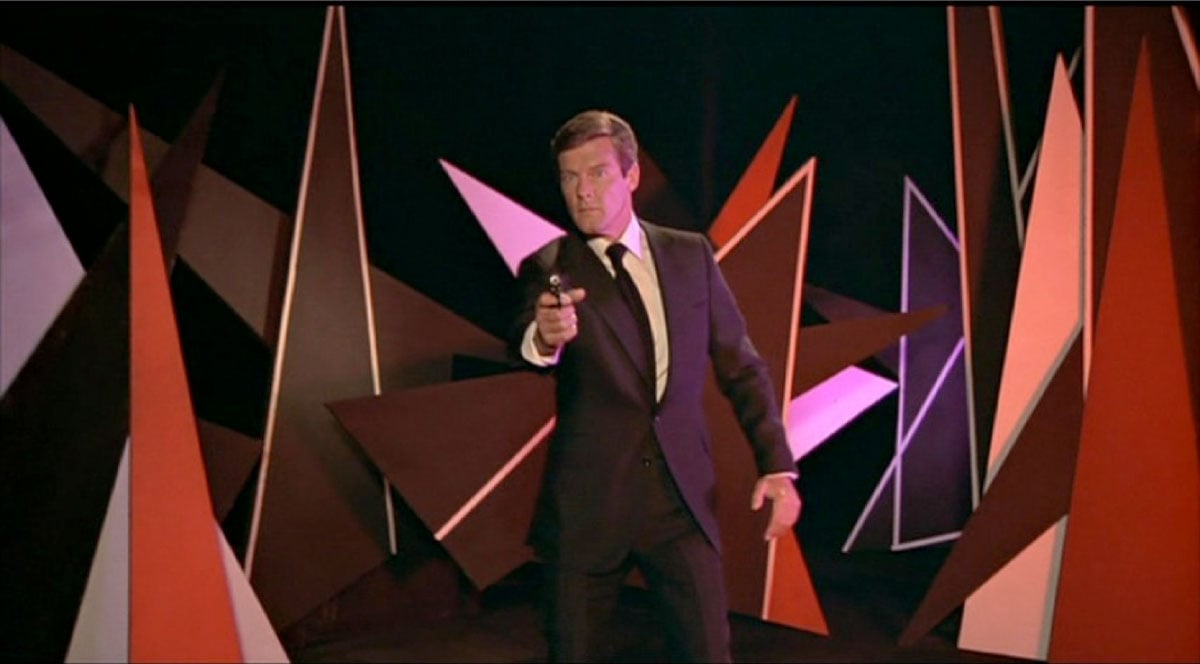 One hallmark of the venerable Bond franchise is its willingness to change with the times. Sometimes the changes feel organic, like the shift to a more brutish Daniel Craig after international terrorism took center stage in the early 2000s. Other times, however, you can smell Bond’s desperation to stay relevant. Such is the case with 1974’s middling entry, The Man with the Golden Gun.

Guy Hamilton’s fourth turn as Bond director (Goldfinger, Diamonds Are Forever, Live and Let Die) is a study in uncertainty. As Bond, Roger Moore is still searching for the debonair persona he would find in the upcoming classic, The Spy Who Loved Me. Surrounding Moore’s tentative performance are a collection of unfocused action set pieces, a less-than-formidable duo of Bond girls, and the most repugnant character in the series’ history. Add an ill-conceived leap onto the kung-fu bandwagon and you’ve got a recipe that would have poisoned a lesser franchise.

That’s not to say that The Man with the Golden Gun (TMWTGG) is without merit. First, the story is refreshingly simple. Bond must find and eliminate the world’s most deadly assassin, Francisco Scaramanga (Christopher Lee), who intends to blackmail the energy-starved West with a mysterious solar energy device (an iconic MacGuffin called the “Solex agitator”). As the dapper assassin Scaramanga—who collects $1 million for every hit with his little golden gun—Lee oozes a slimy charm that is a welcome addition to the franchise. Perhaps more than any arch villain before him, Scaramanga feels like a regular man who can relate to Bond. He may have grandiose designs on environmental extortion, but he’s mainly just a thug who excels at killing people. Sound familiar?

Scaramanga is introduced by a snappy pre-title sequence, as well. With the help of his diminutive henchman, Nick Nack (Hervé Villechaize), Scaramanga lures a hapless hitman into his nightmarish funhouse full of traps. Not only is this a clever illustration of Scaramanga’s killing prowess, it foreshadows the film’s ultimate showdown with Bond. It also establishes one of the most interesting villain-henchman dynamics in the history of the franchise. “If you kill him, all this be mine!” Nick Nack implores Bond; his loyalties split between protecting his master and feeding his own ambitions. It’s an extra layer of texture we don’t normally see from Bond henchmen.

The impressive shooting locales are spotted all over the Far East, including Thailand, Hong Kong, and Macau. Hamilton does a great job capturing the humidity and flare, keeping Bond in the streets and local establishments as often as possible. It also yields the film’s most ingenious set-piece; the wreck of the RMS Queen Elizabeth in Hong Kong harbor. The derelict ocean liner is cleverly transformed into the Far East headquarters for MI6. Another highlight is Bond’s low-altitude flight through the jagged rock formations in Hạ Long Bay. These geographical flourishes have become a staple of Bond films.

Sadly, that’s where the praise for The Man With The Golden Gun ends.

Even the normally-reliable John Barry, who penned the franchise’s most iconic themes and songs, falls prey to mediocrity. Though the title tune is undeniably catchy, Don Black’s insipid lyrics do little to help Scottish crooner, Lulu, who does her best Shirley Bassey imitation. This is definitely Barry’s weakest effort with the franchise.

It’s also the worst script penned by long-time Bond scribe, Richard Maibaum. Working from an early draft by Tom Mankiewicz and the original novel by Ian Fleming, Maibaum pruned most of the gamesmanship between Bond and Scaramanga. Instead of a battle between equals, Scaramanga feels more like a jealous half-brother with an axe to grind. It’s a missed opportunity for Bond to match wits and marksmanship with a superior adversary.

More glaring is Hamilton’s listless approach to the action sequences, including his continued obsession with excruciating car chases. Bond pursues Scaramanga through the streets of Bangkok before reaching a bifurcated bridge. In the film’s most iconic stunt, Bond executes a perfect corkscrew jump to traverse the broken and twisted bridge (bafflingly accompanied by the sound of a slide whistle). Making the chase even more intolerable is a curtain call from the racist Sheriff J.W. Pepper (Clifton James). As if Pepper wasn’t loathsome enough in Live and Let Die, he turns up to insult Asian citizens in their own country. Truly, this reprehensible character is emblematic of a time most Americans would rather forget.

Despite looking stellar in a bikini, Britt Ekland’s turn as Agent Goodnight is thoroughly forgettable. She’s completely useless as a field agent and barely registers a blip on the charisma radar. Her low point arrives in the final act when she accidentally activates a death ray with her ass. Faring even worse is Maud Adams as Scaramanga’s mistress, Andrea Anders. Bullied and subjugated by Scaramanga, Anders comes crawling to Bond, who promptly slaps and manhandles her. Anders looks less like a damsel in distress than a helpless victim of domestic abuse. Surely, Roger Moore must look back on this scene—obviously devised to toughen his image—with embarrassment and regret.

And let us not even discuss Bond’s brief detention at a kung-fu school. That he is rescued by two teenage girls is an unmitigated disgrace masquerading as a punchline.

What makes The Man with the Golden Gun particularly frustrating, especially when compared to similar missteps like A View to A Kill or Die Another Day, is how little fun everyone seems to be having. The humor isn’t zany enough to inject any camp, and the story (particularly Scaramanga’s reduced role) is too thin to be taken seriously. It’s stuck in the middle of what Bond used to be with Connery, and would eventually become with Moore. That it survived this transition is a credit to Moore’s natural charm and producer Cubby Broccoli’s determination. In that way, The Man with the Golden Gun is a curiosity amongst Bond fans; it’s hard to muster either enthusiasm or disdain for it. Perhaps, in the grander scheme, it’s the movie Moore had to make before he truly became James Bond.