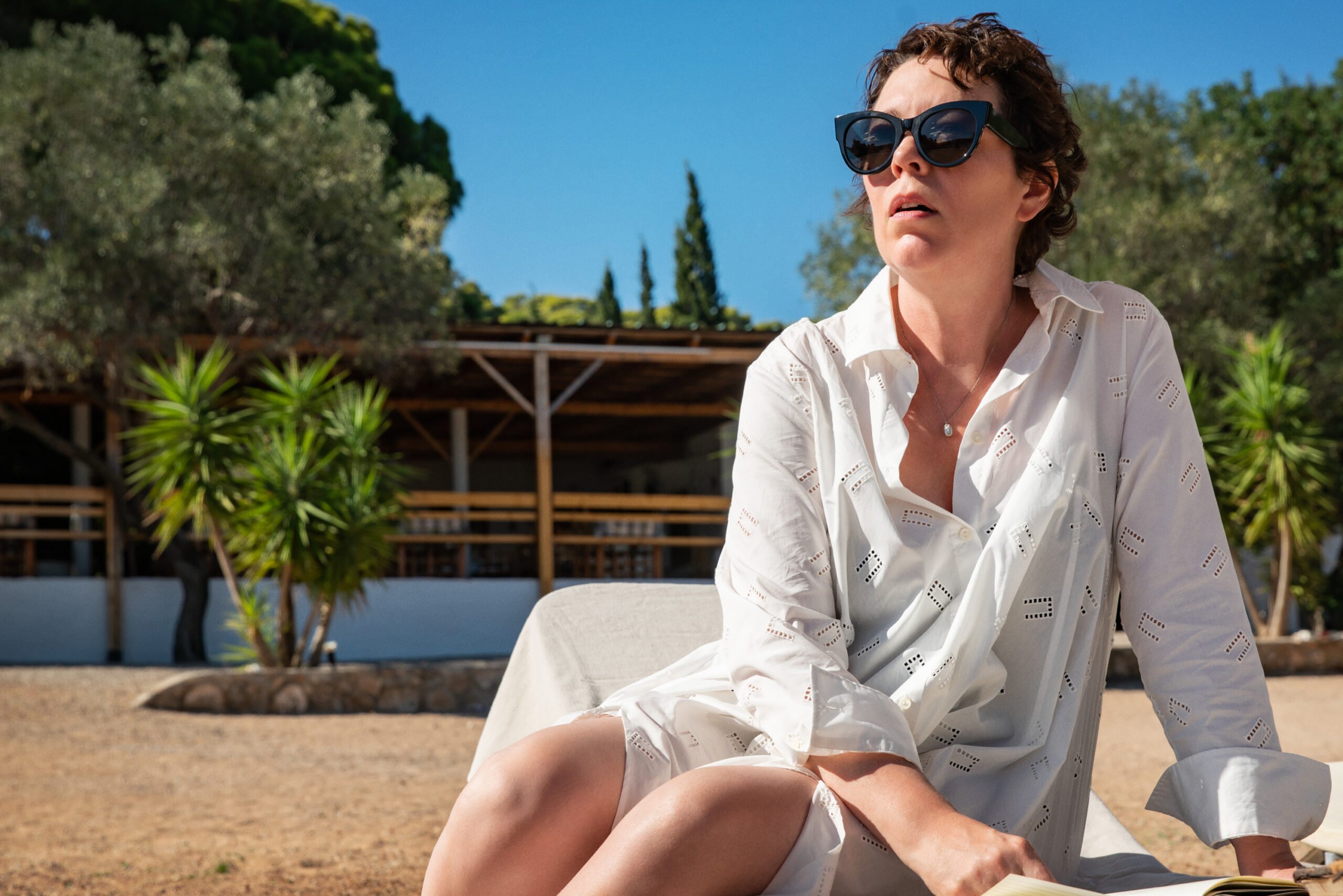 Nothing is ever just nice for the vacationing Leda (Olivia Colman): a picturesque bowl of fruit belies mold and worms already consuming the ripe oranges and grapes; her slumber is interrupted by a chatty cicada who lands on the pillow beside her; and a quiet beach enclave is invaded by a big, loud family. The disruptions that seek to turn Leda’s Greek holiday into a lived rendition of Alanis Morissette’s ‘Ironic’ are not unfamiliar to her– after all, she’s a mother.

The Lost Daughter is Maggie Gyllenhaal’s tremendous directorial debut; made only more impressive by the fact that she also wrote the screenplay, based on the Elena Ferrante novel of the same name. Gyllenhaal has fortified her own artistic prowess with her years of experience in the film & television industry to produce one of the year’s most arresting works. She delivers the decidedly female point-of-view and gaze necessary to give ineffable grace notes of nuance to the powerhouse ensemble of Colman, Dakota Johnson, and Jessie Buckley. She also possesses and exercises an empathy for the independent and haunted Leda that only a mother can offer. What Gyllenhaal makes universal is the loneliness inherent in motherhood and the paradoxical blend of repulsion and desire to the company of others.

Leda, and her suitcase full of books, arrive in Greece ready for some blissful solitude. Her peaceful expectations are quickly subverted by the arrival of a large family who frequents the same slice of Mediterranean paradise. Part of the boisterous clan is Nina (Dakota Johnson), a young mother whose relationship with her daughter triggers unnerving memories in Leda. Leda’s frenetic flashbacks resurface the fraught history she associates with raising her two daughters. Gyllenhaal presents them in a similar way soldiers are depicted recalling the horrors of war.

This is a view of motherhood we don’t often get in movies. In Leda’s flashbacks to her younger self, played by Jessie Buckley a.k.a. the greatest thing to happen since sliced bread, we see her struggle with the balance of being a mother and an independent person. Leda is an academic who is passionate about her work, wants to fuck, and loves her two daughters –all in all, a person. We don’t see a brilliant professor who unbelievably balances life and work with aplomb. Nor do we see the well-meaning mother besieged by nihilist monster offspring, cartoonishly hell-bent on nothing but anarchic destruction. Gyllenhaal simply presents a person who realistically bears much of the, as Leda puts it, crushing responsibility of motherhood, trying to pursue an intellectually fulfilling life while also tending to the chaotic but basic needs of her daughters –and guess what? It’s incredibly difficult and kind of sucks. Deflated by the lack of support and respect from her husband, young Leda makes the complicated decision to leave her family.

Even in our postmodern world, it’s rare to see mainstream works that depict motherhood as anything but a sacred honor. When we see struggling mothers depicted on the screen, the martyrdom of motherhood itself is the reward. The care and well-being of children are of course paramount but the uneven and unspoken responsibility of the traditional family unit means the mother, not the father, is expected to sacrifice her dreams and aspirations in favor of her children. Some people choose to embrace this position and really, God bless. Leda is not one of them.

Colman delivers yet another incredibly moving performance. She brings confidence and dignity to a single, middle-aged female character that tends to get glanced over or used as one-dimensional comic fodder. Gyllenhaal gives depth to Leda by brilliantly employing Colman’s array of talents. Colman’s well-timed comedic chops (see Hot Fuzz) are there to humble her when she overextends her confidence. Just as effective is her aching vulnerability when she confronts the echoes of her early life and the brief attempts to reach outside the confined loneliness she has constructed for herself.

There is a satisfaction Leda feels for the solitude she’s chosen; a life for which she mounts a prickly defense. When asked to move her place on the beach to accommodate Nina’s large family she politely refuses, leaving a sour taste in Callie (Dagmara Dominczyk), Nina’s sister-in-law and her husband Vasili (Panos Koronis). While Nina is eating dinner at a bar, she’s approached by Lyle (Ed Harris), the caretaker of her hotel. She grows weary of his small talk and asks to finish her meal in peace, after which she is immediately remorseful. What Leda has learned is she will not let anyone spoil her pursuit of a fulfilling experience. But she’s also realized once she’s pushed everyone away, all that’s left are her books.

The world at large won’t listen to her or take her seriously so she’s made her world smaller: her husband elevated the importance of his work above hers; her children wouldn’t listen to her pleads or demands; her academic mentor dismissed her work. She ran away from the demeaning elements in her life and desperately towards anyone who offered the regard she feels due –this leads to an affair with her well-versed and tantalizingly hirsute colleague, Professor Hardy (Peter Sarsgaard).

Her desire to be taken seriously is already handicapped by a world where men take precedent. This is most clearly illustrated in a scene where Leda attends a movie in a small outdoor theater. As she’s enjoying the movie, a group of loud young members of Nina’s extended family burst in and cause a ruckus. Her requests for them to be quiet are disrespected and her attempt to have an employee handle the situation is thwarted by the wise-ass teens. She tears up, confronted once again with the ineffectiveness of her own voice. She is helpless. The group of teens only stop once barked at by the imposing Vasili.

Nina grows attached to Leda, sensing their connection. Johnson adds more strength to the impressive ensemble, playing a young mother who is also left to care for her daughter while her husband is off doing husband things. Leda opens up to Nina while also keeping a secret from her. Throughout the film, Leda varies how close she is with those she encounters –attempting to find the “just right” spot to put them. It seems this game will never cease for Leda. She will always be in the lone center of the storm of trying to triangulate who, when, and how close.

The 355 Embraces the Worst of Action Filmmaking