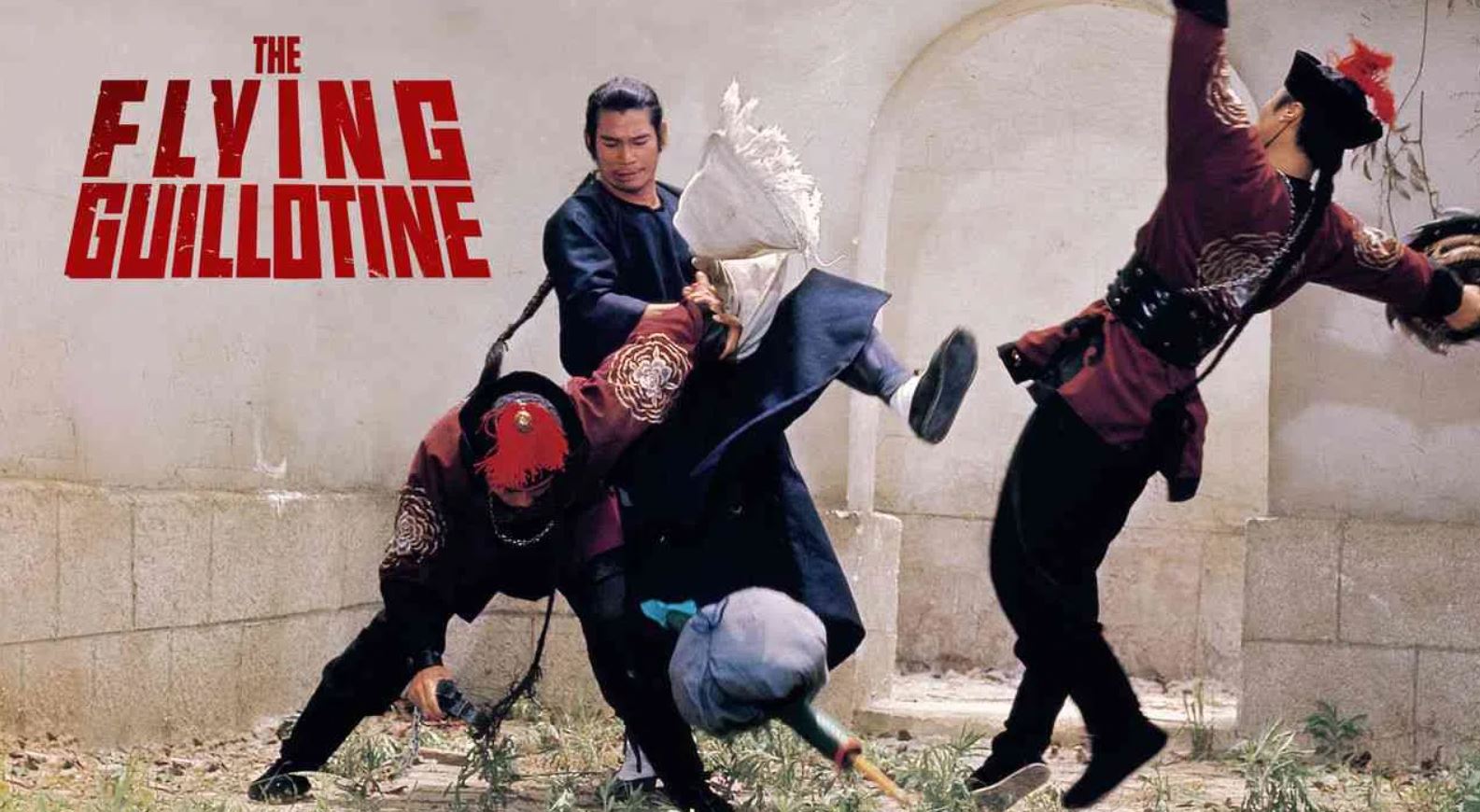 Despite all the genuine thrills Shaw Brothers films can produce, it is quite apparent that the studio always had half a foot planted firmly in ‘camp.’ Oftentimes, specific elements elevate the movies from being farcical. Mesmerizing action and a charming ensemble cast, such as in The Crippled Avengers, perhaps a unique central figure accompanied by interesting themes like in 36th Chamber of the Shaolin, or even a uniquely special representation of martial arts culture, of which Heroes of the East is a prime example. As is the case with most rules, there are exceptions, The Flying Guillotine, unfortunately, being one of them.

Guillotine transports viewers back to a fictionalized version of the era of the Ching Dynasty, a time when Emperor Ying Cheng (Yanng Chiang) holds the country in his evil grasp. The emperor lives by remarkably generous definitions of the terms ‘traitor’ and ‘dissidence’, resulting in the executions of a massive host of people who are more than likely innocent of any genuine crimes being. Two government officials are the latest unfortunate should to fall under Cheng’s suspicions, forcing the latter to command his chief military officer Xin Kang (Feng Ku) to concoct a new way to quietly dispatch his targets (out of fear of arousing unrest among the populace). Shortly thereafter his adviser presents the flying guillotine, an object consisting of a large sharp disc upon which are attached blades and a chain. One simply needs to toss the disc onto a person’s head, which will then passe through the hole in the middle of the disc, and yank the chain for the blades to separate the head from its neck. Xin then trains a small group of soldiers, among them the protagonist Ma Tang (Chen Kuan-tai), to properly use it. When it becomes increasingly apparent that those the squadron murders are innocent, Ma Tang quits, suddenly putting himself on the emperor’s most wanted list.

It is one thing to embrace a Shaw Brothers film, including its campy tones, because, as previously stated, so many of them make concerted efforts into bringing so much more to the table, be it in the writing, action, or character development. The Flying Guillotine‘s popularity must therefore surely rest on the massive quantity of camp that it serves its viewers given how it executes very little else well. When compared to so many other fresh, exhilarating entries in the genre, this one simply is not up to snuff. The most logical place to start dissecting this mess of a film is with the titular weapon. Some cursory research revealed that such a weapon may have actually existed at one time, although concrete evidence is lacking. With that curious information in mind, it can be concluded that director Ho Meng-hua does either one of two things with this movie: either he demonstrates that the flying guillotine is one of the most cumbersome weapons ever devised by Man or he simply does an incredibly poor task at representing it on screen in a manner that should arouse wonderment in the audience. The mere notion of carrying a huge bladed disc seems a bit ridiculous. Inconsistencies abound as far as how the weapon is described and seen in action to the point that it becomes impossible to be taken seriously about halfway through. How can these people never cut themselves when pulling the weapon back into their arms, especially given how fast it reportedly travels through the air? The filming of the attacks is among the worst cinematography and editing in any Shaw Brothers film. Actors simply toss the disc at random in one shot (which looks silly in of itself), and in the next shot, the scenery of which is totally different (studio room most likely), a cheap-looking version of the disc is seen zipping along, probably assisted by wirework, with a buzz-saw as part of the soundtrack. While Guillotine does make attempts at building a true story in its second half, much of the first half’s success rests primarily on the development and presentation of this weapon, and sadly, virtually none of it works. Even when hand to combat is of the order the results disappoint. Slow, laborious, uninventive moves do not a good kung fu scene make.

Equally objectionable is the script, which even by Shaw standards (again, the ‘camp’ factor) is rife with plot holes and lacking in any true emotional content. A lesson all filmmakers should understand, one’s hopes, is that simply because a movie depicts an event does not entail that it has earned that moment. Effort needs to be invested in constructing character, a sensible story in which the stakes raised have been clearly defined, a story in which all of these ingredients have had a minimal amount of time to simmer so that when the big moments occur, the audience will have a reaction. It does not seem as though any of that was taken into consideration when writing and filming Guillotine. The most egregious of these flippant attempts at playing on emotional chords arrive when Ma, having now temporarily escaped the emperor’s grasp, makes the acquaintance of Yu Ping (Liu Wu-chi), a beautiful street singer. She comes to the aid of Ma, who needs help feeling the emperor’s troops, and given that she, like most people, recognizes that emperor Cheng is a madman, she safely assumes Ma is an okay fellow. Fair enough. However, from that point onwards, all of their significant moments are incredibly rushed, from the decision to stick together despite the impending danger to the blossoming love, to the birth of their child. Rather than feeling earned, they are only ‘stuff’ happening. Various other plot points go unexplained, such as when a rival of Ma’s from military school betrays and kills off Xin Kang. Why? Various characters in the first portion of the story (at the military school) have changes of heart at the most inopportune moments and demonstrate their shifting emotions in the most obtuse ways imaginable.

Due to the nature of the stories told, there is a very fine line separating a good Shaw Brothers film from a bad Shaw Brothers. Despite whatever camp value can be found, The Flying Guillotine still takes a few monumental steps on the wrong side of said line.