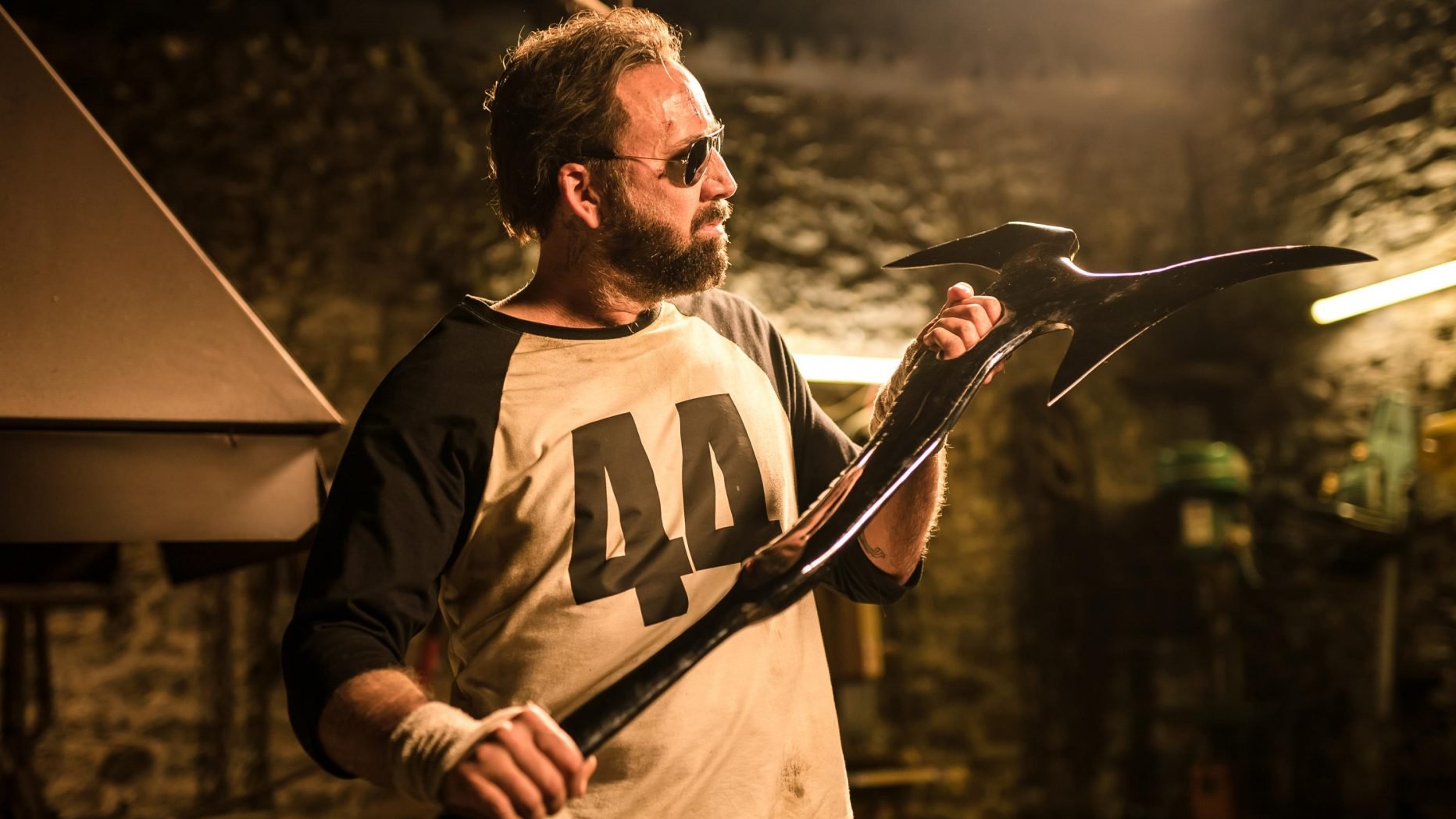 The picture of domestic tranquility, Mandy (Andrea Riseborough) and her husband Red (Nicholas Cage) live together in a remote cabin in the woods. It’s 1983, and they enjoy a simple life — until a cult leader (Linus Roche) becomes infatuated with possessing Mandy. With the help of particularly heinous demons, the cult commits terrible acts of violence. Mandy is as much about the rebellious, luminous spirit of the title character as it is about Red’s quest for absolute, no-holds-barred retribution. It’s pure entertainment slightly curbed by deep affection and a not-so-subtle indictment of blind religious faith.

Panos Cosmatos’ first feature, Beyond the Black Rainbow (2010), was a gripping journey into a surreal universe of confinement and time travel. Mind-bending beautiful (albeit confusing), the visuals of Black Rainbow sear into your memory no matter what you think of the story. In Mandy, Cosmatos’ narrative is much more straightforward, but just as lengthy in ramping up to the action. With the slow rise to the main attraction, we are at least privy to a careful but captivating presentation of Andrea Riseborough’s Mandy, and the unsettling crew of cult members that are sent to obtain her allegiance with sacrifices and a dangerous hallucinatory drug. Riseborough (Oblivion, Battle of the Sexes) is wonderfully defiant of her captors, while Cage is kept silently at bay until he frees himself. Mandy herself is a visionary — the book she consumes and the drawings she does in her spare time seem to be a premonition of an uncontrollable future. She is at the center of a vicious attack but manages to not be a victim. Riseborough projects a serene sense of confidence even as her world falls apart.

This lack of Cage until a good way into the film may be frustrating, but once he’s unleashed, the atmosphere becomes charged with endless opportunities for him to chew the scenery and amp up the excitement of what insanity he has in store for us. Pairing Cosmatos and Cage puts an ideal — if sometimes over-exaggerated — face to the director’s imaginative mania. A frenzied yet purposeful drive to cut down those who have committed unfathomable pain unfurls with gory precision. Horror fans, regardless of whether they admire Cage’s loony dedication to the role, will appreciate the exacting details and excess involved with Red’s hunt for the ruthless cult.

Cage wavers between deadpan and outright campy madness. In one stand-alone scene, he confronts utter devastation in a bathroom — screaming, plodding, ludicrously over-the-top, and appearing oddly vulnerable onscreen as we are isolated with him for an extended amount of time. Cage may have the effect of repulsing those who aren’t on board with his brand of outlandish characterizations, but for any audience that shows up expecting him to truly embrace showy melodrama and foolish-yet-forceful quips, the spellbinding carnage of Mandy won’t disappoint in the least.

Cosmatos and Aaron Stewart-Ahn expertly craft a fantasy space that lies hidden in plain sight. Vivid colors and visual nuance come together with Cage’s lunatic performance to create a delightfully dark atmosphere where blood flows freely, and a theater of the grotesque plays out with a marvelous fury.