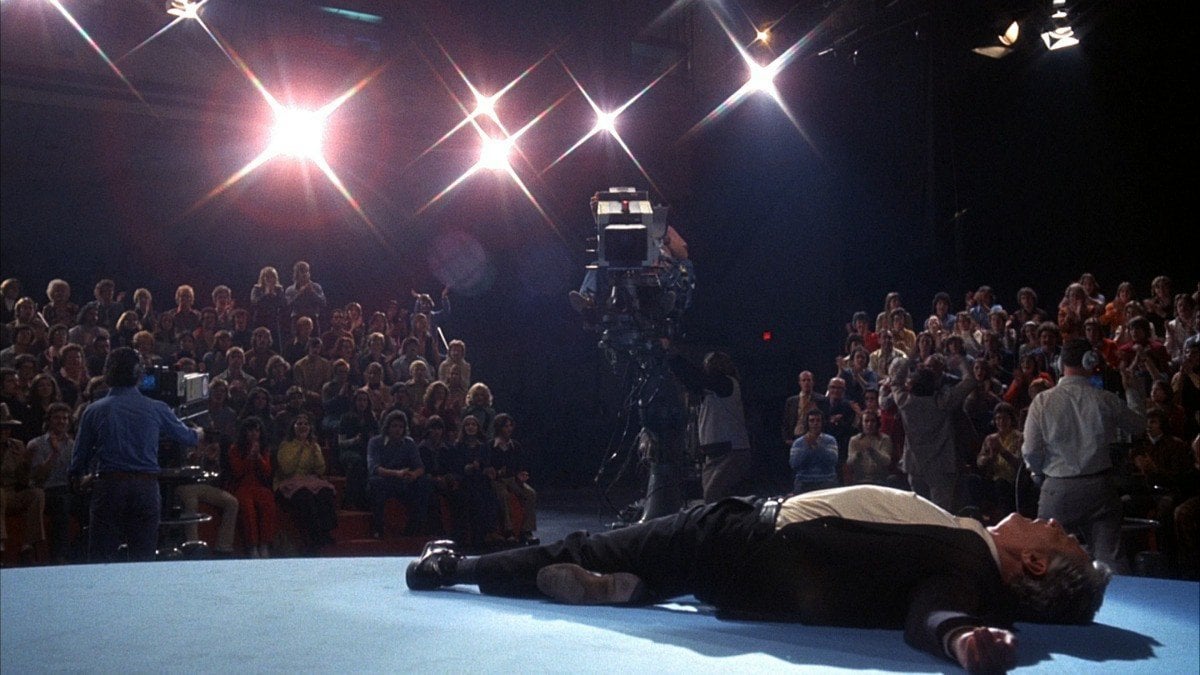 You can always pick out the true greats from the history of cinema by viewing them today and discovering that the product hasn’t aged, the message has not faded, and the era was not an inherent part of its magic. In fact, quite often, the visionary manner of true masterpieces means they sit in equal stead with viewers than they did then. Think of how The Godfather is still an immersive and essential viewing experience, how 2001 is just as inspirational with its maddening visual poetry today as it was in the 1960s, or how Apocalypse Now’s thematic resonance transcends the Vietnam war niche of war film genre and becomes something else entirely, something extraordinary. It’s another 70’s classic under the microscope this week, Sidney Lumet’s often overlooked satire Network, a film of mean spirit, cynically acerbic wit, and hostile reflection, which is even more poignant and relevant today than it was in 76.

Fictional TV network UBS suffers from a ratings drop, which means the death knell for their long-serving news anchor Howard Beale (Peter Finch), with the widower bearing the brunt of falling popularity and released from his contract. With only a couple of weeks left to enjoy the only thing left in his life, Beale horrifies his cohorts and the public when he announces on live TV that he will commit suicide on-air. Although the knee jerk reaction of a network in the process of a corporate takeover is to fire Beale early, the newsreader’s trusted ally and boss Max Schumacher (William Holden) convinces his superiors to allow Beale a chance to make amends and keep his post long enough to apologize for his actions. Initially appearing to play ball, Beale instead uses the opportunity to launch into a fearsome tirade against the evil of exploitative society and taps into the feeling of biting down resentment within the population.

With his days in front of the camera now seemingly over, the UBS executives stun everyone when they announce that not only will Beale be kept on thanks to a sudden surge of high ratings, but that the news division will be adapted to suit Beale’s “mad prophet” agenda. Put on the case by corporate enforcer Frank Hackett (Robert Duvall), the network’s head of programming Diana Christensen (Faye Dunaway), takes control of the program and, after a fling with Schumacher, ultimately oversees the feet-dragging veteran’s demise. A new prime time slot program, The Howard Beale Show, begins and exploits Beale’s deteriorating mental state in favor of a boom that rescues UBS from the doldrums. Attitudes at the top, however, take a sudden turn when Beale begins to direct his pandemonium spreading diatribe at the network and the shady companies buying it out, leading to some unconventional and shocking compromises…

In an age when TV channels have happily discarded their preset purpose in favor of delivering what the masses blindly demand, Network stands out as a harrowingly close-to-home snarl at the moral and principle discarding money men dispensing damaging messages for the sake of winning the ratings war. It’s been almost forty years since it was released to critical fanfare and significant Oscar recognition, yet this pitch-black social commentary has grown in relevance rather than faded into a now irrelevant window on a bygone era. With a ferocious and devilishly brilliant script by Paddy Chayefsky, Network imbues the very same angry perspective and nihilistic preaching as its ostensible protagonist, a fully blooded assault on the loss of ethical responsibility within a medium which pumps information into the homes of billions of easily swayed people, with inspiration taken from the death of Christine Chubbuck and various other very real wrongs used to deliver a fittingly ironic and misanthropic indictment.

And yet, despite the heavy significance, this is a film that never falls into the hysterical weight of topic or ill-advised stabs at pathos. There is a darkly funny tone that runs beneath the surface of the action, an almost amoral joy at the story being told in contrast to the clear wrongfulness of the scenario presented. None of the characters on show, perhaps with the possible ironic exception of the mentally ill Howard Beale, act as the sane man to the sheer insanity of horribly realistic proceedings. Instead, the power plays at the top of UBS and its new parent company CCA are treated with a stark pragmatism that belies that money is the defining factor in any pursuit, and entertainment is more about exploitation than expression. We are left to watch on with growing horror at the escalation of depravity as no player in the plot tries to bring an end to the madness, even the ostensible ‘honorable man’ Schumacher emancipated by his life-wrecking lust for Diana Christensen and left weary where his old friend Beale is simply mad as hell.

As a piece of storytelling, Network is simply perfect in its execution.

The statements are bold and backed up by an incredible ensemble cast who deliver astonishingly good form in their well-defined performances. The biggest winner, of course, is the late Peter Finch as Beale, the Australian actor earning a posthumous Academy Award for his terrifyingly convincing turn as a man losing grip on reality as his growing instability is given a stage and an audience through which to flourish as an unhinged figure of a cult. His monologues decreeing the degrading morals of humanity are mesmerizing, delivered with such raw and pure emotion that it puts many stage greats to shame. But although the plot revolves around him, he is not even top-billed and acts as a catalyst to the actions of other characters equally crazed but in a much different manner. With a tired resignation, William Holden gives the film its subtlest performance as news division head Max Schumacher, who is as much on the scrap heap as his charge but without the advantage of having lost his mind. The role saw Holden vying with Finch for the Best Actor gong, one he would have bagged assuredly were it not for the competition.

Not suffering from being outclassed is Faye Dunaway, who’s deserved Best Actress win befitted a brilliantly complex and compelling performance as the troubled workhorse Christensen, an attractive young woman in a position of great power who has jettisoned any priority on personal happiness in favor of greater professional success. After Schumacher and Christensen finally part ways for the last time, Schumacher’s words damning her loss of humanity and emotional heart is as memorable for Dunaway’s impeccable reactions as it is for Holden’s inch-perfect delivery. Despite having a limited part and screen time against the bigger players, character actress Beatrice Straight also gets in on the act with one blistering scene as Schumacher’s wife, a brief interlude that bagged her Best Supporting Actress, while the Best Supporting Actor category role was taken by Ned Beatty thanks to his similarly brief, but equally amazing speech as company owner Arthur Jensen. Although he didn’t win, this intense and meaningful scene, in which Jensen berates Beale by delivering a monologue of equally unhinged conviction, is wonderful cinema.

To top it all of is the expert direction of Sidney Lumet, who manages to find several ways to breathe even more prosperous life into his flick, namely the use of increasing light and quality to the image as reality blurs with nightmarish, overexposed anarchy. Every iota of the story is handled right down to a tee with mature, knowing balance and an eye for sharp detail. A subplot involving Christensen attempting to secure the cooperation of a terrorist organization for a new sensationalist program is kept plugging away nicely with self-sufficient fascination and entertainment before revealing its true relevance at the stunning final sword stroke of a climax. The affair between Christensen and Schumacher is mostly used in the story for character insight but is framed as an essential part of the puzzle. From Beale to Jensen and down to the minor players, every character is given time to shine honestly without mugging. As a piece of storytelling, Network is simply perfect in its execution. That it conveys such a darkly honest and liberally acidic message and theme at the same time elevates it to the status of a masterpiece.