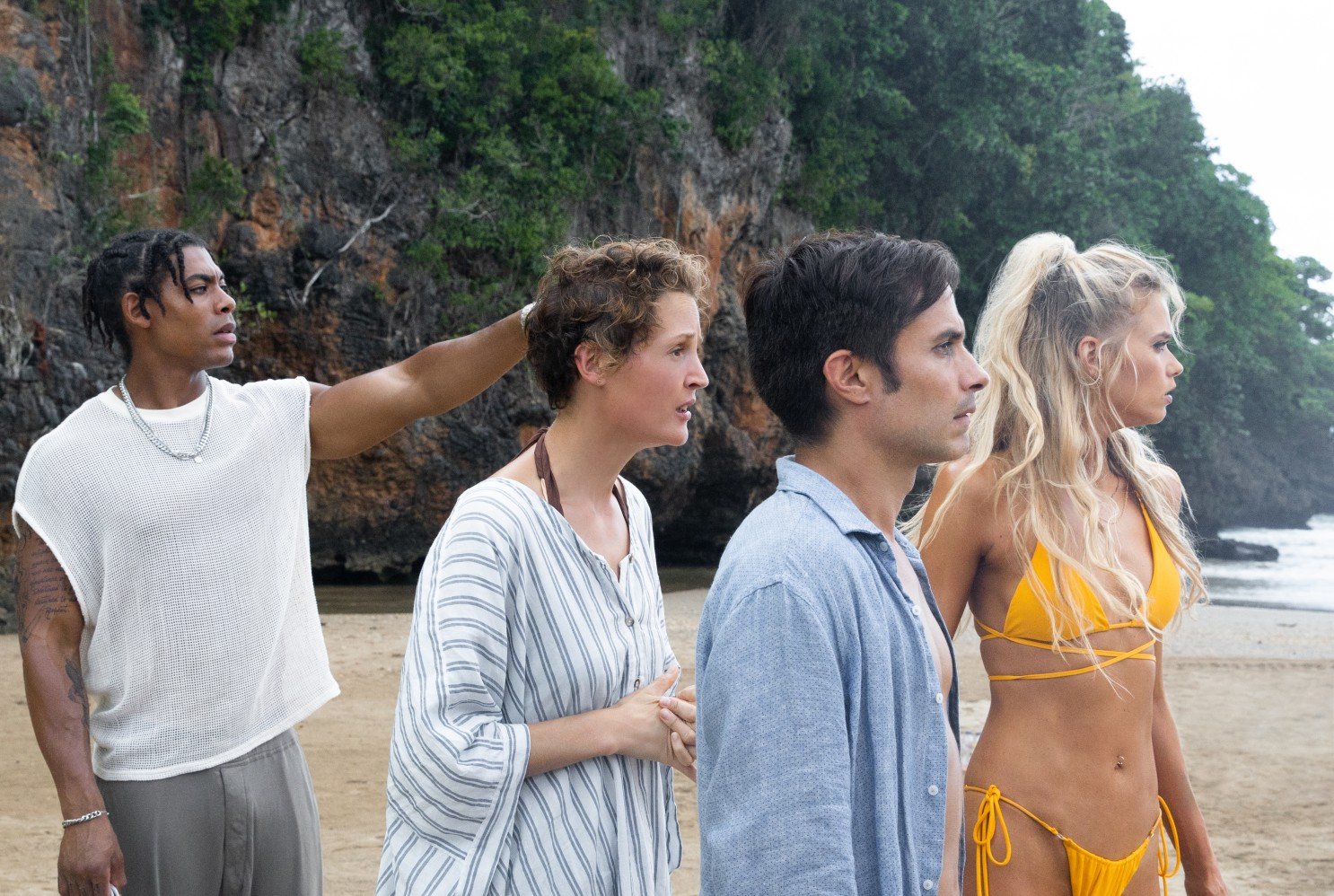 In typical M. Night Shyamalan fashion, nothing is as it seems in Old. From characters, all harboring secrets to the beach that looks inviting but is much more dangerous than it appears, Shyamalan’s latest film is often thrilling and occasionally contemplative enough to rise above its flaws – which is again another Shyamalan expectation. The director whose career rises and falls as often as the tide has rarely failed to realize the premise of his screenplays. With Old, the writer/director swings for the fences in a movie with so many dizzying directorial decisions and an ambitiously taut script that it’s undeniably hypnotic – especially in the film’s more absurd and ridiculous moments.

There’s a barrier that even the most forgiving audience member will have to immediately hurdle over in order to find a rhythm with Old. As Guy (Gael García Bernal) and Prisca (Vicky Krieps) arrive at their destination – a tropical resort – it seems almost too good to be true. “Can you believe I found this on the internet?” exclaims Prisca, who apparently has not heard of Expedia in 2021. In tow is their two kids, Trent (Nolan River) and Maddox (Alexa Swinton), who find their vacation slightly ruined by the looming threat of their parents potentially getting a divorce. They find a moment of peace when they are invited to go to a secluded area on the island, where a beautiful beach is hidden away from the regular guests.

By this point, it is apparent that Shyamalan is still very bad at writing dialogue. Trent runs around the resort collecting people’s names and occupations, characters find themselves often in situations where blunt questions and answers are all they seem to know how to speak, and not a single actor delivers these lines like a human being. It’s clearly intentional, much like 2008’s The Happening, which also tests viewers on whether they can stomach the entire runtime.

Once the film’s premise kicks in – the beach they have been brought to is actually aging them rapidly and there appears to be no way out – the movie sets a pace that dictates what kind of movie we’re getting. Despite its minute ruminations on the impact a brief moment in time can have on a lifetime,  Old is a mechanical movie. It wants to explore every possible wrinkle that its premise could provide, and it wants it all to coalesce into a tight package that feels exciting to have experienced. Like a car, every part matters, but Old always feels like it has a loose part somewhere that it knows exists and just doesn’t want to fix.

In this case, the part is the characters and dialogue. At its best, Old will make you laugh. Sometimes it’s intentional (a character losing their mind constantly asking what film two actors are in despite the situation around them, is just great stuff), but other times it’s for the same reasons The Happening did: nothing is believable because the situation makes characters feel like they’ve only just stepped onto planet Earth. Yet, once the film’s late-game twist happens, Shyamalan has effectively reframed the entire way to approach the film. It’s the moment that makes the tight thriller loosen up, even as it’s diving deeper into exposition to try to keep everything compact.

It mostly works because the film hardly seems to know any other mode beyond exposition. Every character exists for a reason, every interaction expands the audience’s knowledge of what’s happening, and the film’s tight pace makes it so the mystery is all that matters. There’s a good stretch of Shyamalan’s career where his films just didn’t drag – they were always doing something and operating in service of the plot, as opposed to the characters. It’s why he never seemed to figure out dialogue, because his narrative and subsequent twists tended to take precedent, often dictating what information people gave as opposed to how they are feeling in a given situation. Old is no exception to this.

What works in Shyamalan’s favor is that he has a great cast who excel with the material provided. Yes, every character speaks like an alien, but actors like Alex Wolff and Thomasin McKenzie effectively lead the film and handle what are ostensibly silly characters in a horrifying situation. Meanwhile, Krieps and García Bernal bear the weight of the more contemplative moments in a movie that only seems passively interested in diving into that material. Regardless, their one beautiful moment is touching and it would not have been without the consistency in the performance wrestling with stilted dialogue. As for some of the other performances, they’re all enjoyable but intentionally more chaotic and engaging, offering up those slices of cheese that make Shyamalan’s movies entertaining.

There’s also the incredible camera work and cinematography from Mike Gioulakis (who shot recent genre hits like Us, Under the Silver Lake, and It Follows, as well as Shyamalan’s Split and Glass). If the screenplay itself didn’t carry the pace with its own momentum, Gioulakis, and Shyamalan frame and block each scene in such an articulate, captivating way that the movie maintains an excitement visually that keeps on giving. With a film set on a beach with no way to escape, and characters forced to confront time in such a direct way, Gioulakis imbues the film with a constant feeling of being trapped. Shots are tight, or they remain fixed on characters even as they try to escape the scene.

The tight framing and constant claustrophobia also lend to the movie’s more horrifying moments. There’s a specific moment of body horror that ranks among one of the best pieces of horror content in Shyamalan’s filmography. The special effects for that scene are unreal, in a movie that is already flexing by aging characters believably across decades in such a short timespan. Some of it is more incremental than others, but others are haunting in how eerily accurate they feel.

Old is a difficult ask if you’re not already on board with M. Night Shyamalan as a director. It’s not unlike his previous films, but it’s also far more ambitious than any single film of his has been. It also never asks you to believe its premise, but it does fall into the trap of needing to explain it, which again is a common pitfall that often takes the wind out of his other films’ sails. However, Old is never not fun. Even in its dumps of exposition, there’s a gleeful feeling of someone behind the camera smiling as it all starts piecing itself together. It works only because the audience is also working in tandem with the film, recontextualizing what they’ve seen before as the movie continues to deliver insight into its machinations. While far from a masterpiece, Old is an entertaining thought exercise from one of Hollywood’s most invigorating filmmakers.