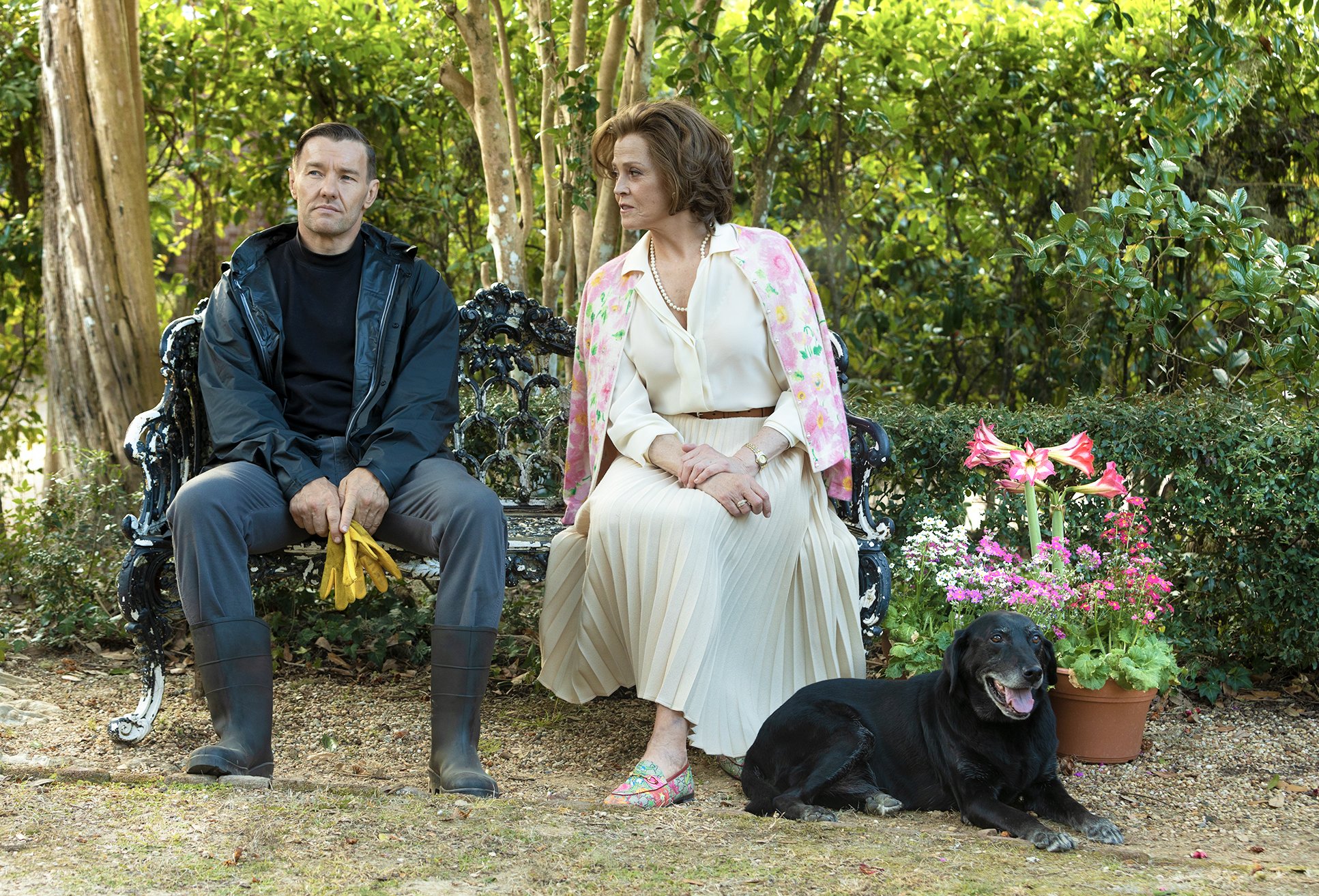 The opening shot of Master Gardener wastes no time identifying itself as another installment in Paul Schrader’s late-career phase of stories about lonely white men who write journal entries in the dark at modest desks and need to find redemption through angelic female figures. You see Narvel Roth (Joel Edgerton) sitting at a modest desk writing in his journal about the gardens to which he has dedicated the later years of his life. Also, he’s lonely and seeks redemption but I’ll get to that. Be sure to mark off your Schrader bingo cards as we go along.

Schrader’s latest is the third such instance that adheres to this structure following two outstanding films: First Reformed and The Card Counter. Though the formulaic nature of these films may seem like an artistic crutch, he’s been able to consistently find new ways to combine earthly occupations with some of the greatest sins of humanity: an unassuming priest and pollution, a professional gambler, and America’s war crimes, and now a gardener and white supremacy. Each installment finds its own way to grip, disturb, and imbue its audience with the guilt of its haunted protagonist. In Master Gardener, Schrader tweaks his formula ever so slightly while still delivering another captivating indictment of the ills of society.

Narvel spends his days and nights at Gracewood Gardens, a thriving botanical garden owned by the well-heeled Norma Haverhill (Sigourney Weaver). He is knowledgeable, meticulous, and philosophical about the various flora and fauna he is in charge of cultivating; conveying Joe Pera levels of detail to his journal and staff. Wanting to appear benevolent without putting in much of her own effort, Norma informs Narvel he will be employing and training her troubled grandniece Maya (Quintessa Swindell), whom she coarsely refers to as “mixed-blood.” Norma would like for Maya to find new roots the way Narvel has.

Narvel’s preoccupation with gardening provides a distraction from the unsettling memories that strike him in the middle of the night. His fastidious approach to gardening extends to his lifestyle. Narvel’s hair and manner of speaking are as manicured as the hedges that line Gracewood’s paths; a life of boundaries and rails. Through short-burst flashbacks, you get glimpses into Narvel’s dark past, one he’s worked tirelessly to bury deep beneath the topsoil of his new life. “Gardening is a belief in the future,” he says, “change will come in its due time.” This is Schrader’s metaphor for growth and rebirth. The restorative effects of gardening work their magic on Maya, just as they have on Narvel. But Maya’s relationship to the vices in her life, namely her drug-dealing boyfriend and his clique, clash with the clean and narrow road Narvel has made for himself and is now leading Maya.

Though this film remains beneath the gloomy sky that has carried over from First Reformed, the bucolic splendor of Gracewood Gardens provides a welcome dose of mana from the bleakness of Schrader’s recent interests. You can feel the serenity afforded by the gentile palette of flowers. Narvel instructs Maya and his staff to grab the soil, squeeze it between their fingers, and bury their nose into the dark, rich dirt. It’s a silly and simple gesture but also a pure expression of the passion and reverence Narvel has fostered for nature.

Narvel’s relationship with Maya begins as a mandate but blossoms into atonement for past sins. Maya is Schrader’s most recent angelic female that will bring salvation to his guilt-stricken lead. While Schrader sizes up contemporary issues with his recent work, they are also old-fashioned Hollywood stories. The troubled men of mid-century noirs find their path to righteousness in the damsel representations of traditional female roles of nurturing and forgiveness. Schrader’s language reflects this. “Something’s missing in her. Something vital fell out. Something took its place,” Narvel says of Maya though you could easily imagine Humphrey Bogart crooning this about a romantic co-star. His recent leading men handle the dirty work, and the woman is there to clean him up. This cleansing is yet another square on the Bingo card, always reflected in a surreal sequence complete with fantastical visuals to telegraph the transcendent experience.

One consistent story beat that Schrader doesn’t quite nail is the “explosive comeuppance of the antagonist.” This trope has brought us such intense moments as Ethan Hawke buttoning up an explosive vest in the mirror and Oscar Isaac recreating Abu Ghraib for Willem Defoe. The problem is that Narvel is not facing off against some representative element of his guilty past. He confronts some petty vandal drug dealers who pose little threat. The absence of this danger makes for a rather flat payoff.

Though that intensity may be diluted compared to his last two efforts, Master Gardener is nonetheless a solid representation of recent Schrader. The man is only 76 years old but every few months we are forced to anticipate a God and pray for his survival. He’s clearly hit on a formula that works for him and for us. The sad effectiveness of this formula lies in the fact that there are innumerable instances of sadistic transgressions perpetrated by humankind for Schrader to make us feel guilty about. And until we as a species learn to care for and respect one another and atone for the sins of our past, we can only hope to relish in the bittersweet late work of a cinematic giant as long as we can.