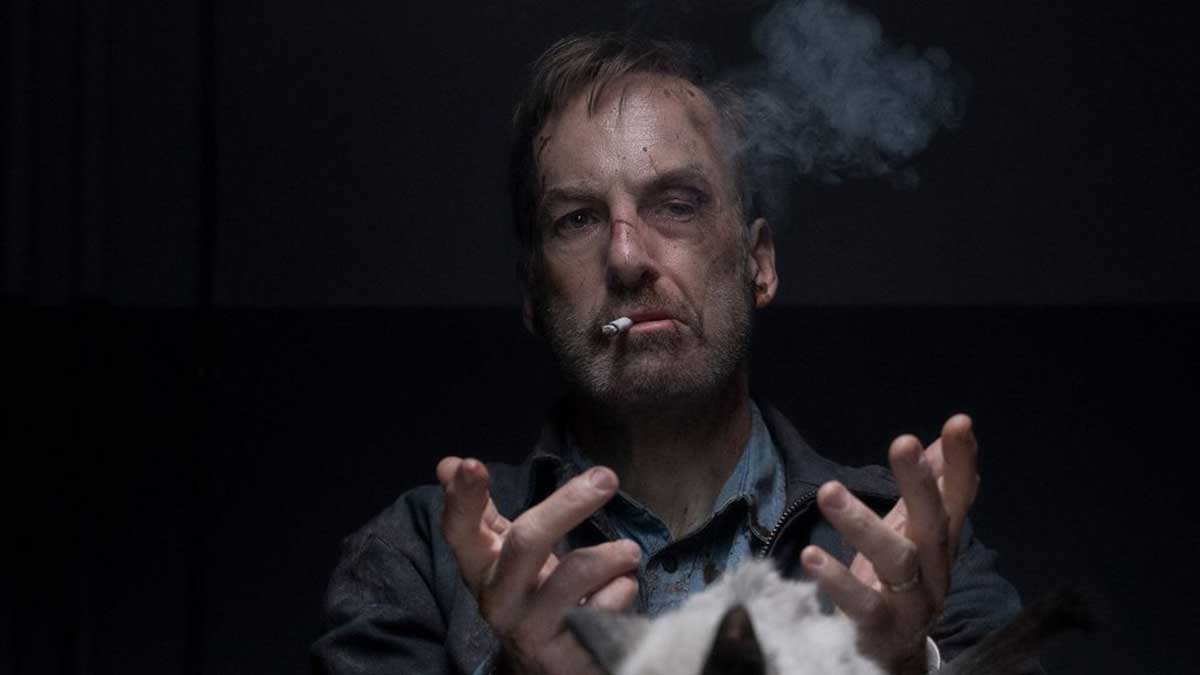 When reedy Bob Odenkirk is cast as a bone-breaking, face-pummeling, crack-shot army of one, it may seem like the giggling corners of the action genre that revel in John Wick and produce countless Liam Neeson movies have jumped the shark. And yet, Nobody manages some distinction amongst the bullet casings and spilled blood by finding a middle ground between the grit and the goofy of those inspirations; this is a scaled-down, grinning romp of a beat-em-up, and the lack of bloat is part of the charm. Lacking all the cinematic excess, Nobody confidently zips along, its irrelevant plot holes aided by a wry sense of humor and a totally committed physical performance from its disheveled star. Forget Saul; if you’re in trouble, better call Hutch.

Yes, the main character of a movie called Nobody is named Hutch Mansell, which sounds suspiciously badass enough to undermine the portrayal of anonymous impotence in a middle-aged family man living out the routine of his forgettable life day by day. Or does it? Regardless, the film opens with a brief summary of everyday monotony, like forgetting garbage day and splitting a pot of coffee, while adding a bit of marital distancing for good measure (the tired-looking couple is walled off from each other, both emotionally and by an actual pillow barrier in their bed). However, brief moments with a pixie daughter also let us know this sad sack is really a good guy deep down. Maybe he just needs to rediscover his youthful lust for life.

After a botched attempt at foiling a late-night home invasion, Hutch’s son and bro-in-law begin to question his ability to protect his family (how hard is it to bash a burglar in the back with a golf club?), as well as his manhood. Thus, Hutch sets out to regain some control over his life, win back that lost respect, and scratch an itch that has been eating him for years. How? By busting lowlife skulls, of course — what could be more therapeutic? Naturally, Hutch stomps and stabs the wrong hooligans during a random bus encounter, angering a weary Russian crime boss who would rather be adored as a night club performer than have to deal with pesky underworld mafioso-types. One of those thugs was his ne’er-do-well brother, and so retaliation ensues, followed by escalation, followed by character revelations, followed by more escalation, and well, you get the point. Everyone is bringing a gun to a knife fight, and things get a tad out of control. It turns out there’s more to Hutch than meets the eye, and this mild-mannered schlub can hold his own and then some.

Aside from some admittedly satisfying discoveries made about Hutch’s mettle, however, there’s not too much to the plot here — thankfully — and Nobody is slyly aware of this, even having some fun with certain conventions (a clever running gag sees Hutch’s battered victim’s opting to permanently check out every time he tries to deliver exposition). Extraneous characters (i.e., everyone that is not Hutch or the Russian baddie) are quickly glossed over, maybe given a quirk or two that the writers can mine a quick gag from. They are not missed; the few times the film slows down to actually try to establish some pathos are its dullest. Really, Nobody is all about Hutch, and Hutch is all about violent havoc.

Violent havoc is not what one has come to expect from star Bob Odenkirk, but the success of Nobody rests squarely on his shoulders, and he does not disappoint. Yes, it’s a little strange at first to see the guy from Mr. Show brutishly snapping necks and tossing homemade explosives, but Odenkirk clearly trained hard for the role and is never less than believable in his punishing power or ability to recover from being thrown through a bus window. Whatever Hollywood is giving these fifty-year-olds, I want some. The fights take place in more confined spaces and don’t contain the outrageous and dazzling balletic choreography of recent action flicks, but there’s more primal energy at play that winds up working well for the story.

The increase in physicality hasn’t diminished Odenkirk’s adeptness at quirky humor, however, and when throats aren’t being cut, he’s able to playfully wink at the genre he’s trying so hard to punch into. Nobody is aware of how ridiculous it is for one man to take on dozens and does a nice job of both taking the filmmaking seriously and poking fun at the premise — not with snark, but with love. The whole thing can at times seem like a mix of John Wick and the Taken franchise, with a dash of Home Alone crossed with Rambo, but don’t worry; Nobody doesn’t come off as weird as it sounds and stays shallow enough that why things are happening is never as interesting as what is happening.

And what is happening is small-time action movie fun. Crisp, clever, and anchored by a dominating performance from the last person many would expect, Nobody is a nice little surprise that breaks more bones than new ground. However, the smaller scale and focus on execution(s) make for a refreshingly streamlined entry in the genre. Nobody isn’t trying to be somebody — it has simple, aspirations to turn Bob Odenkirk into a savage killing machine, and it entertainingly succeeds in reaching this modest goal. Sometimes that’s just what audiences are looking for.