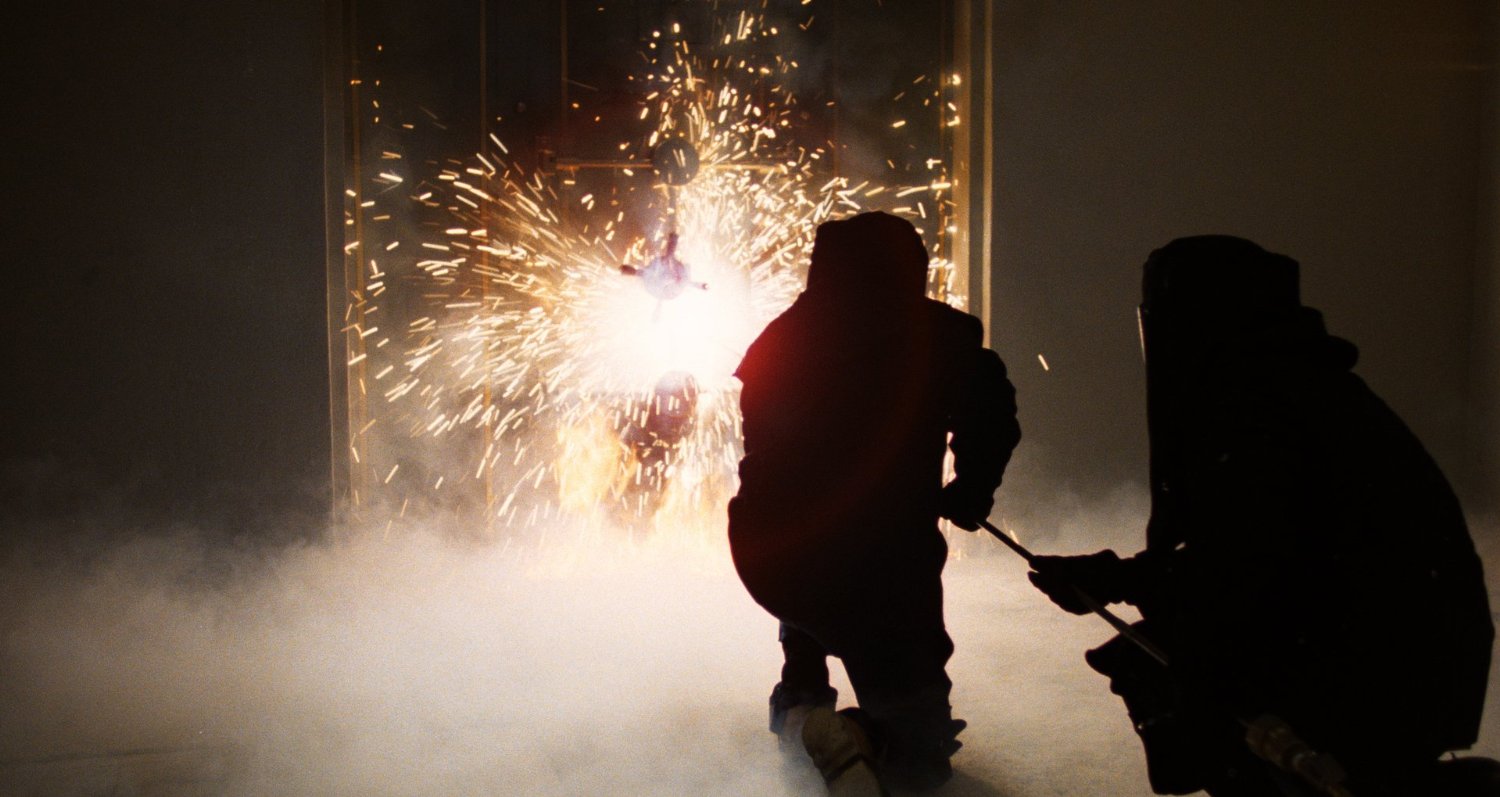 1981 saw the release of Michael Mann’s feature directorial debut Thief. James Caan plays Frank, a professional safecracker whose plan to settle down spirals out of control when he becomes indebted to an underworld criminal organization. Thief is a gritty modern film noir that bubbles with Mann’s stylish, atmospheric direction. For a first feature, Thief is simply put, a masterpiece. Through Mann’s unique and effective story-telling approach, and Caan’s world-class performance, Thief ranks alongside the very best caper flicks.

Frank’s mentor Okla (Willie Nelson) is sitting behind bars desperately trying to get out and Frank’s latest job goes bust when his business partner decides to walk off the ledge of a sky rise. Frank has also spent quite a bit of time in jail but with a new relationship blooming with waitress Jessie (Tuesday Weld), he’s looking to settle down. Coming to the rescue is Kingpin Leo who requests Frank’s services and in exchange offers himself as a business partner and a fatherly figure. Leo treats Frank like a son and eventually presents him with one final caper, a $4 million diamond heist that can send Frank into retirement. Frank decides to seize the opportunity, claiming an investment in the job with a large haul guaranteed. But Frank sees himself as a freelancer, a self-employed crook who only works closely with his able right-hand man Barry (James Belushi). The problem is, Frank doesn’t know how to play well with others, or rather he prefers to work on his own terms. Complications ensue ending in a series of double-crosses and a flood of bullets.

At a time when thrillers have been cheapened by the same routine and clichés, Thief aims to make its gruff but appealing ex-con Frank, its prime focus. This isn’t your average one-final-hit caper-flick. Thief is so much more – a movie that understands its subject, and understands the criminal personalities better than most. And there is a reason for this. The film is based on the novel The Home Invaders, written by Frank Hohimer, himself a professional cat burglar, and real-life jewel thief John Santucci was hired as a technical consultant. Even more, the big jewel heist in this film is based on an actual caper masterminded by Santucci himself. One of the movie’s most exciting scenes is the complicated robbery of $4 million from a Los Angeles jewelry company. Assisted by Barry’s knowledge of electronics and a giant thermal lance, Frank moves closer to the American dream. But the heists as thrilling as they are is only half the reason to see Thief.

As with most Michael Mann films, Thief centers on the expertise and skill of the lead character. Caan, in a role equal to his Sonny Corleone, is an existential hero who lives dangerously on the edge; testing his professional independence to the limits. Caan is wholly convincing as the titular character. He’s sluggish, and Caan speaks purposefully slow to avoid of any contractions. Frank is a man who is trying to make up for lost time, and his way of speaking, methodically, and clear ensures he never has to repeat himself.  Frank desperately or wisely masks his lack of education. He’s a working man, who dreams of a future meticulously mapped out as a collage on a homemade postcard. He’s confident, imposing, and, at the drop of a dime, self-destructive and lethal. He’s unpredictable yet predictable. As long things go Frank’s way, Frank won’t get in your way, otherwise, watch out. Frank is more childlike than adult one moment a hot-headed thug – the next, a respected criminal. It’s a brilliantly nuanced performance from Caan, who carries the weight of the film on both shoulders. On the surface, Thief appears to be a simple crime thriller, but the chief conflict in Thief isn’t between Frank and Leo, but rather how Frank becomes his own worst enemy. James Caan demonstrates Frank’s insecurities, self-delusion, and fear of failing in a pitch-perfect performance. Frank wants so badly to be someone else and in his mind, he believes he actually is.

James Caan has gone on record to say that Thief is his favourite film (of his own), just after The Godfather, but further stated that his monologue in the diner is the performance he is most proud of. Indeed he should be. Tuesday Weld is also really good in a difficult part as Jessie, and the duo shares an electrifying scene where Frank explains his life to her. “I wear $150 slacks, I wear silk shirts, I wear $800 suits, I wear a gold watch, I wear a perfect, D-flawless three-carat ring, Frank says, “I change cars like other guys change their fucking shoes. I’m a thief.” As Frank lays his past and fears on a diner table, his Zen view of life is revealed in a makeshift postcard. “That is my life, and nobody – nothing can stop me from making it happen.” Dialogue just doesn’t get any better than this and the acting is top-notch. Mann further manipulates the scene via sound effects, most notably with traffic sounds which were used to give the scene a sense of build.

The supporting cast is filled with terrific performances. They include James Belushi, Dennis Farina, William Petersen, John Kapelos, and Robert Prosky making their film debuts. In an emotional scene, Frank visits Okla (Willie Nelson), a master thief who taught him everything he knows. Okla doesn’t expect to live much longer due to his heart condition and begs Frank to find a way to get him out of jail. “I don’t want to die behind bars,” he tells Franks, “I can’t wait that long.”

Michael Mann is arguably the premiere filmmaker of contemporary American crime stories challenging viewers with every passing image. With Thief, Mann was honing his trademark style. Unlike most mainstream American filmmakers, Mann avoids tireless expository dialogue and trusts that his audience is smart enough to figure things out themselves. Mann effortlessly introduces Frank’s ability as an expert safecracker right from the start, and as the film progresses, Frank’s professional success is juxtaposed with the other less accomplished aspects of his life. Mann gives the impression that Frank is like a rat endlessly running through a maze. Metallic colours were utilized to make the city streets seem more like tunnels and the film move at a taut pace, creating tension and anxiety aided by Don Thorin’s cinematography which makes the most of the Chicago backdrop. Technically the film is stunning, as is the case with every Mann film. Thorin’s photography passionately captures the dreamy nighttime neon-lit streets of Chicago and is aided by a 60,000-gallon water truck that was used to keep the streets constantly wet and the light reflecting from every corner of the frame. It’s no secret Thief influenced Nicolas Winding Refn’s Drive, not only in its look but also in its soundtrack. Mann’s films usually contain fast-paced, artful scenes that strongly depend on the music. The pulsating synth score from Tangerine Dream propels the film with its strange and otherworldly sounds. Thief is an impressionist film, depicting Chicago as a landscape of emotions and moods, and the slick camera work, moody musical score, and the nighttime city visuals, help elevate Thief above the standard heist flick.

Worth noting: This is the only film shot by Michael Mann to be presented in a 1.85:1 standard widescreen ratio. After this film, he has shot all of his movies in 2.35:1 anamorphic widescreen ratio.

There’s some debate about what happens to Frank after he walks into the final scene. In my eyes, this is intended to be a tragic ending. Frank might walk away unharmed but given his history, Frank chooses to rid himself of everything he cares about because he’s afraid of failure. Now that he has everything he wants in life, his nihilistic behaviour rejects a happy ending. Although working on several television projects prior, most notably The Jericho Mile, Thief allowed Michael Mann to unleash his full creative side. Thief wasn’t made for a paycheck – it is a piece of art evident from the lengthy, dialogue-free opening right up to the closing shot.

Everyone Talks About Taking Action But Nobody Does It