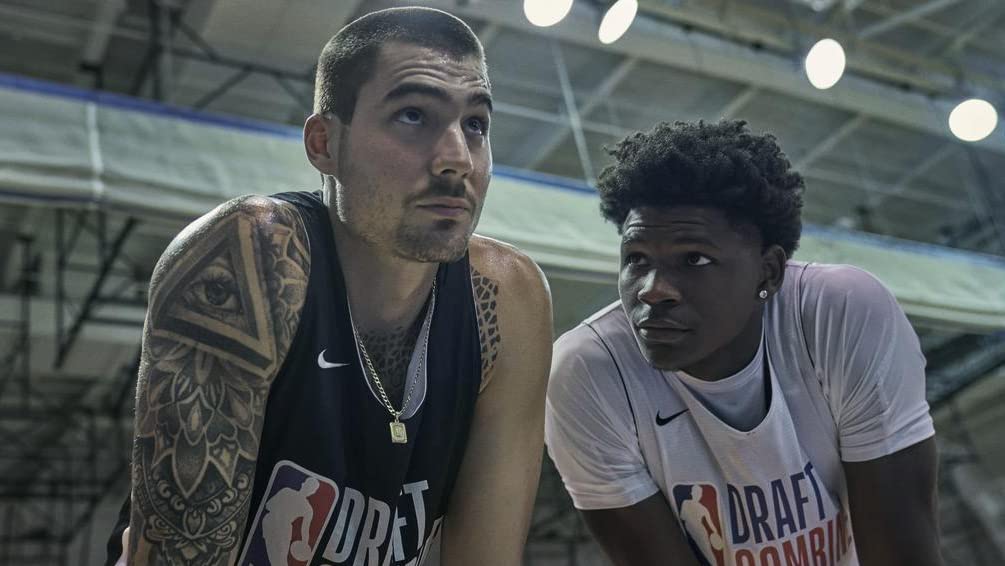 The quality of Adam Sandler’s cinematic output has been turbulent, to say the least. Under the banner of his production company, Happy Madison, he has released some of the worst comedies of this modern era in Grown Ups, Jack and Jill, and That’s My Boy. Yet, he has never failed to showcase his prowess as a performer- take the loveable Barry Egan of Punch Drunk Love and the delirious dynamism of Howard Ratner in Uncut Gems. His most memorable and tactful performances are tied together by one unassailable fact- he maintained no creative control over the films they appeared in. Netflix gave free rein to Sandler in a landmark $250 million deal and its subsequent output has become a clear lesson in the unmitigated dangers of full creative control.

Yet, Hustle marks the rare Happy Madison production that is both competent in its direction and genuine in its emotional trajectory. In the vein of Uncut Gems, Hustle is another great film that centers around basketball, continuing Sandler’s successful relationship with the sport as he brings forward an endearing and nuanced performance that brightens a heartfelt tribute to the game and the spirit of perseverance.

Sandler stars as Stanley Sugarman, a worn-out scout for the Philadelphia 76ers whose daily grind of intercontinental travel finally bears fruit when he’s promoted to assistant coach by Rex Merrick (Robert Duvall), the club’s aging owner. That same evening, Rex suddenly passes away, leaving his arrogant son, Vince (Ben Foster), in charge. Three months later, Stanley is forced back into his arduous position as a scout, leaving him embittered about his lot in life, despite having the support of a loving family.

On a seemingly uneventful visit to Spain, Stanley comes across a local pick-up game where he is stunned by an incredible unknown talent, Bo Cruz (Juancho Hernangómez). After convincing Cruz to travel to the United States for a try-out with the 76ers, a familiar sports fable rife with personal triumphs and even greater obstacles ensues. While all the trappings of a formulaic and crowd-pleasing sports drama are embedded into this narrative, Hustle rides the fine line separating earned emotion and oversentimentality incredibly well. Rarely veering off towards the easier and more saccharine path. The film possesses an unexpected amount of restraint, and it is the driving force that makes it one of the better sports movies in recent memory.

Director Jeremiah Zagar never over-stylizes and impedes the forward momentum of the narrative, employing serviceable shots that complement the traditional, “everyman” charm of the film. Hustle doesn’t have any elaborate moves, but its earnest portrayal of athletic and personal achievements doesn’t need them. Zagar’s ability to embrace this mentality allows for a satisfying traversal of conventional plot points. Yet, this isn’t to say the film is deprived of style as it boasts a memorable and effective montage sequence that earns its place in the film, rather than simply being an item on the sports drama checklist.

Hustle also features a capable performance from NBA star Juancho Hernangómez, whose inexperience as an actor bolsters the heightened realism of the climatic basketball scenes. In addition to Hernangómez, the film features a plethora of NBA cameos from the likes of Tobias Harris, Anthony Edwards, and Doc Rivers that all provide a raw edge to the story that many sports films dream of replicating. This marriage of actors and athletes results in an absorbing portrayal of the sports industry that retains its palpability both off and on the court.

While it’s no masterpiece, Hustle is an assured return to form for the sports drama, as it repeatedly lands the emotional blows it sets up. Sandler might have dragged the American comedy to an all-time low, but his newest offering surprisingly casts the sports movie back to its lofty heights.

Thought-Provoking Subject is a Documentary About Documentaries