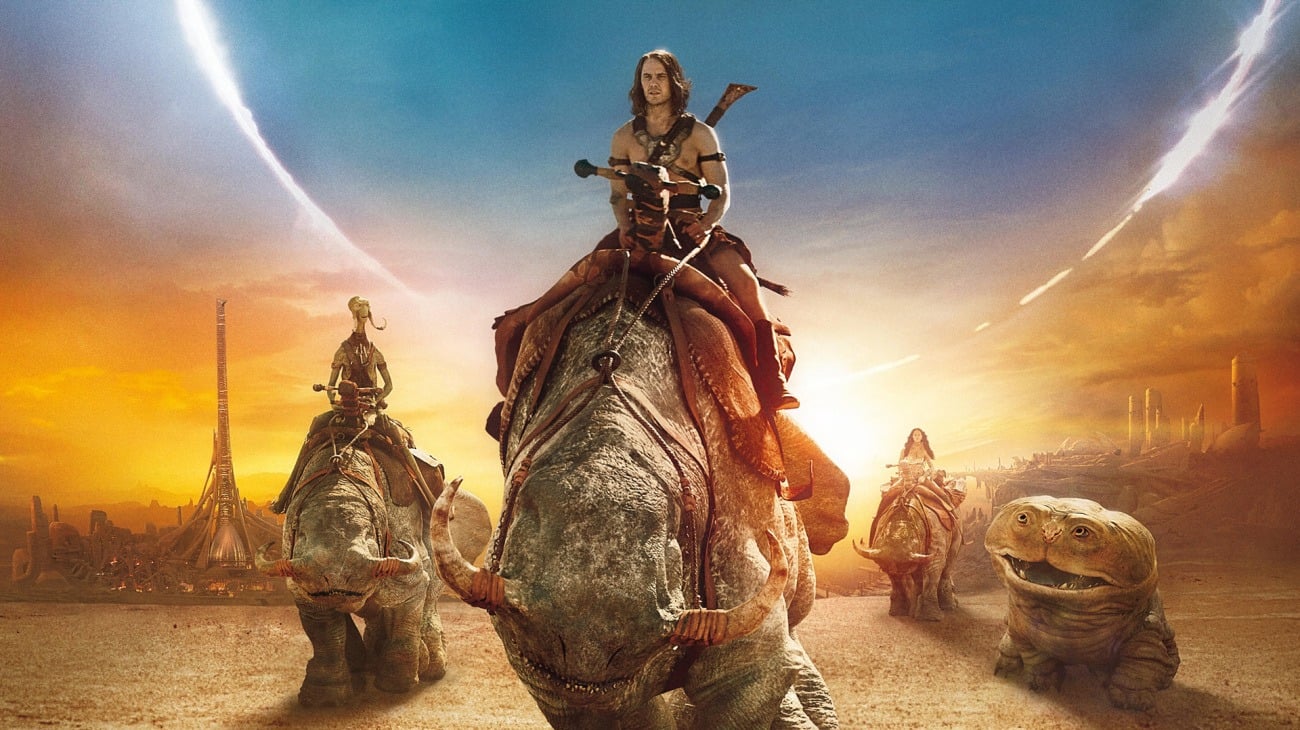 Lost in Our World. Found in Another.

The one thing that John Carter does better than anything else, is understanding who John Carter (Taylor Kitsch) is, what his journey needs to be, and how to properly illustrate that journey.

The start of John Carter’s journey (as told to Edgar Rice Burroughs through Carter’s diaries) finds him in the Arizona territory on a quixotic and near-suicidal quest for a treasure that may not even exist. It seems like Carter, perhaps unhinged by his personal losses, has devoted his life to an all or nothing pursuit: either Carter finds enough gold to achieve the best kind of revenge (living well) or he will die trying.

A veteran of the Confederacy, Carter has seen his personal and professional world destroyed. His nation, the Confederacy has been destroyed by war and Carter’s wife and child killed. In the same way that Arlington National Cemetery was built on the confiscated family property of the wife of Robert E. Lee, Carter’s home is now a graveyard. This destruction has simultaneously soured Carter on war in general and made him dangerously sympathetic to the cause of the underdog.

Despite clinging to the ideals of the romantic South, Carter’s losses and his empathy for the underdog have made him a post-slavery Southerner. He treats everyone as equals whether they are Red Indians (Apache), Red Martians, or Green Martians (Tharks). The only races that earn Carter’s scorn are the white ones: the White Martians (Therns) for acting like slave-owners and the White Apes for acting like monsters.

It makes perfect sense that Carter should find himself in a desert, the lifeless desolation echoing what lies in his heart. The Arizona territory or Apache territory is another world on the verge of death – it is no surprise that Carter is sympathetic to the doomed Apache cause or that he is able to demonstrate his linguistic skills by speaking with the Apache. At the same time, Carter’s refusal to join another war on either side leads to him doing paradoxical things like rescuing Colonel Powell from the Apache.

When Carter finds himself transported from Arizona to Mars, at first his only clue that he is no longer in Arizona is his ability to jump in the lower gravity. Like Arizona, Mars is a desert. It is also a dying world, filled with natives (Tharks) barely clinging to survival. Early on, Carter finds a nest of young Tharks whose struggle to break free of their eggs and flee to safety resembles the race to the survival of turtle hatchlings.

Captured by the Tharks, Carter is essentially turned into a Thark hatchling and given into the care of secret Princess of Mars Sola (Samantha Morton) who teaches Carter how to speak the language of Barssom with the help of a magic liquid used to accelerate the teaching of Thark hatchlings.

Carter quickly blunders into the middle of a thousand-year war rescuing Helium Princess of Mars Dejah Thoris (Lynn Collins) from the forces of the walking city Zodango and their leader Sab Than (Dominic West).

While on a quest to figure out how he came to Barsoom from Earth with the two Princesses of Mars and his new pet “dog” Woola, John Carter chooses to sacrifice himself to save the two Princesses and attacks a huge group of enemy Tharks. This is the most Frank Frazetta moment of the entire film. Frazetta, the legendary fantasy artist, worked directly with Edgar Rice Burroughs on covers for the John Carter books. One of the criticisms of the film is that it could have taken more inspiration from Frazetta. That’s not entirely fair. The film is visually gorgeous and saving this “Frazetta moment” helps give the sequence a real emotional impact.

What drives the sequence is the sense that Carter has finally found the good death that he has been looking for, sacrificing himself to save two lives to make up for his failure to stop the death of his wife and son. And in sense, the sequence is both a burial and a death, the death and burial of John Carter of Virginia.

Carter’s spiritual rebirth comes much later in the film’s other bravura action sequence when Carter fights the two blind White Apes. It is prefaced by a speech from deposed Thark King (“Jeddak”) Tars Tarkas, Sola’s father and the Thark who initially captured Carter, “When I saw you, I believed it was a sign… that something new can come into this world.”

It is not a huge leap to understand that in fighting the blind White Apes, Carter is fighting himself, fighting the incoherent rage that has blinded him since the death of his wife and child. The film confirms this when Carter literally kills the second Ape from the inside out – emerging drenched in the blue blood of the ape, becoming something new on Barsoom: the first and only Blue Martian. Part of what makes this sequence work is the muted palette that Andrew Stanton has used in the film, causing the blue blood to practically explode on the screen.

At the risk of being ridiculous, the sequence predicts Carter’s later wedding to Dejah Thoris. Carter is simultaneously something old (a kilt-wearing blue-painted Pict), something new (a Blue Martian), something borrowed (a human stolen from Earth), and something… well… Blue!

Spiritually reborn, John Carter is finally able to become what he was always supposed to be, a war leader, leading the Tharks to save Helium and fight off the Zodango forces, rescuing Dejah Thoris from being forced to marry Sab Than.

There are many things that John Carter fails to do, (and plenty of places where you can read about its failings) but all of its shortcomings are direct results of a great director trying to make a great film. Its successes spring from a keen understanding of John Carter’s character and the journey that turns John Carter of Virginia into John Carter of Mars.

Michel Gondry’s The Green Hornet at 10