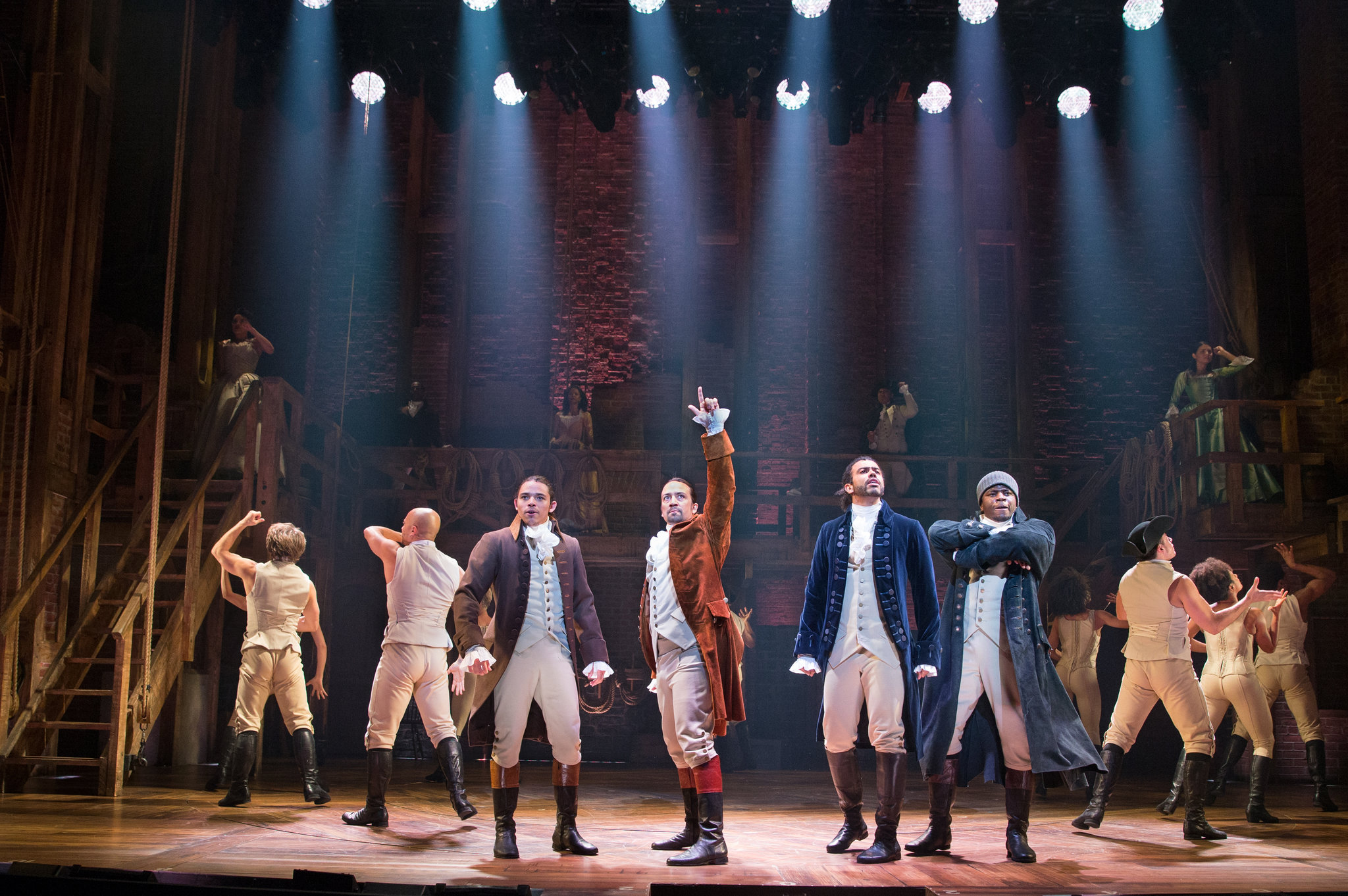 Hamilton is the kind of smash hit that only comes to a genre of entertainment like musical theater once in a decade. Even those who don’t follow Broadway, or care much for musicals, will be well aware of its existence, and that’s no accident. The brainchild of writer-performer-musician Lin-Manuel Miranda, Hamilton is the kind of firing-on-all-cylinders performances that will leave an impression on even the most jaded of viewers, a feat which is especially impressive when you consider its inspiration.

While the raw material of the show is the American Revolution and the first years of the United States of America, there is so much more to the show than that. From real-life love stories to scandals in the press, to bitter lifetime rivalries that eventually boil over into bloodshed, the history behind Hamilton is rich, and it is mined here for all it’s worth and more.

Based on, and inspired by, Ron Chernow’s biography Alexander Hamilton, Miranda’s musical was born when he read the book while on vacation. Soon he had written a rap about Hamilton, which he performed at the White House the following year. From there the show developed organically in his mind, with

new songs coming to him one by one, transforming the idea into a rap concept album and, finally, into the musical we know today as Hamilton.

It’s since gone on to become the kind of hot commodity where even those in the highest tax brackets might struggle to get tickets for a show. Famously the Hamilton Lottery was created for just this reason, allowing regular folks the chance at seeing the insanely popular musical. Now, though, one needn’t remortgage their house or play a game of odds in order to see the biggest musical on the planet.

Disney+ has finally released the filmed version of Hamilton, after acquiring the rights to the musical earlier this year. Filmed with the original Broadway cast in 2016, this is essentially the only way for anyone who didn’t catch the show in its first run to see it as it was originally conceived, cast and performed. And rest assured, it is well worth seeing.

A tour-de-force in every sense of the word, there’s a reason that Hamilton set the world on fire before it was even complete. The lyrics are loaded with the double entendres and hidden meanings that the best rappers have been penning for as long as the genre has been around, and you’ll be shocked to find how much you learn about history by simply watching, or even listening to, it.

Painstakingly researched, Miranda’s lyrics are so adept that even seemingly throwaway lines like “Look at those eyes!” and “I noticed a comma in the middle of a phrase” are the result of historical record. With this in mind, the pure entertainment value of Hamilton becomes even more impressive. One can virtually see the eyes of history teachers everywhere lighting up with the chance to use incredible rap, soul and pop songs as teaching tools for their students. What better way to trick a kid into learning a subject they might otherwise sluff off?

To be sure, the music of Hamilton is its greatest strength. Now, this might seem like an obvious statement when discussing musicals, but the point is belabored further with a show like Hamilton, which features almost no spoken dialogue. Instead, the show ratchets from one high caliber musical number to another with scarcely a beat or interlude between them. A mere 10 seconds of flowing rhythm is all it takes for the cast and crew to transform the stage between songs, and even that only occurs on occasion.

There is not enough praise in the world to heap upon the diverse genre selections on display here or the staggering level of their quality. From classical ballads and traditional Broadway-style numbers to some of the best rap, R&B, soul, and hip-hop of the 2010s, Hamilton‘s massive 40+ tracklisting is a feast for your ears and can be enjoyed on that front alone, as the numbers will clearly show.

However, the added dimension of the visual element, an element that many fans are finally experiencing for the first time after years of imagining it, adds a ton of context to the already densely loaded material. Further, actually seeing the cast in their double roles (many of the actors change into different characters at the show’s midway point) offers a lot more clarity to the show as a whole.

Of course, the performances themselves have to be praised as well. For the size of its cast, Hamilton doesn’t have even a single weak link. Phillipa Soo, whose lithe frame bemoans a staggering vocal talent, Daveed Diggs, a performer with the charisma to knockout two incredibly disparate characters in a single show, and, of course, Miranda himself, who does much of the dramatic heavy-lifting of the show, all make their mark. Other standouts include Leslie Odom Jr. as the complex villain of the piece and Renee Elise Goldsberry as the brilliant Angelica Schuyler.

There is also a strong emotional core to a show that has so much to do with diplomacy and politics. Some of the best songs in Hamilton are about the personal drives of these larger than life historical figures. Aaron Burr’s “Wait for It” offers a ton of compassion to a character who could have easily been written off as a selfish, spineless opportunist in a lesser work. “Dear Theodosia” shows us the devotion to their children’s futures that Hamilton and Burr are fighting for in building this country, and “It’s Quiet Uptown” offers a glimpse into the depths of grief and love that every lifelong marriage must eventually confront.

This is without even touching upon the mind-blowing choreography and stage design of the show. A massive spinning disc in the middle of the stage allows for the illusion of a huge range of movement in such a small space, with characters going with, or against, it depending on the needs of the performance in question. Walkways and stairs rotate around the stage, representing the journeys and motivations of individual characters, while impressive lighting effects add further nuance and punch to different numbers in turn.

Overall, Hamilton is the musical event of a lifetime. An all-hands-on-deck performance with a mixture of top-tier veterans and rising stars of the industry, Hamilton will continue to live a long life of live performances for many years to come but now those without the travelling ability or financial wherewithal to see the show have a chance to nab a little bit of its revolutionary magic for themselves.

Violence Isn’t the Answer in the Brutal ‘Tainted’

Revisiting ‘Back to the Future’