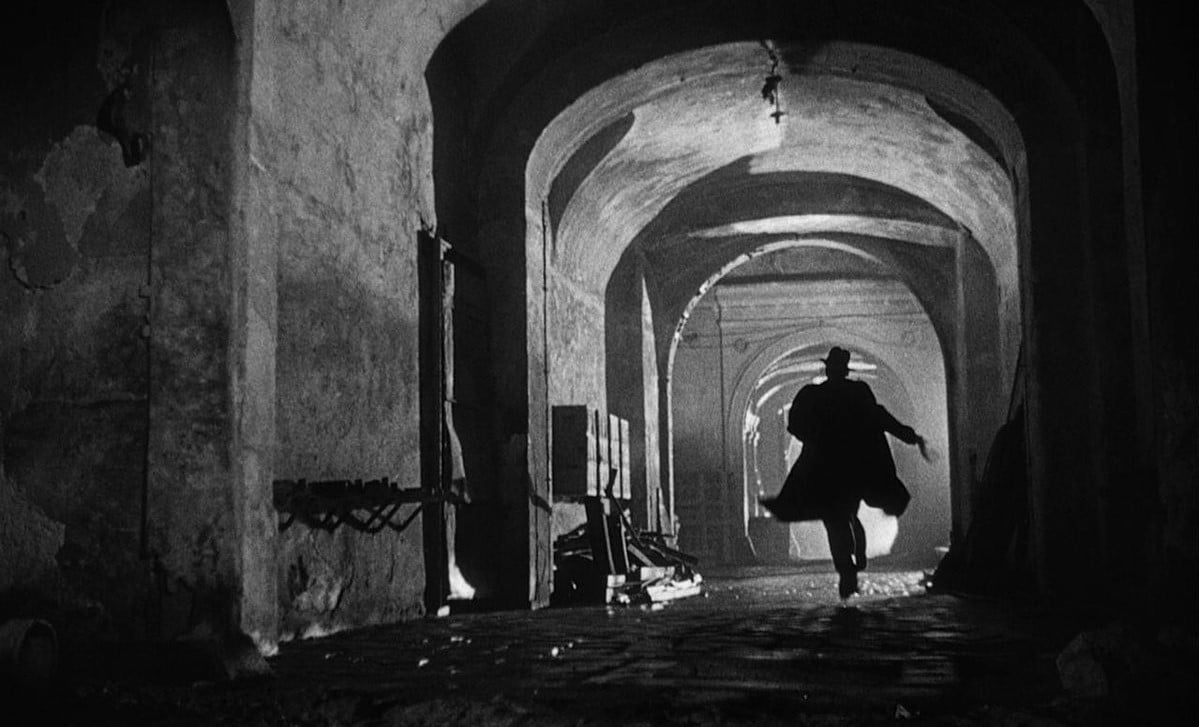 Steven Soderbergh is a name that carries either plenty of weight or none whatsoever depending on who you talk to. For those who went to see the Ocean’s trilogy mostly for its star-studded cast, namely George Clooney, Brad Pitt, and Matt Damon, perhaps the director’s name will fall on deaf ears. For others, the film nerds, Soderbergh is akin to a demi-god. His contributions to modern American cinema in both its mainstream commercial and art-house forms are not to be overlooked. Arguably his most interesting works are those for which he chooses to meld star power with his more artistic inclinations, as with The Informant!, Che, and his 1991 oddball neo-noir, Kafka, starring Jeremy Irons and a host of other familiar faces.

Set in Prague a short few years after the first World War, the story centers on the odd twist of fate suffered by one Franz Kafka (Jeremy Irons), an employee for an insurance company by day and author by night, as the walls of his lonesome, sheltered life are shattered upon the demise of one of his few friends. The police inspector (Armin Mueller-Stahl) tasked with the investigation suspects suicide as the cause of death, but Kafka’s intuitions dictate otherwise, as do those of a small group of would-be revolutionaries (or terrorists), led by Gabriela (Theresa Russell), a co-worker Kafka fancies to a degree. The team had converted Kafka’s friend into their covert operations, some of which involve bombings around the city, and now turn to the protagonist to unravel the mystery surrounding their colleague’s grisly end. What he discovers is a scheme by his employer to change the course of history through medical experimentation.

There is a bucket full of reasons why Kafka is both absolutely weird and captivating. Even with prior knowledge of Soderbergh’s consistent penchant for thinking outside the box to tell stories that strike his fancy, this picture is even further off-kilter than one might expect, the decision to film in black and white not even covering half of said reasons. It also tries to stuff an incredible amount of ideas and styles into the mix, not all of which fit neatly, some of which get shortchanged to a degree. Yet ultimately, viewers who are even moderately adventurous should be captivated by what Soderbergh and his crack team have concocted.

Starting from what can be considered the obvious discussion point, the visuals, Kafka immediately conjures up memories of Carol Reed’s The Third Man, a legendary noir set in a post-WWII Vienna also filmed in black and white. Different city and different time setting, granted, yet the way in which the action is captured on screen is very reminiscent of the aforementioned classic. Prague, often cited as one of the prettier European tourist locations, looks terribly glum and morose here. Kafka the author made a name for himself with stories about oppression in its psychological, emotional, political, and sociological forms. The protagonists of his stories were frequently on the receiving end of harsh, seemingly unfair treatment by institutions, people, and fate. There was often a conspiratorial force operating against his protagonists, said force emerging from established political branches (The Trial) or forces beyond comprehension (Metamorphosis). In Kafka, while said forces combine to create a force not to be reckoned with, it feels as though the city of Prague, especially at night, is working against the protagonist and the covert band with which he forges a tenuous alliance. The scene during which two ominous figures working for the enemy organization give chase to Kafka through Prague’s many streets and stairways is not only beautifully shot, but tonally eerie as well.

Kafka Sends the Titular Writer into a Hypnotic, Labyrinthine Chase After Nightmares

Kafka is overflowing with ideas and characters and the director’s attempts to properly stuff them all in the picture’s 94-minute run time are undoubtedly valiant, even though they do not completely bear fruit. The film begins with the horrific murder of the hero’s friend at the hands of a shadowy figure and his monstrous accomplice: a lobotomized, skin-infected sap whose only two modes seem to be murderous glee and ‘drink binge’ time. It is a shocking start, from which point the story proceeds as a neat murder mystery coloured with undertones of political uprising against the system. Irons, among the great dramatic actors of his generation, is wonderful as the titular self-appointed investigator, playing the part with particularly uncomfortable social awkwardness. Two failed engagements in the same year (to the same woman, as he likes to stress) and a distaste for much human contact, his Kafka is something of a curious joke, one which is often on him given how no one really understands him. He is smart, even clever in some instances, yet expresses misgivings about any sort of out-of-the-box behavior, hence his initial suspicions towards Gabriela’s explanations about the importance of countering whatever their employer and the police say is right and wrong.

This raises the importance of Gabriela’s character. Played by American actress Russell, Gabriela is the smoking gun that eventually encourages Kafka to set aside his timid nature in favour of risking his life to unearth his superiors’ (among them Alec Guinness!) plans. Kafka’s relationship with Gabriela is complex, far more so than in traditional noir. There are moment when it appears he fancies her, followed by scenes in which he may just be fascinated by her. Her chip-on-the-shoulder attitude pegs her diametrically opposed to Kafka, strength of character-wise, yet her resourcefulness and, despite it all, her need of Kafka’s more logical thinking patterns means they team up in some capacity. Rarely one to satisfy expectations, Soderbergh prevents their bond from reaching any higher ground than mere allies. Interestingly, Gabriella is both femme fatale and crucial ally, never fully embracing either role.

The second half is when Kafka decides to go all out with one of the stranger climaxes to a mainstream film. It turns out that the insurance company Kafka works for has ties to the castle atop of a hill in the city where some unorthodox medical research is taking place. Notions of technological progress, modernity versus tradition, class warfare, state intrusion on the individual’s availability to choose their fate: all (and possibly more) are harboured, some more explicitly than others. If, during the first two-thirds, the film embraced a gloriously somber noir identity, the final third ventures in Cronenbergian/Kubrickian territory, not only visually but thematically as well. Dr. Murnau (Ian Holm), the mastermind behind the plot to kidnap unfortunate souls and turn them into near-mindless beasts to counter the potential revolution brewing covertly, has one of the oddest looking set-ups a movie villain could desire. Blofeld would be jealous.

The most salient point argued in the climax is the question of progress, technological and societal, when instigated from above rather than from the grassroots. Success breeds success, absolute power corrupts absolutely, both adages applying in the case of Dr. Murnau’s cerebral experimentation. The perverse aspect to his endgame is that whilst brilliant minds are working hard on medical advancement to understand human behavior, their efforts are intentionally making people dumber, literally, against their will. To be sure, it is an exaggerated depiction of societal advancement aiming in the wrong direction, yet one that produces some shivers down one’s spine.

“It is difficult to peer one’s eyes away from Kafka.”

One aspect in which the film does not fully come together is its surprising reliance on comedy, B-movie performances, and exaggerated odd visual cues. Not that the funny bits fall flat (Kafka’s assistants, played by Simon McBurney and Keith Allen, are at times hilarious), nor that such acting has no place in this film, but some may not be able to help the feeling that just when the movie could be pushing the creepy tone hard, it holds back a bit too much. Make no mistake, the ideas are there, as are explicit scenes in which the mood takes a dark turn. Even so, by the film’s end, it is possible that a few will come away with the impression that Kafka was but some weird fun and not much else. This might depend greatly on what sort of a movie one wants as opposed to accepting the film one gets, a balance critics sometimes fail to obtain.

Steven Soderbergh, screenwriter Lem Dobbs, the cast. and crew come together to produce one of the more striking films of the director’s career, which is saying a lot considering the number of vastly different projects he helmed. It is difficult to peer one’s eyes away from Kafka. It looks stupendous, features some handsome performances and a shape-shifting tone that, while difficult to pinpoint, nonetheless suggests the now-famous director’s ability to crisscross from genre to genre at the drop of a hat.

Touch of Evil is a Masterclass of the Film Noir Genre