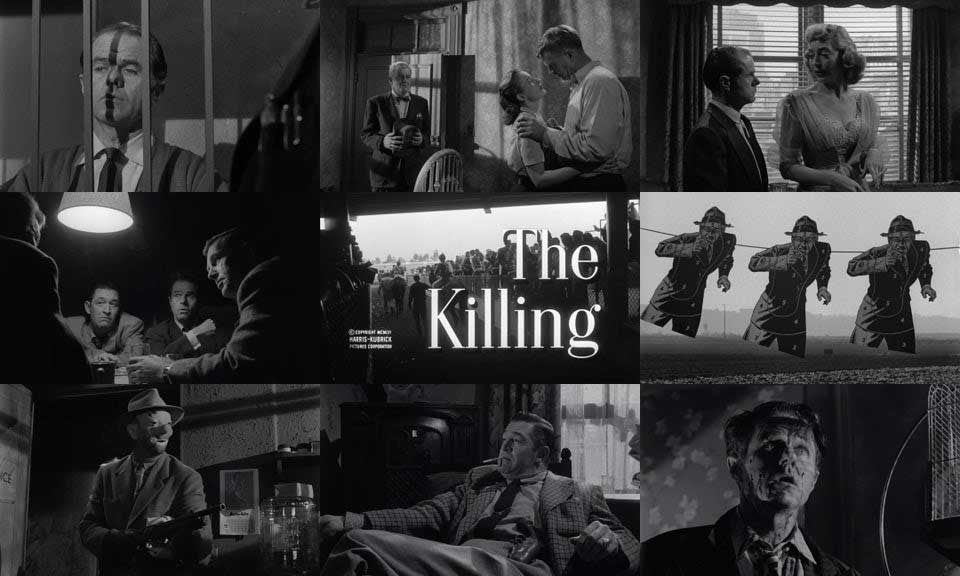 Stanley Kubrick, now there is a name evocative of so many immediate thoughts and emotions for movie buffs everywhere. Infuriating, coldly mechanical in his depiction of people, difficult to comprehend. He was also an intelligent screenwriter, deeply profound in the exploration of themes in his films, and meticulous with his sets and camerawork like only a handful of other directors were before his time, during his time, and ever since his passing in 1999. His films consist of a laundry list of all the major film genres, save the western, which he never ventured into. From 2001: A Space Odyssey to Eyes Wide Shut, Kubrick seemingly told thought-provoking tales through a wide variety of cinematic prisms. Lest it be forgotten that the man began his career as a creator of major motion pictures in the film noir genre. This week, the column explores the ins and outs of his 1956 noir-heist picture, The Killing, starring Sterling Hayden.

Kubrick has his film open at the location where the plot’s primary, immaculately constructed set piece shall occur later on: a racetrack stadium. A few of the employees, namely the bartender Mike O’Reilly (Jow Sawyer) and the cashier, George Peatty (Elisha Cook) where customers claim their bets, have gathered forces with thief Johnny Clay (Sterling Hayden), who only just recently finished his prison sentence, to plan an intricate heist scheme wherein they shall rob the stadium coffins of the money. Johnny estimates that their collective winnings if they can be described as such, would total approximately 2 million dollars, which was a healthy dose of money in the mid-1950s. A crooked cop (Ted de Corsia) is also part of the plan, as are a slimy war veteran (Timothy Carey), handicapped in the leg during combat, and a jovial, titanic wrestler who goes by the name of Maurice (Kola Kwariani). Once the plot is accomplished, Johnny will finally settle down with his girl Fay (Coleen Gray), although certain complications make the preparations difficult, such as George duplicitous wife Sherry (Marie Windsor), the latter who wishes to somehow get the money for herself and her secretive lover, Val (Vince Edwards).

A surface-level evaluation of The Killing may have one conclude that Kubrick’s film evolves, in terms of its narrative, very much like the majority of heist films. To draw such a conclusion is to not be very far off, although, in truth, even at this relatively early stage in his illustrious career, Kubrick had begun to manipulate his films in ways that made them far more rewarding than on initial viewing. Whereas many of his other films need to be re-watched in order to make heads or tales of them (A Space Odyssey, Clockwork Orange, and The Shining being but three examples), The Killing merits multiple viewings in order to understand how delicately produced the story and characterizations are. Yes, on face value everything seems simple, but Kubrick, in true Kubrickian fashion, constructs an exciting little potboiler if mainly for the relationships between the individuals involved in the plot and the structure of the overall story, the most recognizable instruments being the voice-over narration and the somewhat mixed timeline in which the events are presented by the director.

Sterling Hayden, who would go on to collaborate with Kubrick again some years later in Dr. Strangelove, portrays a character similar to the one he did in John Huston’s The Asphalt Jungle in that he is a criminal with a record who just left jail, albeit with more cunning and smarts than the other fellow. Hayden plays the part with the sort of cockiness only an actor of his nature and caliber can. Johnny is definitely the self-appointed leader of the operation and calls the shots, but he is never overbearing, nor does he overstep the boundaries of professionalism, acting in with cool manners as if the heist, which is obviously going to be quite difficult to pull, is a cinch. That sort of attitude is precisely what the group requires if it is to operate as smoothly as possible. Take that character and counterbalance him next to the weakest link in the bunch, George Peatty, wonderfully brought to life by the ever neurotic Elisha Cook Jr., and one begins to see the necessity in having a chap like Johnny around as team captain, especially when boosted by the physical presence of Hayden. George, in contrast, is a ball of nerves, absolutely incapable of repressing the tension afflicting him given the beautifully risky operation on the horizon. It does not help one iota that his wife, Sherry, refuses to answer to his whims. Why the two ever got hitched is revealed early on, when Sherry complains, in her typically vile, sarcastic way that George promised riches galore those years ago, yet they still only live in a mediocre apartment and eat disgustingly ordinary meals. George espouses his love for her in his own hypersensitive style, yet far be it from any half-intelligent viewer to understand that dear Sherry has long laid to rest any reciprocal feelings she may have once held…if she ever held any at all. Elisha Cook and Marie Windsor could not possibly be more different actors, which makes their unhappy union, a rapidly unwinding union in fact, all the more compelling. The woman leads with her deception and the man follows despite himself.

The Killing takes a few steps further than a lot of other heist-themed film noir entries in how it presents events and details to the viewer. The opening minutes of the picture are supremely effective. As previously stated, it opens with images of the busy racetrack stadium, with spectators walking about in the hallways, horses marching up to the starting gate, and the riders making their final preparations. Rather than supply the moving images with the sounds of the location, Kubrick offers as accompaniment the opening cues to Gerald Fried’s memorable score. The notes remind one of a military march, one not so concerned with great showmanship for the purposes of entertaining a crowd. Rather, it is harsher than any ordinary march. Its precision hints at the precision and tension involved in the military itself, an idea that lends itself rather well to the proceedings. Johnny’s plan has no choice other than to function like clockwork. Speaking of clockwork, the narration provided is unlike that found in most other films. Rather than enter the minds of the characters, or, as in the worst cases, redundantly explain precisely what is unfolding on screen, the eerily neutral yet powerful voice will, at various times, elaborate what time of day it is when so or so is doing something related to the heist. It is quite an effective tool in allowing the viewer to truly be a part of the group and understand what is being done and in what order, which of course brings the discussion to one remaining peculiar feature in Kubrick’s film, that being the order in which he reveals certain events. For comparative purposes, it could be argued that what Kubrick does in The Killing, especially as the heist itself is executed, was emulated decades later by Quentin Tarantino in Jackie Brown. Certain major developments that affect in one way or another the outcome of the heist are not necessarily shown in chronological order. Whether such a decision was requisite to make the heist compelling is an interesting debate, one that may produce compelling arguments on either side of the debate. Nevertheless, seeing what some members of the gang are doing when, as viewers, already knowledgeable of what happens to others, later on, adds another dimension to the event. Can Johnny still pull it off despite what is to come?

No arguments shall be made here as to what rank The Killing deserves in Kubrick’s magnificent filmography. By its very nature, it does ‘wow’ as much as his more aesthetically and thematically provocative later work. It does however offer some insight into how the director slowly molded his storytelling style into what it would mostly be known for, not to mention that it is, at its core, a nifty little thriller.

‘Killer’s Kiss’ is an underrated Film-Noir from Stanley Kubrick

Who Framed Roger Rabbit? is Undoubtedly a Once in a Lifetime Film