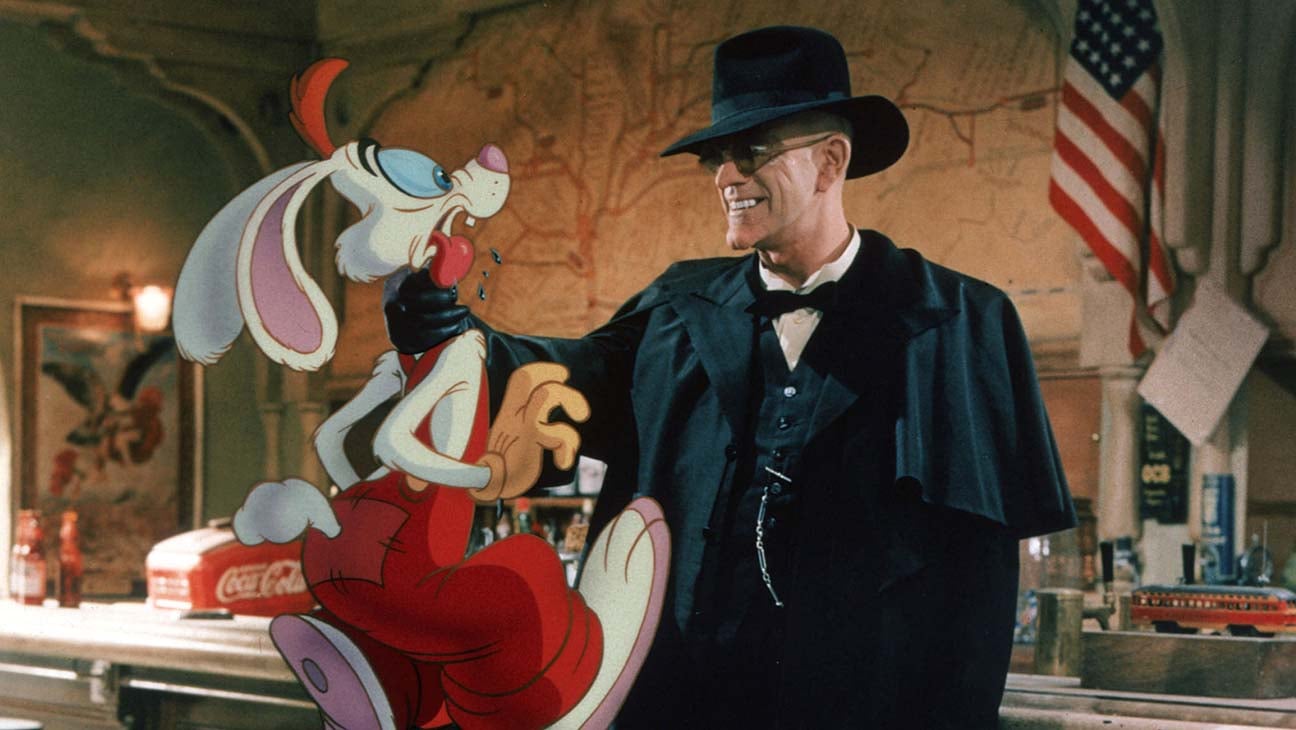 Visual effects have come a long way since the 1920s when pioneering directors the likes of Carl Theodor Dreyer and Jean Renoir, amongst many other notable filmmakers, attempted to marry real-life actors and sets with added optical illusions, bridging the gap between the real and the artificial. Today, the meshing of effects work and live-action has reached the stage where the actor becomes the effect through the popularized motion capture process. A strong proponent of the technique is director Robert Zemeckis, but before dabbling in it, he started out pushing the boundaries of visual effects in one of the most impressive and visually unique projects of the 1980s, Who Framed Roger Rabbit?, a film that has actors like Bob Hoskins and Christopher Lloyd constantly interact with two-dimensional animated creatures.

Set in 1947 Hollywood, the golden age of the studio system, Roger Rabbit follows the story of toon-hating private detective Eddie Valiant (Bob Hoskins), who, against his better judgment, comes to the aid of toon actor Roger Rabbit (Charles Fleischer), who has been framed for the murder of a rival studio’s CEO. Roger claims his innocence, but it would appear there was the motivation for the crime, seeing as the departed had apparently engaged in an affair with the Rabbit’s wife, the luscious Jessica Rabbit. Both must soon contend with a dangerous, mysterious law enforcement officer named Judge Doom (Christopher Lloyd), who also expresses disdain for toons and even liquidates them whenever the opportunity arises…

Who Framed Roger Rabbit? is charged with being wildly imaginative and unique

Zemeckis’ Roger Rabbit is the sort of film whose chances of ever being made again are slim to none. The reasons are numerous, some quite obvious, such as the co-participation of Warner Bros and Disney, hence the appearance of iconic characters from both studios, oftentimes in the same scene interacting with each other. Another aspect, one that brings the article to the topic of film noir, is the unexpected subject matter and themes permeating throughout, almost all of which are in the spirit of classic noir, much less so material found in lighthearted films involving Daffy and Donald Duck. Zemeckis and his crew create a universe out of two seemingly incompatible pieces. There were never any noir-themed movies intended for family entertainment, either in the vintage era or in any of the subsequent neo-noir interpretations. Conversely, traditional Warner and Disney animated projects rarely developed themes of infidelity, promiscuity, depression, alcoholism, and social stratification as major plot points or as in-depth as is the case here. Nor did they feature extremely graphic deaths of their cartoon characters, yet another shocking event in Roger Rabbit. The bravura of such a storytelling related decision is not merely due to the fact that cartoon characters are mixed up in all of this (a select few works of various Japanese animators or even the American Ralph Bakshi perfectly exemplify this) and much more the decision to have characters typically found in Saturday morning cartoons live in a world where these vices exist. One need look no further than the titular rabbit, who is the object of no less than three adult-oriented themes: he is the prime suspect in a case of murder, and he wrestles with the depressing possibility that his wife, Jessica Rabbit, is cheating on him with another man, and, in an inspired bit of storytelling, is used as a ticking time bomb at times by virtue of his body’s inability to properly process alcohol. If he gulps booze, he enters and suffers an episode of uncontrollable energy, bouncing about like a rocket.

The human element of the story is equally steeped in quintessential noir, if not more so than the animated half of the film. The human protagonist, Eddie Valiant, is a man oppressed by many demons, some of his own doing. A private eye, he goes through life haunted by the murder of his brother, who was crushed by a piano dropped onto him by an evil toon several years ago. The villain’s maniacal stare has remained etched in his memory ever since, and so has he expressed unreserved disdain for toons at large. every as ever since been a heavy drinker, requiring booze like most people need H2O. This is not the stuff of children’s stories. While not Bob Hoskins’ best role or work, save for the fact that he had to pretend to be acting with an overly excitable cartoon rabbit for much of the shoot, he definitely brings a solid gruffness to the embittered, temperamental Eddie. Hoskins was always a very dependable actor and occasionally a great one. In Roger Rabbit, he has to find the right balance between a hard-boiled, emotionally aggressive character and just enough of a softer side to make Eddie more palatable for non-noir viewers. He is supported by an exceptional cast, including Joanna Cassidy as his love interest, Charles Fleischer as several of the animated characters, including Roger, and the magnetic Christopher Lloyd as Judge Doom, for which Lloyd gives the creepiest performance of his career.

The noir themes also help the human and toon worlds converge together once the deeper, more insidious scheme is revealed. Forces are conspiring to build a superhighway straight through Toontown. After all the crazy conundrums with Roger and the more personal journey belonging to Eddie, the movie presents this third side to the story, one that harkens to the many changes undergone in the United States following World War II as the country further imposed itself as a mighty industrialist and economic force at home and abroad. To accomplish lofty goals for the economy, big decisions were made, some that directly attacked the nicer, more virtuous, and romantic notions of American identity. It is the seedier underbelly that drives greed, the more ruthless philosophy that gestates beneath the colourful facade of innocence amid good, cleverly represented here by colourful cartoon characters.

Roger Rabbit is undoubtedly a once-in-a-lifetime film. It was one of the very first movies to bring together animation and live-action for the entire running length and characters from completely different movies and studios. It also offers more than enough for those looking for a wildly entertaining romp, and amidst all of it, there exists a pretty solid noir story for fans of that genre as well. While the picture, aiming for family entertainment, never fully embraces its darker subject matter, it is very much present and provides Zemeckis’s film with a lovingly unique identity.

Stanley Kubrick’s The Killing is a Nifty Little Thriller