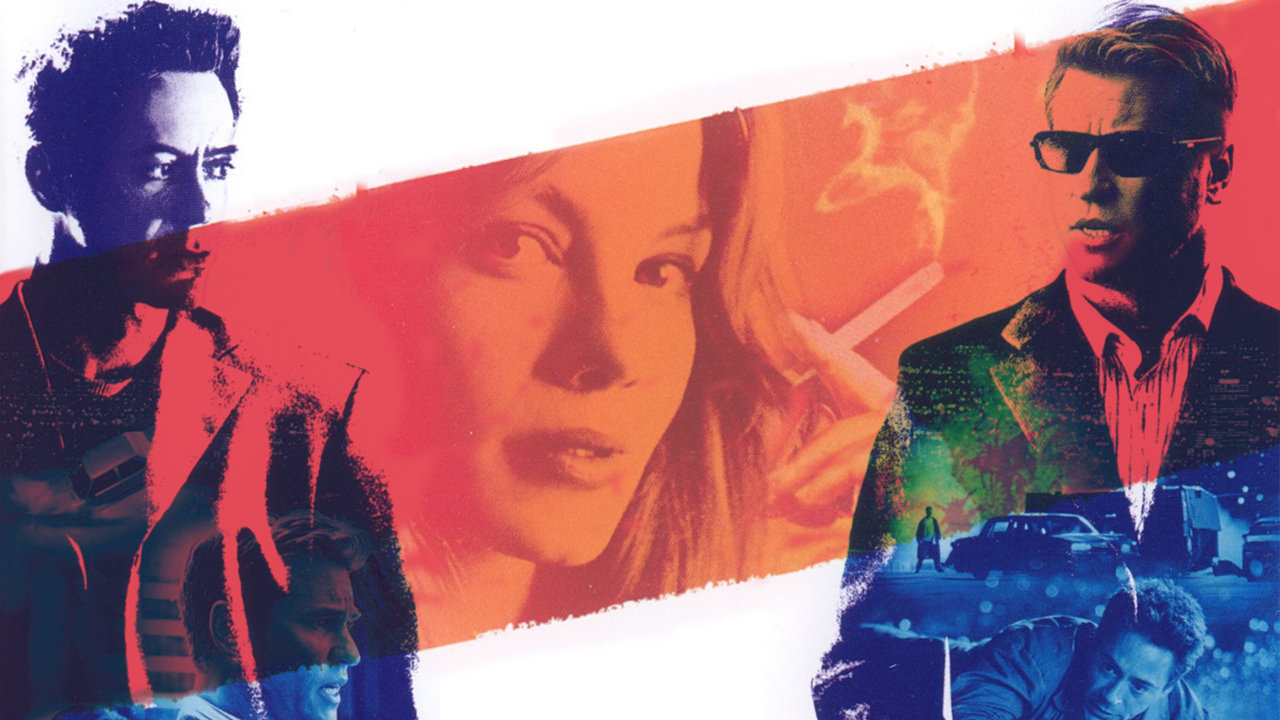 It wasn’t long ago that the Howard Hawks classic The Big Sleep, starring Humphrey Bogart and Lauren Bacall, was reviewed for the purpose of this column. Certainly an amusing film, the highlight of which is the pitch-perfect acting from each and every cast member. That said, what held the film back to a degree was its insistence on adhering to the spirit of the original source material insofar as it was so complex and filled to the brim with revelations and twists that the screenwriters themselves had trouble sorting it all out. Fast forward some 60 years and writer-director Shane Black, a big fan of detective and noir-inspired stories, made his debut as a director with Kiss Kiss Bang Bang, a story which owes a lot to the noir of yesteryear while still feeling right at home in modern western cinema, occasionally cumbersome plotting notwithstanding.

Harry Lockhart (Robert Downey Jr.) is nothing more than a petty thief on the prowl for a last-minute Christmas gift for his nephew when a ludicrous turn of events in the span of just a few minutes sees him earn the interest of some big Hollywood talent scouts hoping to scoop up a cheap, unknown actor for an upcoming film. Subsequently relocated to the city of Angels, he unites with two vastly different individuals who will both make his stay in Los Angeles more meaningful and dangerous than he could have ever bargained for while bumming around at a nocturnal poolside party. One is Harmony Faith Lane (Michele Monaghan), a childhood friend and high school crush of Harry’s who left their small Indiana town to pursue acting, a dream which never really materialized. The other is the extremely sarcastic, cocky, and homosexual private detective, Gay Perry (Val Kilmer) assigned to offer Harry some cursory ‘training’ for his film role. What ensues is a comedic yet deadly adventure involving the unexpected death of Harmony’s sister and the possible murder of the daughter of one of Hollywood’s most influential moguls.

The somewhat ambiguous description of who died and how in the above synopsis directly relates to the sort of plot Shane Black’s Kiss Kiss Bang Bang develops as it trots along at its own lively pace, exposing plenty of colourful characters and situations from start to finish. It never becomes clear until the very end just exactly who died, when, how and, assuming they were murdered, for what purpose. Granted, the movie partially functions as a ‘whodunnit’ and therefore the mystery behind the deaths of the young women is the platform upon which Black chooses to explore and develop some of the most amusing protagonists in an American film of the past decade. Even then, there are plenty of small details and bits of information shared throughout which should presumably enlighten the viewer as to what exactly is happening but might just as easily confuse some viewers, especially upon first watch (for the record, this was the author’s second viewing). Perhaps it is the film’s modern setting or just the pervasive modern cinematic sensibilities of today which easily respond to snappy dialogue replete with snark, heavy graphic violence, and more overt profanity, but Kiss Kiss Bang Bang easily overcomes any confusion that might arise from the plot-heavy details with some brilliantly funny dialogue, finely tuned, memorable performances and some honest to goodness interesting character development happening beneath all the mayhem. Arguing that Kiss is a superior film to The Big Sleep would assuredly come across as heresy to many. One was directed by a seasoned veteran and has had the benefit of almost 70 years to gestate in the hearts and minds of fans. The other was directed by someone at that time only known for his screenwriting and has only been in the public consciousness for barely 8 years. Suffice to say, some might be inclined to offer Kiss a rewatch before Big Sleep and for perfectly legitimate reasons.

Regardless, for a debutant Black storms out of the gate all guns blazing, embellishing in the many noir tropes he loves best while setting them in a modern film context. The character of Harry Lockhart might at first seem like any street smart wiseguy who tries to outsmart his enemies, but the reality of the situation is that he is a tremendously flawed individual, himself admitting to his limitations as a human being. In flashbacks, the viewer learns that Harry was a big admirer of the art of magic tricks as a child. His life trajectory has therefore taken a curious turn for the worse seeing as now he commits thefts, albeit fairly poorly planned ones, an altogether different sort of way to perform tricks on people. He admits that his life is nothing more than a series of half attempts at trying things, only for his laziness and lack of direction to undo him. The unfortunate demise of Harmony’s sister and the latter’s insistence of wanting to uncover the truth is the opportunity Harry needs to actually accomplish something, even it means engaging in a trade, detecting, he knows nothing about. It might not sound like the most thought-provoking character arc, but it serves the purpose of grounding the character of Harry just enough for the audience to relate to him. Of course, Robert Downey Jr helps too. Having gained supreme popularity in three Iron Man films and an appearance in The Avengers, seeing him in Kiss is a wonderful example of just how good he is as an actor. Many of the traits Harry displays were ported over to the cinematic Tony Stark, most of those simply being a function of the sort of actor Downey Jr is, but while Harry may feel just as confident with his smarts as Stark, in truth he is far dumber and in over his head. He certainly has made a name for himself by playing someone who exudes confidence, almost too much at times, so Kiss serves as a reminder that he can display at least some vulnerability. He is obnoxious, loud, and can be a jerk, yet he ultimately earns the viewer’s empathy.

Michele Monaghan, ironically enough an actress who, a bit like her character, never really made it that big in Hollywood notwithstanding some appearances in a few blockbusters, is really good as Harmony. She brings a welcomed dose of realness to her role, balancing courage, comedy, intrepidity, and a little bit of sex appeal. As Harry likes to point out, most people in Hollywood seem weird to anyone unaccustomed to its outlandish high society culture. Harmony, on the contrary, is from the same small town as the protagonist. Far from perfect, her own flaws are exposed in some very unflattering ways throughout the film but that also makes her feel very authentic, and coupled with Monaghan’s natural glow as a performer, the character of Harmony is one that easily wins the audience over. She is not quite a damsel in distress but nor can she solve the puzzle without assistance from Harry and Perry. Speaking of Perry, it goes without saying that Kiss has earned almost as many fans for Robert Downey Jr’s performance than it has for Val Kilmer’s, if not more so. Perry is the character who changes the least from the start of the picture to the end although anyone would be forgiven for not caring at all about a lack of development. The hysterical, mean spirited lines he is given and the manner with which he spews them is a thing of beauty. He is a narcissist, vulgar, and never too shy to ridicule the low competence level of the folks he is dealing with, which naturally includes Harry. He nevertheless fights the good fight, making him a dependable ally despite it all, but pity the fool who takes him for a ride. Repercussions may be delivered verbally or at the butt of his fag gun (actual weapon in the film).

Director Black peppers his film with many touches which should resonate loudly with fans of noir and hard-boiled detective stories, going so far as to put some clever twists on said touches. For one, there is the voiceover narration courtesy of Harry, only his mind is so spastic at times that he will accidentally omit key details and then point out, mid-narration, that he has forgotten the detail and that his narrating skills are terrible. There is the presence of a slick private detective, Perry, but whereas such characters are usually the leads, here is a supporting player (and gay) while the viewer follows the amateur private dick, Harry. The film itself is divided into chapters, each with their own titles, themselves sometimes direct references to old noir pictures (such as Robert Montgomery’s Lady in the Lake). Other aspects are more of the ‘meta’ variety, such as Harmony being a big fan of a series of cheesy, violent detective stories that frequently have its protagonist discovering that two separate cases are in fact related, which is exactly what ends up happening in Kiss Kiss Bang Bang.

The true directorial flourishes are not that numerous in Kiss. Black shows off some funny editing at times, particularly when Harry’s narration kicks in but overall he trusts the script, which he wrote after all, and his cast. Black’s strengths rest primarily with character relations and the ability to concoct a compelling story, with a pace that moves like clockwork out of a bunch of wild plot details. Moviegoers today know that he is capable of handling a big-budget production, that being Iron Man 3, yet Kiss Kiss Bang Bang‘s impact amongst movie fans, when released in 2005, was nonexistent by virtue of the fact that no one went to see it. By all means, one should go ahead and remedy that problem if they have not already.

Who Framed Roger Rabbit? is Undoubtedly a Once in a Lifetime Film