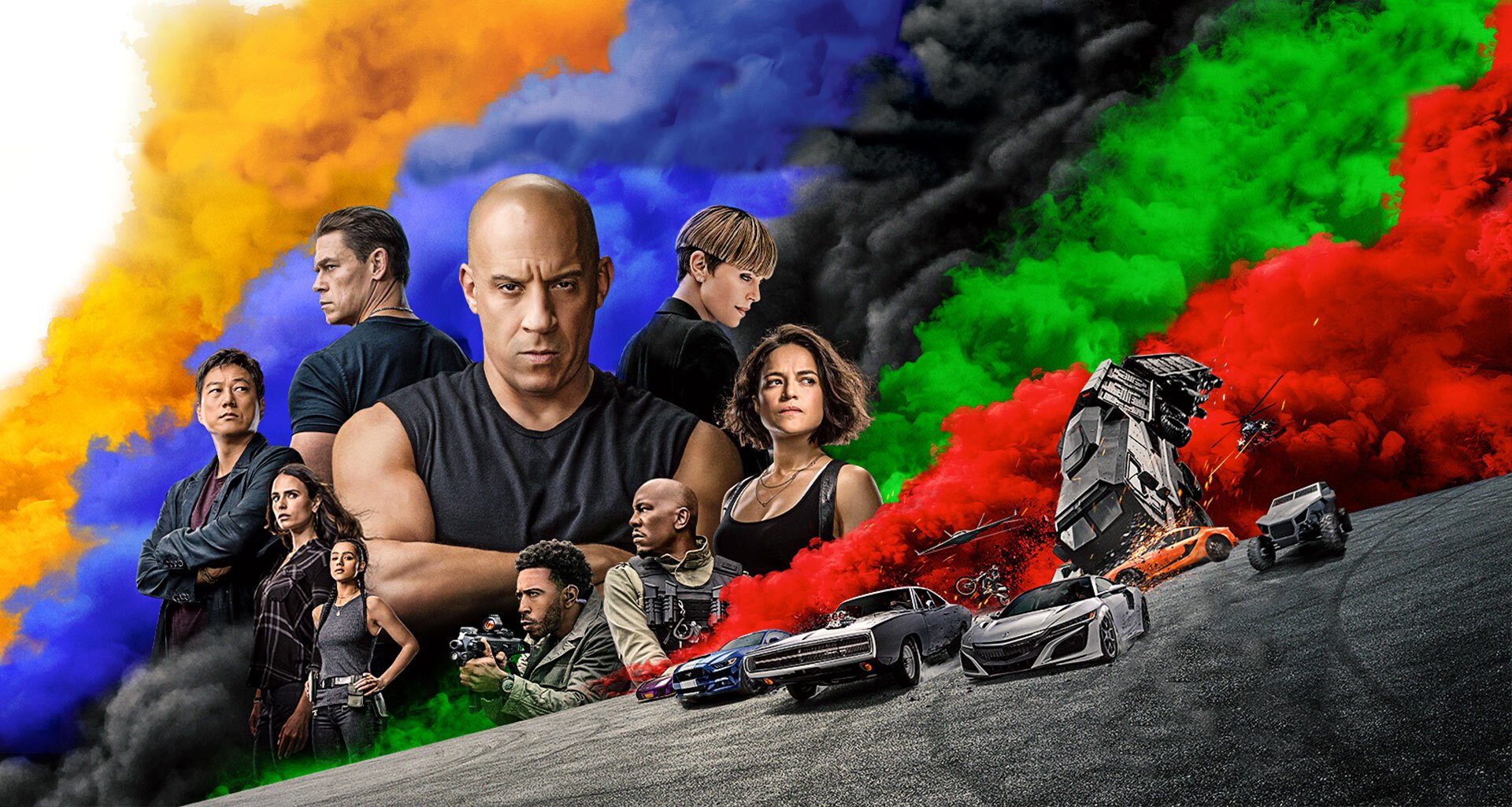 For a series that has gone from low-stakes DVD player heists to grandiose death-defying stunts which no human should walk away from, it’s perhaps too little too late for its characters to finally wonder, “Are we invincible?”. At the same time, F9: The Fast Saga (the titling of these movies is only going to get weirder and weirder, it seems) features an array of the most insane, high-octane action sequences that somehow stand taller than even some of the best moments in the previous eight entries. Justin Lin returns to the directing chair to push the series back in the direction it was headed in Furious 7 and spends as much time as it needs to explain away every question you probably don’t have and some you most definitely do. Even then, F9’s bloat doesn’t take away from it potentially being the most daring entry in the franchise that is almost impossible not to walk away from with a massive smile on your face.

Opening with a stock car race set before the events of 2001’s The Fast and The Furious, F9 begins with a look at the events that pushed Dominic Toretto (Vin Diesel) into a life of crime and street racing. It also introduces the audience to Dom’s brother Jakob (whose teenage self is played by Peaky Blinders’ Finn Cole and John Cena plays his adult self), who disappeared from Dom’s life after a tragic accident took the life of their father and created a rift between the two brothers. These flashbacks are intermittently placed throughout the film, each one generally offering some new tidbit of information as to how the two Toretto’s fell out of each others’ lives. They’re also surprisingly well-acted sequences with Vinnie Bennett giving a great performance as a young Dom and Michael Rooker as the teenagers’ guardian figure, Buddy.

The events of the past eventually catch up to Dominic and his crew when Roman (Tyrese Gibson), Tej (Ludacris), and Ramsey (Nathalie Emmanuel) show up on Dom and Letty’s (Michelle Rodriguez) doorstep with a distress call from Mr. Nobody (Kurt Russell) exclusively for Dom’s crew. F9 feels the most contrived in getting the team back together for another mission around the world, barely spending any time convincing Dom and Letty to get back in the driver’s seat. It’s also another example of the films reaching out for any character who has ever existed in the franchise and introducing a couple of new characters like Jakob, Otto (Thue Ersted Rasmussen), and Elle (Anna Sawai). While the new additions outside of Jakob aren’t exactly noteworthy, they are fun enough and tend to serve as a means of explaining away plot holes (though very loosely).

Jakob’s inclusion in the franchise also emphasizes the improvisational nature of how Dom and his crew operate during a mission versus the meticulous planning of his brother. Spending his whole life in Dominic’s shadow, Jakob is now a secret spy who excels at what he does in a world that Dom only recently has found himself thrust into. They’re both great at driving, though. The differences between them are largely due to Jakob having to be one step ahead of everyone he works with, as they’re all consumed by greed and power. This contrasts with Dominic’s loyal crew that will follow him to the ends of the Earth. In the end, though, the film boils down to Jakob is with the bad guys, so he can’t possibly win because there are no stakes in this franchise anymore.

Depending on who you ask, F9 is either going to be perceived as too concerned with its mythos or too aware of its absurdity. Roman finally begins to question the team’s superhuman feats and the lack of stakes in everything they do – something which audiences have accepted as just par for the course in the Fast series. It’s immediately off-putting as characters now seem accepting of the fact that there is no risk, which is why they’ll attempt any insane idea that pops into their head to escape death. Though why death is even a concern for the team is questionable at this point, because the big calling card for this film is the return of fan favourite character Han (Sung Kang) – a character whose death was very explicitly shown (just outside of showing his corpse) and became the lynchpin of the series’ convoluted timeline.

This is where fans of the franchise before might finally jump ship. There’s an explanation for Han’s death, but it’s long, more convoluted, and asks a few more questions than it probably ever intends to explain. Yet, the entirety of Fast & Furious 6 also spent a good chunk of time trying to explain how Letty didn’t actually die in the fourth film. This was largely what bogged down The Fate of the Furious as it introduced a son Dom didn’t know he had, and one whose presence in F9 feels like a constant afterthought as Dom drives cars off of cliffs. The story in these films is not good, but it has always been entertaining. However, as the series has continued expanding and filling in details of its lore, the entertainment value has become second to trying to seem more important.

That being said, if all of that exposition is the price to pay for some of the series’ best stunts, then honestly, it’s worth it. F9 starts with a stock car race, moves into cars swinging over oceans, adds magnets to the mix, and then culminates in one of the most absurd moments in a franchise that always feels like it’s trying to one-up the previous stunts. “As long as we obey the laws of physics, we’ll be fine” might be the most insane line for any character to spout during a climax that absolutely does not follow the laws of physics in a series that has seemingly not cared one iota about ‘laws’ and ‘rules.’ The philosophy behind every action scene has always felt like “Can we get away with this? And more importantly, will the audience have fun?” One might be able to argue that no, they cannot get away with this, but on the other hand: every stunt feels handicapped in Toretto and crew’s favor even when narratively they’re quite obviously not. The in-universe logic is that if the team tries, they will succeed. No matter how stacked the odds are against them.

F9 is constantly calling back to Roman’s self-awareness of the crew’s invincibility even in the stunts. There’s an incredible sequence that revolves around the idea of someone not knowing how to drive but being forced to pull off a Fast and Furious stunt. It becomes an unintelligible mess barely held together by duct tape as it employs pseudo-physics and a “Go with God” mentality. And yet, it is both hilarious and a ton of fun. That goes with almost every action setpiece and has always applied to the series. It feels more in line with Dom catching Letty over a freeway in Fast & Furious 6 or Dom and Brian driving a sports car between two skyscrapers than the simpler times of dragging a vault through Rio de Janeiro in Fast Five.

The staying power of the series is always going to be whether seeing these characters do out-of-this-world action is entertaining. There’s no reason to mention the performances in this film because they are the same as all of the other ones, right down to the line deliveries. Roman and Tej’s shtick is somehow still not old, which is perhaps what makes some of their bigger moments in the film have more of an impact than if other characters were in those positions. The only notable performance is Cena as Dom’s brother, but it’s only notable because he fits so neatly into that role. It’s hard to imagine anyone else playing Vin Diesel’s brother in this series, so in that regard, Cena is perfect casting. You’re either on board with these performances by now and the rapport between characters, or you bowed out of the franchise already.

By the end of F9, it all feels like a bit of a course correction from The Fate of the Furious and closer in line with Fast & Furious 6. The series continues to run laps around the same track, but in doing so, it picks up more characters and lore and hastily tries to make them fit, even if it’s detrimental to the endurance of the series. Furious 6 is the entry in the franchise that felt the most formulaic, but it was also a ton of fun. It had some narrative thread to explore, but it was mostly preoccupied with getting the crew back together for one more job. F9 feels similar, though it falters under the weight of all of the story that has come before it. Things aren’t as simple now, and eventually, the wheels are going to come off, but, shockingly, it has stayed so held together for this long. Perhaps like the characters in the series, there is no way to kill this franchise without just saying goodbye.

Italian Suspense in Swinging London: What to expect from Last Night in Soho