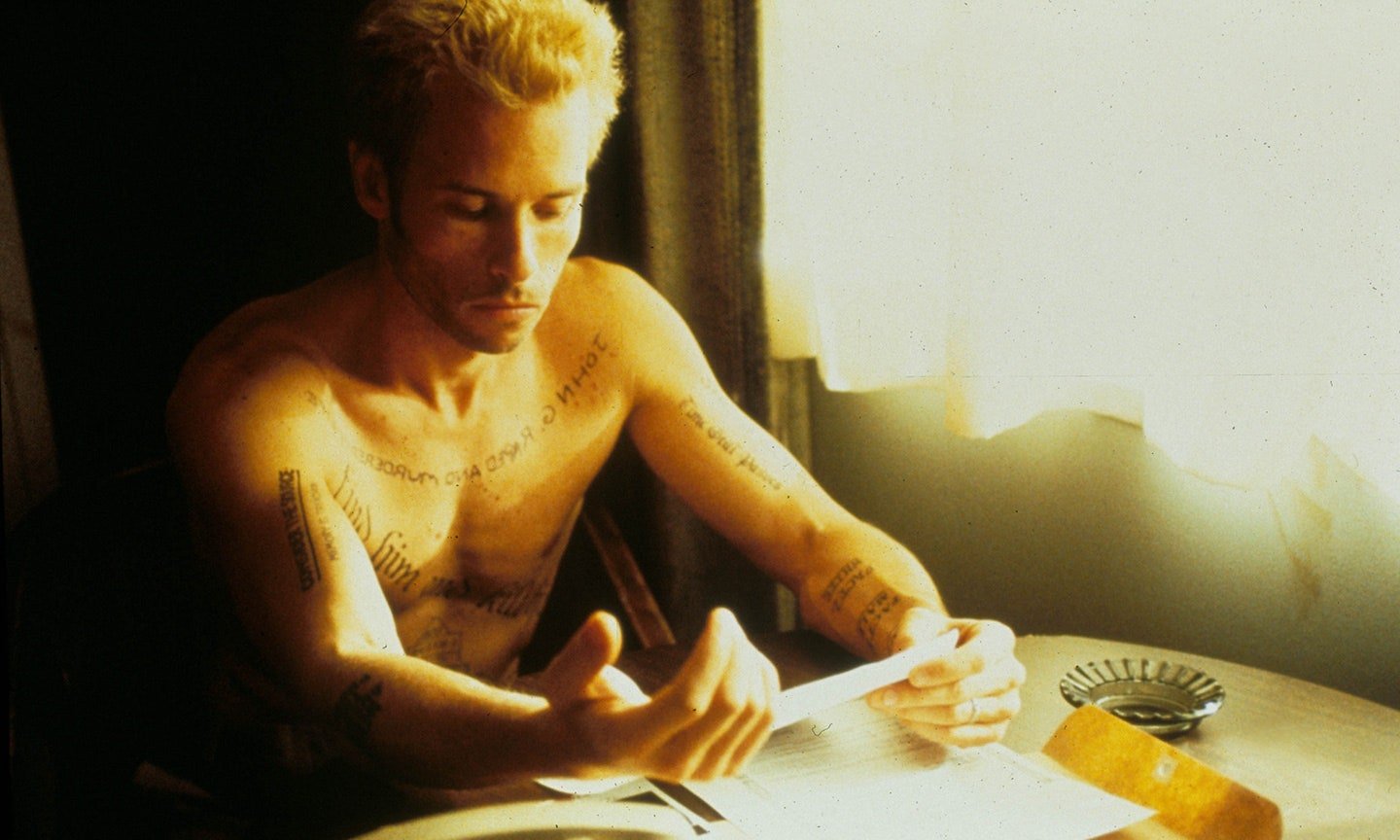 There’s something to be said about neglecting to watch the classics, excuses to be made. A sense of urgency compels you to sit down and watch if nothing else so that you will be able to discuss a seminal work with confidence. This sense of urgency is all the more potent when it comes to modern classics. They are fresh on the mind of serial filmgoers and have a tangible influence on new releases attempting to replicate their success. Memento was released twenty years ago. It launched Christopher Nolan’s career and made it possible for him to become the puzzle film writer/director. And yet I had never seen it until over a decade later.

Christopher Nolan’s films are consistently thought-provoking, deeply psychological, and brimming with neo-noir characteristics. Inception and the Batman trilogy were not only huge box office successes but also genuinely fascinating stories that had people talking for months. More so than these later career triumphs, Memento recalls Nolan’s first feature film. Following was made on a shoestring budget of roughly $5,000, shot only on weekends to accommodate the crew’s full-time jobs, and each shot was done in no more than two takes. The result has Nolan’s style all over it: a black and white, non-chronological story of a struggling writer looking for inspiration that teams up with a burglar. This exercise in guerilla filmmaking was good enough to allow the making of Memento – a non-chronological, black and white and color story of a man, Leonard Shelby (Guy Pearce), with anterograde amnesia searching for his wife’s murderer.

Leonard remembers nothing that has happened since he saw his wife dying on their bathroom floor. The apparent victim of a home invasion, she was attacked and killed by two masked men. Leonard shot one man before being knocked unconscious. However, the police did not believe there were two attackers and never brought the second man to justice. So, Leonard is hunting down the second man who he believes is named John G. His condition forces him to live by the information in tattoos on his body. He remembers places and people by writing notes on Polaroids. The only problem is that he cannot be sure whether the people who offer to help him are telling the truth or manipulating him.

Memento strikes me as an attempt to perfect the stylistic choices of Following. Once again, the story is told non-chronologically, but the film goes one further and literally tells the story in reverse, interspersed with a black and white scene of Leonard explaining his condition over the phone. In the first viewing, this reverse chronology makes it difficult to follow exactly what is happening, specifically exactly who is (or who isn’t) taking advantage of Leonard’s inability to create new memories. Emotions and motivations become hard to read. In this way, the audience shares in Leonard’s confusion at constantly meeting people he doesn’t remember but who know him and know how to use his condition against him. As Leonard explains, his only way to function in these situations is to follow his instincts; he reads people, the honesty in their eyes, or the lies in their body language.

Leonard confronts two unknowns throughout the film: a man named Teddy (Joe Pantoliano) and Natalie (Carrie-Anne Moss), the girlfriend of a drug dealer. From scene to scene, it is impossible to tell whether these two are helping or hurting Leonard’s cause. Certainly, Natalie takes blatant advantage of Leonard’s condition in convincing him to deal with a drug dealer named Dodd but later repays Leonard’s kindness with information on John G. Teddy may or may not be a corrupt cop and, as we see at the beginning of the film, is killed by Leonard because he matches the information on John G. Nolan is purposefully ambiguous about any true resolution to the film. Indeed, Teddy acts as a mouthpiece for the theory that Leonard may, in fact, not have a condition but be wildly delusional.

A more thrilling, morally ambiguous neo-noir could not be found. Nolan delivers a satisfyingly confusing look at vengeance in Memento. I only regret not having seen it sooner. Like his films Inception and Following, as well as an earlier Shame List film Mulholland Drive, Memento requires viewers to interpret its events, with the knowledge that there may not be a definitive, correct interpretation.

Dark City is one of the Best Films of the ’90s