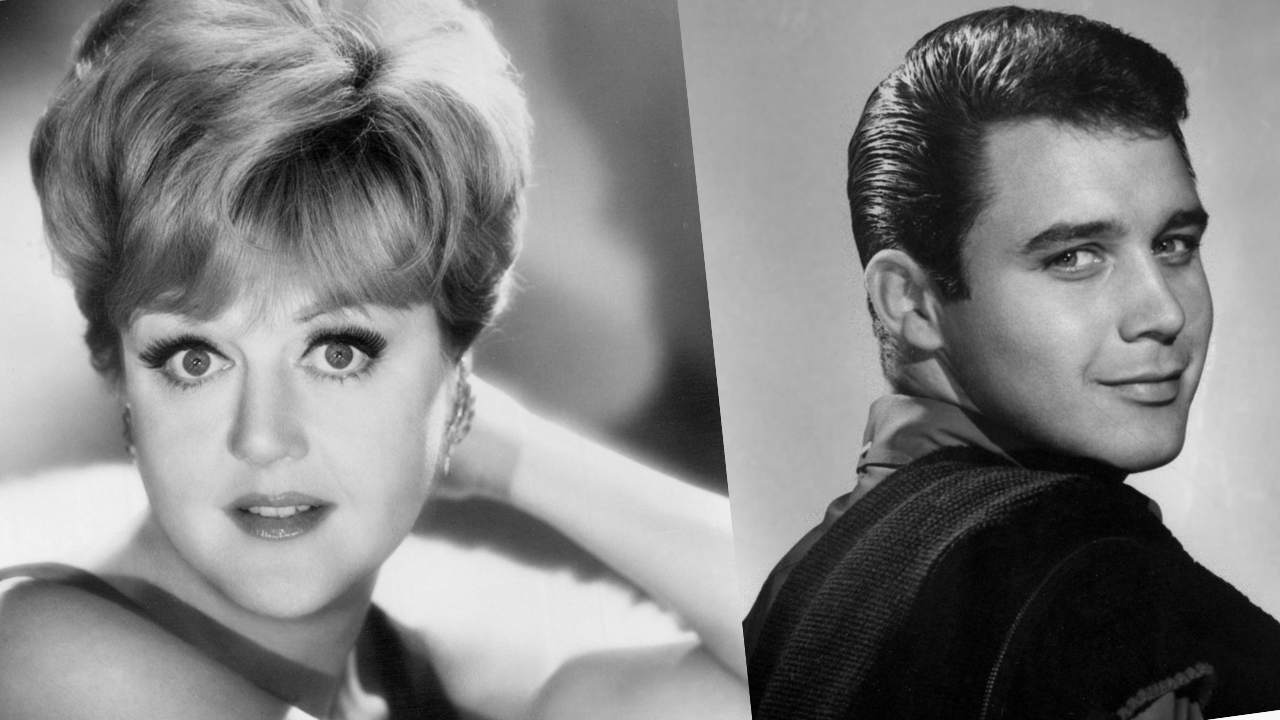 “Actors Are Not Made, They Are Born”

It’s a bit of a cosmic curiosity that Angela Lansbury and Michael Callan passed away within twenty-four hours of each other (October 11th and 10th respectively) because even though their respective careers followed very different arcs, down way underneath there was an uncomfortable commonality.  Both of them were proof that while Hollywood respects and appreciates talent, it doesn’t give it any particular value.  That both were able to sustain lifelong careers — and, in Lansbury’s case, one marked by acclaim, awards, and the salutes of her peers — is noteworthy in itself.

“Actors are born, not made,” Lansbury once said and to that point she found a home on the stage while still in high school.  Actually, her triumphs in theater — such as her star turn in 1966 in Mame which earned her the first of her four Tony Awards — showed that what defined a star on the stage came out of a different – and perhaps more perceptive — mindset than what Hollywood viewed as star potential.

In an interview just last year, Lansbury reflected, “I was never going to get to play the girl next door. And I was never going to be groomed to be a glamorous movie star. And I sort of realized that. So I had to make peace with myself on that score.”

Stars become stars because they become a recognizable brand.  We kind of know what we’re going to get when Tom Cruise is in a big budget action thriller, the same way we used to know what we were going to get in any movie that put John Wayne on a horse.  But while some great actors become stars, that kind of talent doesn’t always find its way to the movie theater marquee.  It becomes as simple a question as, “Will his/her name sell tickets?”  And so, unlike her work in the theater, Lansbury rarely headlined a movie.  That didn’t stop her from turning in classic performances on celluloid.

Like any performer who has had as long a career as Lansbury, how someone thought of her depended, at least to a large extent, on when you first saw her but it was typically in supporting roles, like the cherub-cheeked cockney maid of Gaslight (1944), a role which, impressively in her film debut, earned her a Best Supporting Actress Oscar; slapping Judy Garland around in the musical The Harvey Girls (1946); as the grasping mistress in the steamy (for its time) The Long, Hot Summer (1958); or – in what’s widely acknowledged as her best film performance – as the worst mother since Medea in the classic Cold War thriller, The Manchurian Candidate (1962).  Although it seems demeaning to label such a powerhouse talent as such, Lansbury was, by the 1960s, established as a character actor; capable of enriching a film, but never considered for carrying one.

But maybe you came to her later, when she’d gotten herself Disneyfied with one of her rare lead roles as the Mary Poppin-esque witch in the Old School Disney-corn musical Bedknobs and Broomsticks (1971).  Or maybe still later you discovered her as the matronly author of cozy mysteries and amateur Agatha Christie-esque sleuth in the long-running TV series, Murder, She Wrote (set in a cute little New England town with a phenomenal homicide rate!).  But the fact that she could pull off all those characterizations without breaking a sweat says something about the breadth and depth of her talent.  Then throw in her work on the stage, well, the woman was a bottomless well of acting skill. She could sing, dance, be funny, be — …  Well, just about anything.

The best way I can showcase her acting muscle is to throw two of her best-remembered film roles against each other and be a bit in awe that the same woman executed each to perfection.  Coming at a point in her career when Hollywood tends to unfairly categorize women as “mature,” Lansbury showed she hadn’t even come close to peaking.  There’s Bedknobs…, which despite its flyweight story and typical (for the time) Disney sugary goo, shows a performer in complete command of her instrument:  singing, dancing, capturing that child-friendly playfulness old Uncle Walt loved so much so well that despite not particularly welcoming reviews, Lansbury turned in a box office hit.

At the earlier end of the decade is The Manchurian Candidate with Lansbury in an Oscar-nominated performance that’s still disturbing.  Lansbury is part of a communist plot to install a puppet in the American presidency, but she’s playing the commies as much as they think they’re playing her.  But she’s enraged that they’ve brainwashed her son (Laurence Harvey who, in that magical way Hollywood has with casting, was only three years younger than Lansbury) as part of the plot.  She has a wonderfully chilling monologue in which she tells her entranced son how she plans to use her eventual power-behind-the-throne role:

“…when I take power, they will be pulled down and ground into dirt for what they did to you.  And what they did in so contemptuously underestimating me.”

But then comes the most disquieting part of the scene – hell, of the whole movie; Lansbury seals this deal with her hypnotized son with a kiss to his forehead, then to his cheek, and then on the lips…but it is not a motherly kiss.  Not even close.  To keep the censors of the early 1960s at bay, director John Frankenheimer had Lansbury sort of concealing the incestuous nature of the kiss – somewhat – with her hand, but there’s no mistaking what’s going on, and at that moment, Lansbury became one of the all-time classic, utterly morally bankrupt movie villains (interesting note:  the 2004 remake was more spineless about the moment, cutting away from it completely).

She worked constantly, repeatedly in her later interviews speaking of never retiring, and she never did, her last film appearance being in this year’s follow-up to the 2019 hit, Knives Out, Glass Onion:  A Knives Out Mystery.

Back in 1998, with a lot of work still in front of her, she provided her own epitaph, one I think any performer would want:

She got her wish.

“I…Got Lucky And It Worked Out”

Michael Callan’s career didn’t have the same trajectory as Angela Lansbury’s.  He never achieved the same professional stature, the same acclaim, but as I said earlier, that says more about the casual cruelties of Hollywood than it does about his abilities.

He seemed off to a promising start with work on the stage taking him to an early career peak of landing the role of “Riff” in the original Broadway production of West Side Story.  Maybe things would’ve gone differently for him if he’d gotten to repeat the role in the film, but by then he was under a restrictive contract with Columbia (West Side Story [1961] was a Mirisch-Seven Arts production distributed by U.A.).  Columbia typically cast him in supporting nice-young-man roles in movies like They Came to Cordura (1959 – his film debut) and Ray Harryhausen FX-fest Mysterious Island (1961), and disposable teen fodder like Because They’re Young (1960) – which won him a Golden Globe — and Gidget Goes Hawaiian (1961).

But in the early 1960s, through no fault of his own, he seemed to fall into a niche.  With his dark good looks, sleepy eyes and lopsided smile, he seemed to be getting pigeonholed as the cocky, smarmy, womanizing sort, like the cocky, smarmy, woman-chasing wannabe doctor of The Interns (1962 – reprised in sequel The New Interns [1964]), the sleazy, smarmy GI pimp in WW II drama The Victors (1963), and the sleazy, none-too-bright petty outlaw of Cat Ballou (1965).  He made the jump to TV in the mid-1960s playing a sleazy, smarmy, swinging bachelor in the sitcom Occasional Wife who persuades a hat check girl to act as his wife to help him advance at the staid baby food company where he works.

But Callan’s career never seemed to turn the corner.  He was discussed for a role in the biting WW II drama King Rat (1965) which could’ve established his bona fides as a serious dramatic actor, but it didn’t happen.  A few years later he had another shot at a dramatic lead in the science fact thriller Marooned (1969), but that didn’t happen either.

West Side Story, King Rat, Marooned – the career corners that didn’t turn.  Most of the rest of his career – his last appearance was in the indie theatrical release The Still Life (2006) – was spent on television, working the gamut of what the medium had to offer:  sitcoms, dramas, miniseries, even a run on a daytime soap.  Occasionally, he would get a part that could remind one of what a more merciful industry might’ve allowed him to be.

To that point, I remember him as Charles Colson in the 1979 miniseries Blind Ambition, the small screen adaptation of John Dean’s book about his role in the Watergate scandal that brought down President Richard Nixon.  It’s a small part, but enough that you could see the acting chops which had landed him Riff twenty years before, only matured and more refined.

In an interview, he looked back on landing the role of Riff, a part for which he’d initially been rejected because he was considered “too good-looking.”  A year after getting passed over, the show’s director/choreographer Jerome Robbins called him in to audition again:

“I…did my song and dance, and I heard from the back Robbins’ voice saying, ‘Can you do a backflip?’ I just threw a backflip, got lucky, and it worked out.”

And it did because while everything that Michael Callan should’ve gotten out of show business didn’t go his way, in a business that’s unfair and brutal on its best day, surviving is sometimes as valuable as an Oscar win.  And like Angela Lansbury, he did give us our moments of joy and laughter and even a tear or two.