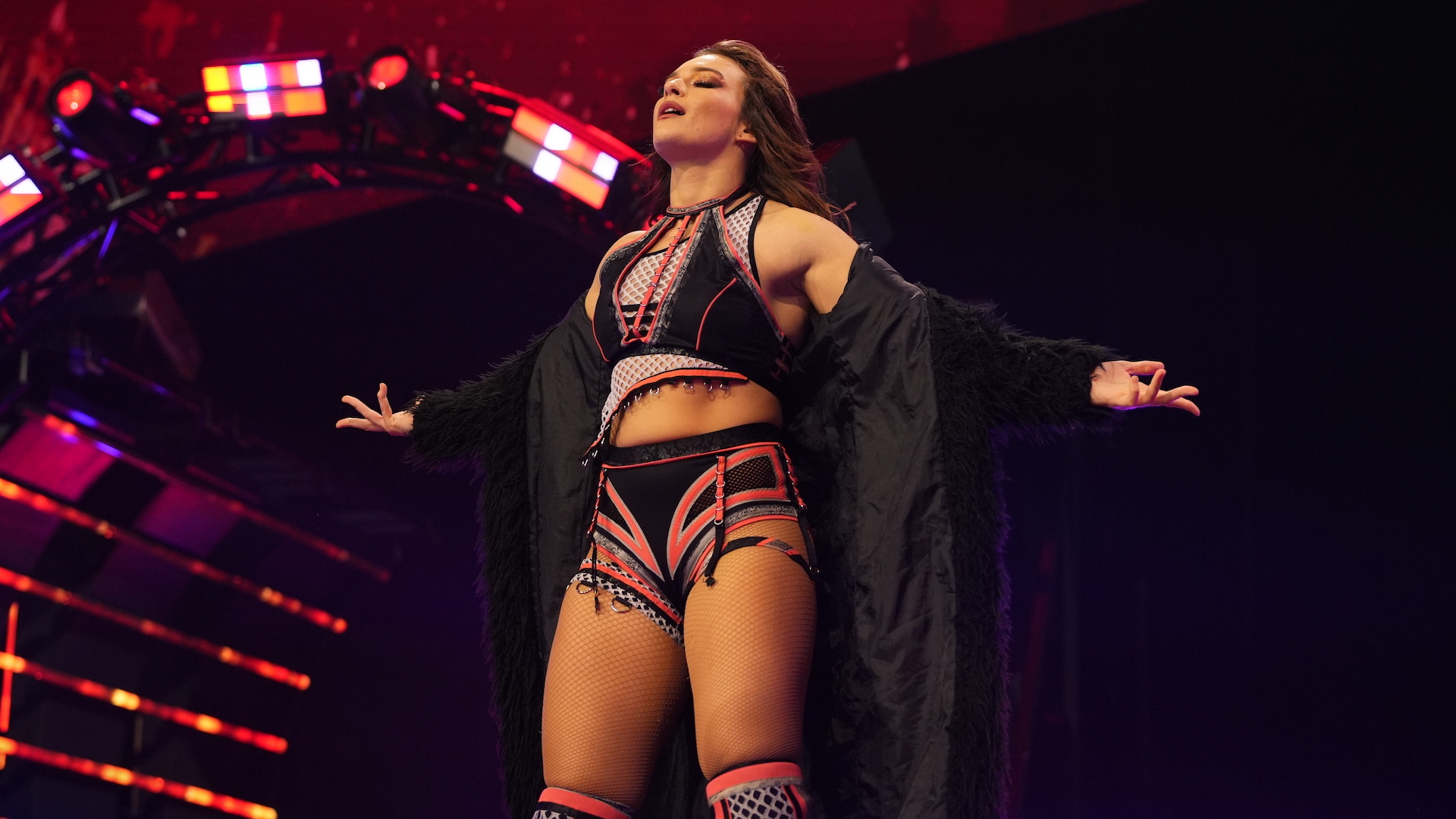 In a previous article, I wrote about changes in AEW’s developing women’s division stemming from Britt Baker’s 2021 title reign. Roster depth and a lack of onscreen presence have been one of the division’s major weaknesses. But with the organic rise of Jamie Hayter, along with more women prominently featured on TV than in past years, it’s fair to say the division has come a long way in 2022. It seems we’ve reached a point where we might say, it’s in a healthy spot now.

One glaring problem that plagued the division with Britt Baker at the helm was one-sided promos. It happening for as long as it did, with little threat of her ever dropping the title with Team D.M.D. ringside, meant Baker was untouchable twice. Not just while she was champion — after all, interference can be neutralized, and anyone can be beaten.

She was going to be untouchable because battles on the mic are always one-on-one, and very few came close. Enter Saraya.

I’m not going to sit here and say Saraya has better timing or is more consistent on the mic than Baker. But with Saraya’s greater pro wrestling experience — never mind the retirement and the injuries — she isn’t going to fold to the doctor, regardless of how the latter is positioned in the promotion. Thunder Rosa may be Baker’s spirit rival, earning her most career-defining wins at Baker’s expense. But no one has consistently put the doctor in her place like Saraya.

Foils help define characters, and defined characters inspire conflict. A foil can simply be someone who brings out a specific dynamic/side in others. Like a House of Black, an Orange Cassidy, an MJF, an Eddie Kingston, etc. From the original 2019 roster, we had Britt Baker the entitled snarky dentist, and the first female wrestler signed to AEW. Then, maybe Hikaru Shida, who represents fighting with honor and inner fire, and exhibits bullying tendencies toward those without either of them. Then maybe, maybe Riho, who is a foil to anyone who isn’t 100 pounds.

Through time, many more personalities have been fleshed out. Jade Cargill is #ThatBitch who is naturally dominant in the ring, and has crossover appeal through fashion and fitness to boot. Tay Melo and Anna Jay (under J.A.S.) proudly wave the sports-entertainment flag and are anti-pure wrestling. Julia Hart appears from the darkness and fights to honor the House of Black. Saraya is a returning pro wrestling veteran who knows she’s untouchable. Any combination of these personalities would make compelling extended rivalries.

When foils meet their perfect match, a rivalry starts to look like a bond. The pair are their best selves against each other, and revisiting matches becomes, more than inevitable, welcomed. Baker and Rosa put the women’s division in the main event in a convincing fashion. Shida and Serena Deeb bring out the killer in each other with their shared need to prove their technical superiority. Toni Storm and Jamie Hayter complement each other in the ring like they complement each other on promos. With a healthy crop of new additions to the roster this year, there are still so many more promising rivalries to look forward to.

It’s one thing to get great representation on Dark or Elevation, or even a standout TV match. But on PPV events especially, where no limit on the number of women’s matches exists, match quality is vital. On these events, women’s matches have the most to lose because if those matches are forgettable, with there being 2-3 of them, the weird and perplexing idea that there should be a one-match-per-episode cap for the division is only reinforced.

This is what the division is constantly up against, and where PPV matches lately have been succeeding at. Rosa and Deeb had a well-received technical clash at Double or Nothing centered around mutual respect. Rosa and Storm had an aggressive, fiery match at Forbidden Door but with a similar amicable air. Then, with Rosa finding herself injured, there was the All Out four-way between Storm, Shida, Hayter, and Baker to crown an interim champion. This match elevated 4 women, had great story development, and in the end, served to crown Storm champion.

Two takeaways from this: (1) Toni Storm has been maybe the best signing of 2022; and (2) Maybe the women’s main event scene is perfectly fine without the insider poo-poo onscreen.

Finally, an easy-to-spot sign of a healthy division is having a number of highly-anticipated big matches. And AEW isn’t short on those. The first that comes to mind is Britt Baker v Jade Cargill, a clash between two of AEW’s most marketable, arguably most dominant figures on the entire roster. Up until the injury before All Out, Kris Statlander seemed poised for a collision with Cargill, with many believing this to be the biggest threat to the latter’s streak and TBS Championship reign. Then, there is the always looming idea of Baker v Hayter, which, if the latter’s patience one day runs out, could happen sooner rather than later. Who knows?

Overall, I think this roster is about 5 key people away from being fully-formed. Outside factors impose a limit on the division, but I’m not going to discount this current period as a time no different from before. Don’t hate the player, after all.