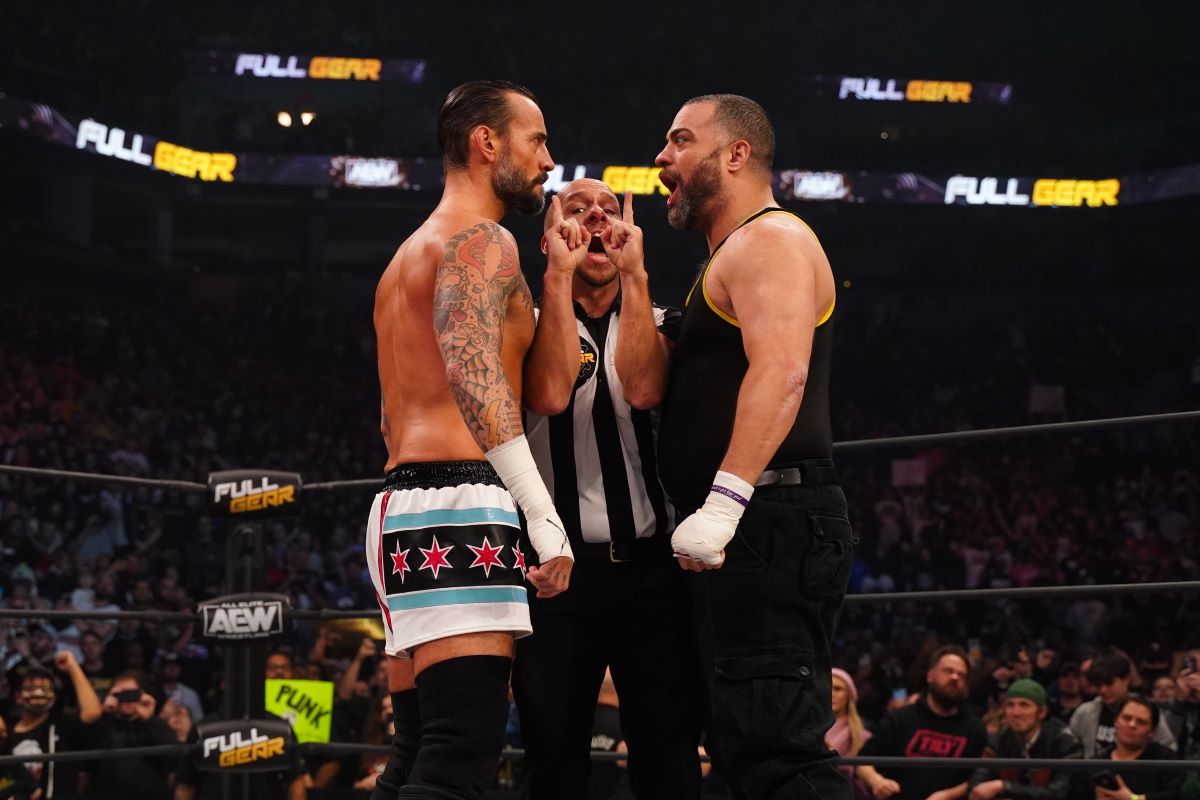 Over the past two and a half years, AEW has consistently put on some of the best wrestling matches worldwide. It’s incredible what Tony Khan and his team have accomplished in such a short span of time especially when working with mostly young stars. Of course, over the past 365 days, AEW has expanded its roster and added some talented veterans including CM Punk, Brian Danielson, and Adam Cole who have helped push the envelope and improve the product even more. With so much talent and so many matches to choose from, it was hard to narrow it down to just twenty. What follows are the five best AEW pay-per-view matches of 2021.

Editor’s Note: In case you missed it, this is the second half of a two-part list focusing on pay-per-view matches. Click here for the first half of the list which features the best AEW matches from Dynamite and Rampage this year.

This was the first multi-man AEW World Title Match and if you ask me, it was a giant success. Kenny Omega entered Double or Nothing as the Impact, TNA, AAA Grand, and AEW world champion, and because of this, I don’t think anyone expected him to lose that night. Yet despite the obvious outcome, there were plenty of near falls that nearly convinced fans he might, no thanks to fan-favourite Orange Cassidy who squeezed every ounce of hope from the fans who were desperately hoping he could pull off a win.

4. Hangman Adam Page vs Brian Cage
AEW Double Or Nothing (May 30th)

Double or Nothing was the first AEW event in 2021 to bring back a full crowd and boy was it electric! Riding high on the emotions of the live fans, Hangman Adam Page and Brian Cage delivered what I think is the most underrated match of the year. From the opening to the closing bell, it was a high flying and hard-hitting physical match that saw both men throw everything they had at each other until the unwanted interference by Hook and Ricky Starks cost Cage the match and allowed the Anxious Millennial Cowboy to grab the win via his classic Buckshot Lariat. It’s too bad AEW hasn’t used Brian Cage more. He clearly is one of the most talented men on the roster and along with his match again Darby Allin (Also on this list), he’s proved he could go toe-to-toe with the best and exceed everyone’s expectations.

AEW Full Gear 2021 is best remembered as the night “Hangman” Adam Page realized his dream when becoming the AEW world heavyweight championship by defeating his former best friend Kenny Omega in the main event— but it was the match between two of the four pillars that left the biggest impression on most wrestling fans.

While MJF had been praised for his exceptional skills on the mic, some questioned whether his work in the ring could match. Well, I think it’s safe to say that Maxwell Jacob Friedman answered those critics and set the bar high for every other match that followed that night. His match with Darby Allin really caught me off guard with how good it was, most notably the nonstop back and forth opening grappling sequence which set up a showdown where Allin needed to find ways to reverse several near-pinfalls while beneath the bigger and stronger MJF. Other highlights included a typical Darby suicide dive; a second-rope stunner by Allin; a tombstone piledriver by MJF on the edge of the ring apron; and a Code Red reversed by MJF into another powerbomb.

But what made this match great wasn’t so much the insane bumps and crazy spots but rather the story unfolding in the squared circle. MJF was trying to prove that Allin couldn’t hold a candle to him in the ring and Allin was trying to prove that he could keep up, and he could also beat him. And then of course there was another story that would play out later as MJF promised he could beat Allin with a side headlock and that he did.

Of all the AEW matches this past year, there was no other match in which the opponents were as emotionally fired-up as CM Punk and Eddie Kingston at Full Gear. Before the ref could even call for the bell, Kingston hammered Punk with an unexpected massive backfist so hard, it sent Punk right down to the mat. Without delay, the match could have been over, but Eddie wasn’t interested in a win; he was out for blood.

This ended up being a straight-up brawl that left much of the crowd cheering for the Mad King thanks to his phenomenal column published in The Players’ Tribune earlier that week. It was full of so much emotion and raw intensity that I couldn’t take my eyes off the match, and neither could the crowd who nearly booed Punk out of the building. The blood, the hard slaps, the trash-talking and the five-knuckle shuffle setup (a callback to Punk’s WWE rivalry with John Cena) made this all worth the price of admission. And there was so much more to love too, such as Punk hitting the Three Amigos in honor of the late Eddie Guerrero and Punk and Kingston meeting in the middle of the ring with fists and middle fingers high up in the air. Overall, a solid match with excellent storytelling between two of the absolute best working today.

The Lucha Bros defeated The Young Bucks inside a steel cage to win the AEW Tag Team Championship in easily the best tag team bout of the year. The action was fast, furious, and what made it even more impressive was how all four men kept the crowd invested in every single second of the match with some truly innovative offense. For the most part, the Bucks dominated the action using a wide variety of moves to keep Penta and Fenix from getting the upper hand but eventually, Fenix would mount a courageous comeback and jump off the top of the cage onto the Young Bucks before he and his brother hit their tag finisher for the win.

As expected, this match featured highly flying action including a pair of stereo package piledrivers on the ring apron; a diving stomp into a Fear Factor piledriver and the aforementioned crossbody dive off the top of the cage. But amidst all the blood and carnage, this match also had a ton of heart. And there was a story being told. This was, after all, the long-anticipated rematch from All Out 2019 and it also marked the first time the Lucha Bros. won the titles. Everything from their extravagant entrance to watching them celebrate with family and friends post-match, made the Lucha Bros. even more likable, especially since the Bucks attempted to dishonor their opponents by ripping off their masks. The image of crimson-masked Penta protecting his young brother is something few wrestling fans will soon forget.

In the end, the Bucks pulled out every trick they could, resorting to the underhanded tactics but it simply wasn’t enough to squash the spirit, heart, and determination of their opponents. Honestly, the Steel Cage Match from All Out was so full of emotion, it’s a match you can’t in any way effectively recap. Words just wouldn’t do it justice. It needs to be seen, to be believed.