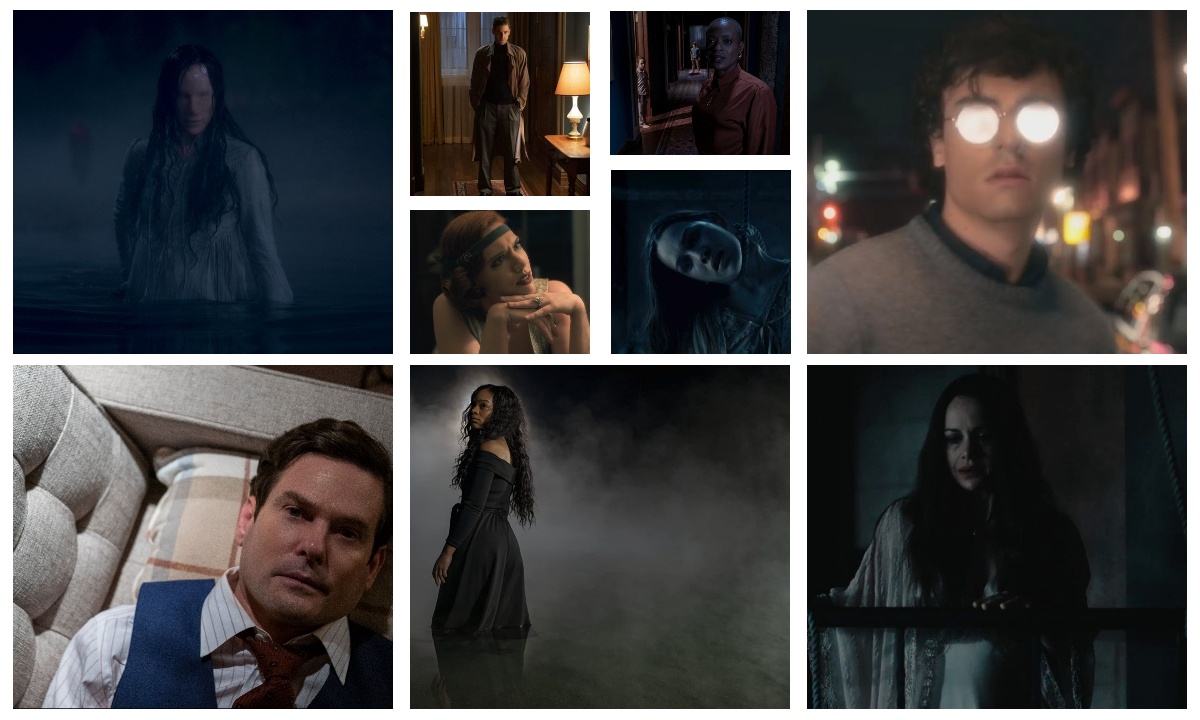 The Haunting Series: Ranking All the Ghosts

Created by Mike Flanagan The Haunting of Hill House and its follow-up series The Haunting of Bly Manor are terrifying shows packed to the brim with unsettling atmosphere and unexpected horror. Although both shows follow a family trying to survive a very haunted house, each of the shows is exceptionally different in its approach. While The Haunting of Hill House views like straight horror, The Haunting of Bly Manor is more of a tragic romance (where everyone is killed and forgotten). With so many ghosts spread out across the two series, and with many of the same actors being cast in both shows, we thought it would be a good idea to break down the nine best ghosts of these Haunting series.

Although Henry Wingrave (Henry Thomas) isn’t haunted by a literal ghost—instead he’s being tormented by an evil, imagined, doppelganger—he’s still a man who’s very much haunted by his bad choices and deepest regrets. Henry’s banished from his family after his brother, Dominic (Matthew Holness), finds out that he had an affair with his wife, Charlotte (Alex Essoe), which resulted in the birth of their daughter Flora (Amelie Bea Smith). Dominic ends up confronting Henry before leaving with Charlotte for a second honeymoon which he hopes will strengthen their marriage, but which results in the two of them dying in an accident. Before he leaves he tells Henry, “And yourself, Henry, your real self, he’s an evil shit. A grotesque little demon, isn’t he? I pity you, ’cause you have to live with him. You have to live with yourself. And he’s a shit, grinning, f*cking monster, isn’t he?” And, as Henry can confirm, he really is.

Considered to be the personification of Hill House’s evil, Poppy Hill (Katie Parker) is one of the home’s original spectres. Often spotted in a green flapper dress, Poppy is clinically insane and even met her husband William (Fedor Steer) in an asylum. She’s a mother of two, although both her kids died in the house, and she’s often shown bonding with Olivia Crain (Carla Gugino). Poppy’s also attributed to being the force that convinces Olivia that, to protect her children from the danger of the real world, she needs to kill them when they’re children so she can keep them with her in Hill House forever. Yikes.

7. Edmund – The Haunting of Bly Manor

Edmund (Roby Attal) is the deceased fiance of Dani (Victoria Pedretti), who’s loved her since childhood in the newest of Mike Flanagan’s shows. Friends turned lovers, Edmund is excited to spend the rest of his life with Dani. Little does he know that it’s going to come to an abrupt end when he gets hit by a truck as he steps out of his car, with Dani watching everything from the passenger’s seat. Unfortunately for Dani, Edmund dies only moments after she confesses to him that she no longer wants to marry him (and, truthfully, never did). Dani’s guilt haunts her throughout the show, and her guilt looks astoundingly like her last memory of Edmund: shrouded in darkness except for his glasses, which were illuminated by the headlights on the truck.

6. Viola Lloyd/The Lady in the Lake – The Haunting of Bly Manor

Houses don’t become evil places of their own accord. Much like Hill House became an epicentre for paranormal activity and malevolent spirits thanks to the suicide of Jacob Hill, so too did Bly Manor with the passing of Viola Lloyd (Kate Siegel). Born in 1645, Viola and her sister, Perdita (Katie Parker) were the sole owners of Bly Manor after their father’s passing, and so Viola married their cousin, Arthur (Martin McCreadie), in a business-like move to keep the manor. Viola ends up falling in love with him and has a daughter, Isabel (Zoë Noelle Baker), but it’s not long before Viola is sick with “the lung” (which, based on their depiction of it, seems like tuberculosis). Perdita, who’s developed feelings for Arthur over the five years that Viola had been bed-ridden, ends up smothering her sister. Unfortunately for everyone at Bly Manor, Viola refuses to accept her fate and her soul remains locked up on the property, turning the entire estate into a “gravity well,” and forcing the ghosts of the deceased to remain trapped on the grounds with her. As time moves on without her, Viola eventually forgets everything that made her her and becomes the Lady in the Lake (she also develops a nasty habit of killing anyone who mistakenly crosses paths with her).

The right-hand man to Henry Wingrave, Peter Quint (Olive Jackson-Cohen) is one of the many antagonists of The Haunting of Bly Manor. Obsessed with getting ahead in life and making something of himself in an attempt to forget where he came from, Peter is eventually blackmailed by his abusive parents to steal from Henry Wingrave. Self-possessed and determined, Peter ends up stealing a substantial fortune from Henry. He also hires and falls in love with the Bly Manor Governess, Rebecca Jessel (Tahirah Sharif), and convinces her to run away with him. Unfortunately, the night before the two are set to run away, Peter is killed by the Lady in the Lake, his body dragged into the waters with her, and his soul trapped on the estate property. Despite his bad choices and villainous behaviour towards the series’ end, you can’t help but sympathize with Peter.

Smart, ambitious, and tragic are just some of the ways to describe the incredible first Governess of Bly Manor. After excelling academically at university, Rebecca Jessel takes a job working with the children of Bly Manor. Although it has nothing to do with the barrister job she eventually wants to get, she strategically applies for the post hoping that she can circumvent having to apply for internships with potentially predatory lawyers and can, instead, prove her cleverness to Henry Wingrave while caring for Flora and Miles (Benjamin Evan Ainsworth) so she can work with him. Unfortunately for her, she falls in love with Peter Quint who, in a desperate attempt to not be alone, possesses her body and drowns her in the Bly Manor lake. Despite the tragedy that befalls her and the potential future of being trapped in Bly forever, Miss Jessel proves herself to be a hero and tries to save Flora and Miles from a fate worse than death at the end of the series.

A woman emblematic of what it means when love and fear become too much, Olivia is the tragic matriarch of the Crain family, whose death breaks the family apart. She and her husband, Hugh Crain (Henry Thomas and Timothy Hutton), flip houses for a living, and so they move into Hill House along with their five children. While Olivia was hoping to renovate the home for only a short time, the house has other ideas and begins to drive her mad. Poppy Hill also gets her hooks into Olivia and begins convincing her that the only way to truly save her children from the threat of the world is to kill them. Olivia ends up serving poisoned tea to her two youngest children (who thankfully don’t drink it) and their friend (who sadly does). Later that night, at the height of her breakdown, she throws herself off a three-story spiral staircase to her death within the house, with her final words being “I want to wake up, so badly. Why can’t I wake up?”

One of the saddest character arcs in either series, Nell Crain (Violet McGraw Victoria Pedretti) is the twin brother of Luke (Julian Hilliard and Oliver Jackson-Cohen). A curious girl with a powerful connection to her brother, she’s haunted throughout the show by a ghost known only as the Bent-Neck Lady. This ghost is present throughout the most traumatic moments of her life: her time at Hill House, the death of her husband, buying heroin for her brother, and just before she decides to confront her past at Hill House (an exercise suggested to her by her therapist). Her return to the home proves to be a tragic one that ends with her putting a noose around her neck and Olivia seemingly giving her a final push from the same staircase where she had died decades earlier. Much to Nell’s horror, her neck snaps and is bent at an extreme angle, and we see as her ghost drops through time, showing us that Nell’s future self was, and has always been, the Bent-Neck Lady. Although she’s trapped in Hill House with her mother (and eventually her father) forever, she does make a final appearance at the end of the season to compare time to confetti, and to save her brother one last time. Her character asks audiences to consider if we make our fate, or if it’s something inescapable.

Arguably the strongest character in either of the Haunting shows, Hannah Grose (T’Nia Miller) is a force of nature. Kind, gentle, and powerful, Hannah seems like more of an authority at Bly Manor than Henry Wingrave himself. Although she originally lived in town, she accepts a live-in position at the manor after finding out that her husband is having an affair and leaves her. Throughout the series we see her develop feelings for the cook, Owen (Rahul Kohli), stand up for what she knows to be right, and overcome fear to save those she loves. Her story is also one that, like most of the characters on this list, ends in tragedy. After catching Miles speaking to the ghost of Peter Quint, Peter possesses the boy and forces him to push Hannah down a well, killing her. Her ghost appears standing at the edge of the well, looking down, before meeting Dani for the first time. We soon realize that Hannah doesn’t know she’s dead, although she still finds herself occasionally slipping off into her memories, and Peter eventually takes her to the well and shows her her body. Despite her trauma, Hannah still forces herself to fight for the children of Bly Manor and the lives of those she loves. She’s emblematic of strength, vulnerability, and what it means to have faith in ourselves.

Top 7 of the Best Soap Operas

How does Netflix’s new ‘Rebecca’ stack up against the Hitchcock classic?