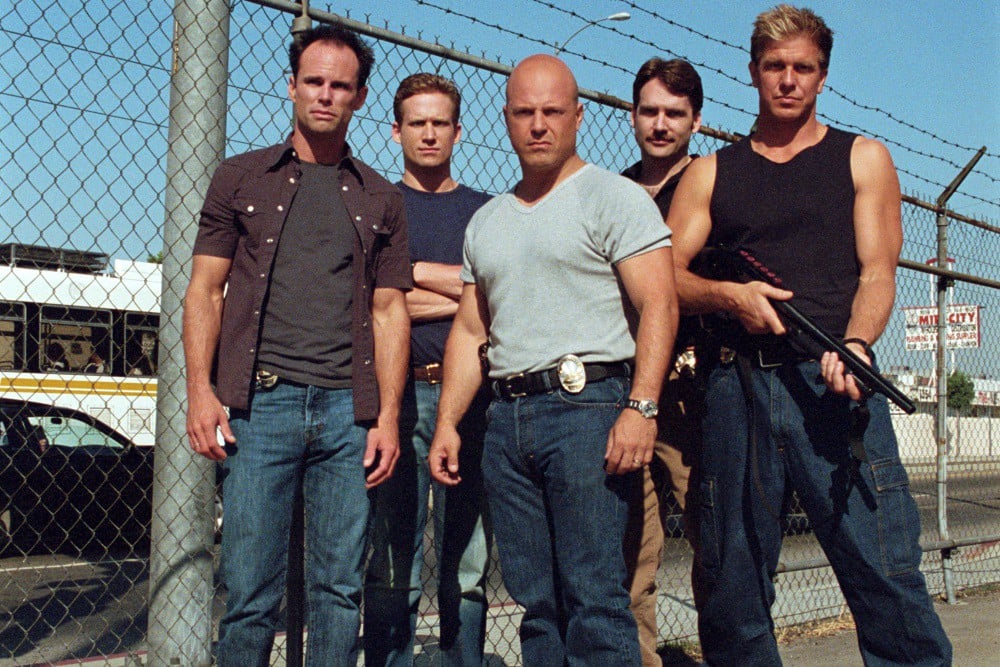 After a complete rebranding in 1997, FX turned into a channel without identity, more a virtual dumpsite for Fox television and film properties than a cable network. They ran reruns of Buffy the Vampire Slayer and Married… with Children – so when they stepped into the original dramatic programming ring in 2002 with The Shield, it was a bit of a surprise. TNT had dipped its feet into original programming in the late 1990s (most notably with a Babylon 5 revival and 2001’s hit series Witchblade), but AMC didn’t exist in its current incarnation yet, and HBO was just starting to gain traction with Oz, The Sopranos, and Sex and the City… it was an interesting time in television history, and there’s no doubting The Shield’s role in it all.

Directed by Clark Johnson (yes, that Clark Johnson) and written by creator/EP Shawn Ryan, The Shield‘s pilot immediately established itself as a different kind of cop show (the show’s most quoted line of dialogue in the pilot is always a reminder to the audience that things are different here). The Shield was brutal, in-your-face television, one that was willing to take off the slick detective sunglasses and look at the dirtiness underneath, centered on a semi-corrupt task force (working out of a district housed in an abandoned church, no less) in Farmington, California. A premise crazy enough to be based in real fact, The Shield introduced us to Vic Mackey, a person perfectly willing to rip the drugs off a dealer, arrest him for being a dirtbag, then turn around and sell the drugs to his biggest competitor. A cowboy with a badge and license to kill, “Pilot” firmly places its titular character in the gray area between law and criminal, painting around him a backdrop of complex, interesting characters who struggle to embrace their own darkness in the wholehearted, kamikaze way Mackey does.

Just think about how attached to the other characters of The Shield over its 88 episodes – all of those things are fostered in the show’s first hour, a testament to how well the show was able to dive right into its overarching narrative with confidence in who these people were. There’s the morally righteous Claudette Wyms (an always-terrific CCH Pounder), the insecure, cocky Detective Dutch Wagenbach (one of TV’s most underrated characters of all-time; I have a soft spot for that mushy asshole), the upstart, conveniently minority police captain David Acevada, Danny, Julien… from the start, The Shield painting an intricate mosaic of supporting players who struggled with embracing the dark unknown, an area Vic Mackey consistently made his bitch, a downward spiral into sociopathic evil that begins in the final minutes of the pilot – an infamous moment that not only grabbed my attention as a viewer but remains one of my favorite surprise twists in television history.

It’s really a genius bit, playing on the assumptions we have as Americans about a police show: while there are complex characters to be found on the hundreds of network police procedurals, none of them came close to the dark, intricate caverns of Vic’s morality. A man who will do anything to protect his children, Vic beats the shit out of a naked drug dealer, and assaults a (pedophile) doctor with a phone book after accusing him of not wanting to fuck his teenage daughter: we’ve all seen police characters who “step out of line” to get justice – while Mackey’s actions can be construed as such, the final moments of the pilot flip these around to reveal them as something completely different. All cop shows force their characters to shoot a perp at some point to challenge their morality: no other cop show had a cop murder another cop, in order to cover up a drug deal with an accomplice feeding them drug money from off the streets (making sure they get their cut to keep the peace and everyone out of prison, one of many parallels to HBO’s signature mobster series).

Those final moments are sadistic, magic bits of television: the whole pilot sets up a season-long story where Terry Crowley gets in close with Vic only to turn on him at the last minute. But driven by personal gain, we’ll do desperate things: Terry will make a deal with the feds (a deal Acevada pushes him into for his own political aspirations) in order to further his career – and Vic will kill to protect his, establishing an entirely new set of rules and morality clauses for the show to follow over the next seven years, with stolen money trains, life-threatening beef with the Armenian mob, and a crumbling family of brothers at the show’s always-decaying heart, burying Vic and the rest of the Strike Team in shit pile after shit pile for eighty-plus hours.

But for the entire series, the death of Terry Crowley hangs over Vic’s head: it always defines his relationship with Acevada, remains an important connection between him and his reckless number two Shane Vandrell (Walton Goggins at his very best, let’s not forget) over the years. It’s their shared secret (along with Lem and Ronnie, two minor characters in early seasons who would play huge roles on the ultimate battle between good and evil for Vic’s soul), the biggest skeleton in their closet. It affects everything in the series, right down to the final moments when Vic’s entire career (and the free life of his beloved Strike Team buddies) is on the line – not only is Crowley’s murder at the end of “Pilot” an amazing “surprise” moment, but it’s one of the most significant character deaths in TV history – and it happens in the first episode, one of many storylines in the first episode that would remain central (and more importantly, always interesting) to the show over its wildly successful run.

That’s ballsy: and over The Shield‘s run, that adjective would come to describe the show and FX’s approach to original programming: The Shield wasn’t afraid of depicting the pitfalls of gang violence and drug use on America’s forgotten ghettos, detailing the politicians exploiting it for their personal gain, at times questioning whether the police or the criminals were different at all, two groups willing to do whatever is necessary to protect and further themselves. Meaner, darker, and more contemplative than the average cop show (and packed with creative talent, from Ryan to Kurt Sutter and Glen Mazzarra), The Shield marked a true new Golden Age for television – and remains one of the standards for all cable shows (cop or otherwise) to be judged by in its wake.