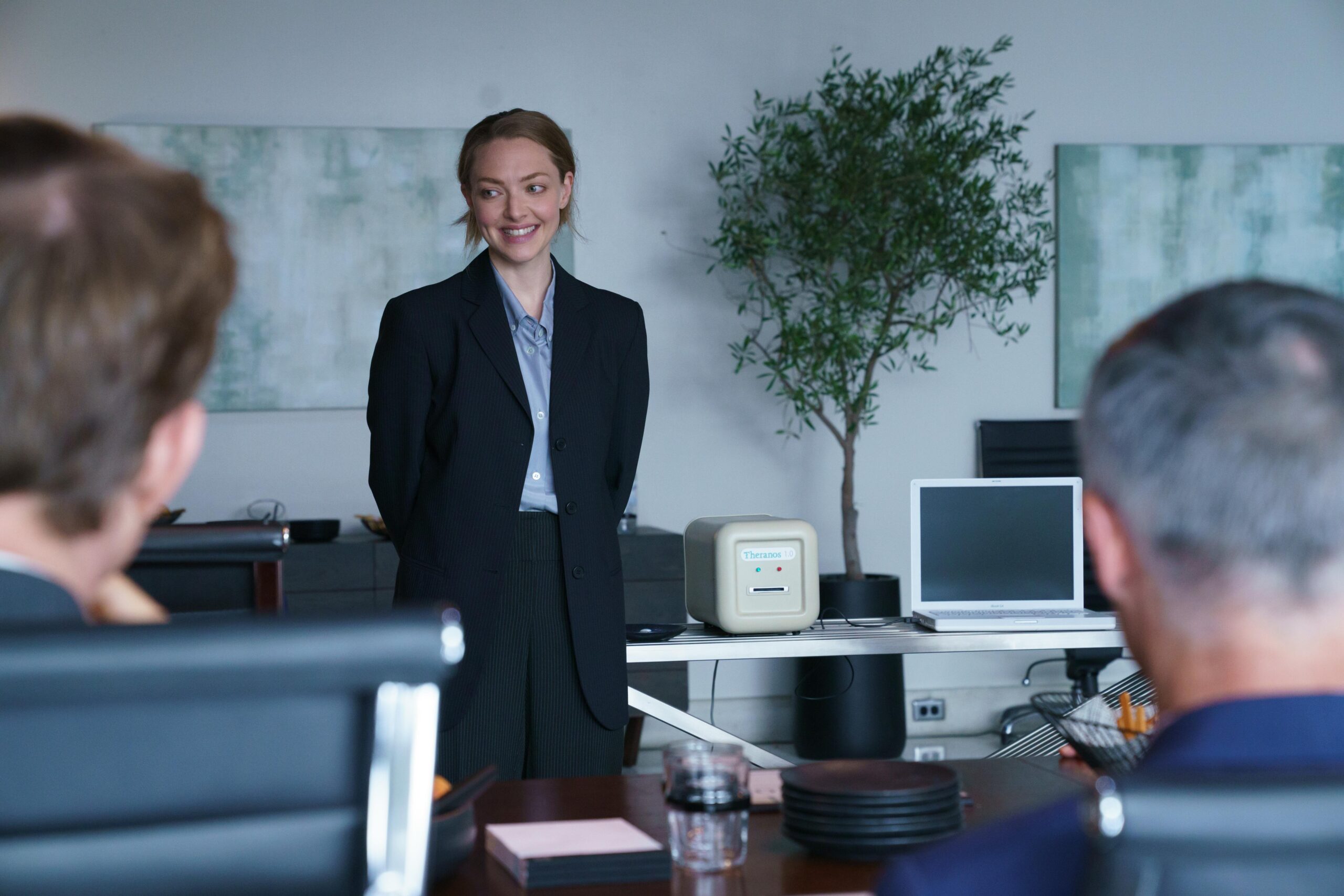 The Rise and Fall of Theranos

The Dropout cuts right to the heart of the Theranos medical device scam, allowing us to watch Elizabeth Holmes’ brazen actions, and wonder —along with everyone else since her crimes came to light— how she got away with it for so long.

Theranos founder Elizabeth Holmes’ (a dazzling performance by Amanda Seyfried) attempt to revolutionize the healthcare industry and become a billionaire, no matter the cost, is painted here in all its audacious, twisted glory. The Dropout presents the Elizabeth Holmes case as it is: perplexing, shocking, but somehow sliding carefully along the edges of something we feel we can nearly grasp onto the “why” and “how” of. The Hulu show’s made the bold, brilliant choice not to point the audience directly towards a particular opinion, cleverly interspersing voice-overs listing Elizabeth’s crimes while we watch her in emotional moments; It’s all laid out from every angle, for us to decide for ourselves.

Whether you’ve only heard of Holmes’ fraud from news headlines, or have been following the triumph-turned-scam for years, this show will capture your attention and hold it. It’s the kind of entertainment that keeps you hoping the episode won’t end, while you’re also dying to talk about everything that just happened when it does.

The pacing is fantastic, offering beats of Elizabeth’s life in chronological order as is relevant to both her vision and the crimes, chapterized by footage from her 2017 questioning in court. Though the show does a wonderful job humanizing her, and exploring what she’s experienced, it never excuses her behavior.

To watch The Dropout is to know with absolute clarity that Elizabeth Holmes is a criminal who hurt people. But still, you wonder why. Where did it go wrong? When did she become like this? How did it all add up? It’s an impossible answer; We may never know the truth. The show certainly leans into that fact.

Compelling and convincing in its storytelling, we — the audience; society— are aware that we’ve been swept up by the same stories that Elizabeth Holmes has so thoroughly internalized: Steve Jobs, Bill Gates, Elon Musk; College dropouts who shaped the world with their singular vision of a new technology. “You don’t get to skip any steps. You have to do the work,” a female professor advises Elizabeth when she brings forward her first invention and it is deemed impossible: “I’m sorry your idea’s impossible, but that’s the way the world works.” Elizabeth counters that “The world works in certain ways until a great idea comes along and changes everything,” In that moment, we want to believe her. Because by then it’s evident that she’s always thought she is smarter than everyone in the room, and that sometimes she genuinely is.

To watch The Dropout is to know with absolute clarity that Elizabeth Holmes is a criminal who hurt people.

The show successfully alternates between this inspiring energy and the horrors of her actions creeping up on us; The certainty that her behavior is unethical looms over the fact that we’ve been conditioned to root for the underdog, expecting the unlikely hero to succeed by the end of their entrepreneurial journey. We enjoy scenes of an energized Elizabeth dancing around her office, alongside classic start-up moments of panicked racing between pitches in the search for financial backing.

The inevitable downfall is a slow-burn; We know it’s coming, but first The Dropout wants us invested in how Elizabeth builds it all up; It wants to make sure we know the people she’s pulled into her unrelenting orbit before she destroys them. Elizabeth Holmes is a conman, a businesswoman, a visionary, a fraud, a daughter, a neighbour, a reluctant but talented student. She’s a dreamer, a doer, and in the words of her idol Steve Jobs, she’s one of “the crazy ones, the misfits” who believes she’s unique and misunderstood enough to actually change the world.

Amanda Seyfried is astonishing as this Elizabeth Holmes, conveying all of her determination and ambition; the naivety of her youth coupled with her unyielding egotism. She’s savvy in one sense, but awkward in all the others: Wildly out of touch with the people around her, regularly seen practicing disjointed phrases in the mirror.

The Dropout captures with genius ease and humor, the very specific lack of clarity, the almost-almost of understanding Elizabeth’s motivations. We are witnesses to all the emotional complexities involved in her crime: the factors out of her control, and those pushing her along in the insanity of Silicon Valley.

We see the way the lab techs were inspired by her speeches, by her phenomenal vision, and how fiercely they believed in Theranos’ development at first. The tone of the show, though overall upbeat, manages to convey the catastrophe and frustration Elizabeth felt (and caused) on her journey towards what she deemed to be success.

The Dropout does not shy away from the darkness of Holmes’ traumatic past either. When Elizabeth tells her mother that she is “considering becoming sexually active” the summer before she goes to college, her mother responds with solemn caution asking Elizabeth be safe —not in terms of condoms, but of sexual assault and the terrors of male violence. “Boys aren’t always going to act like gentlemen,” she warns while Elizabeth is getting blood drawn for her trip to Beijing, “so it is up to you to protect yourself.”

The Dropout does not shy away from the darkness of Holmes’ traumatic past.

When Elizabeth is raped at Stanford, the college takes no disciplinary action because it’s her word against his, which discourages Elizabeth about her voice ever carrying weight. “I can’t get anyone to believe me,” she laments, and it’s heartbreaking in context. But her mother makes sure Elizabeth knows that she does believe her. “Men will take and take from you,” she says, in a galvanizing speech, “so you have to decide right now if you are going to let that stop you.” When Elizabeth asks how, she continues: “You just put it away, and forget it. And then one day… one day, you’ll just be fine again.” It’s equal parts empowering and haunting— which actually encapsulates the mood of the show.

The Dropout also delivers on the slow-burn suspicion of Holmes’ relationship with the much-older Sunny Balwani (played by Naveen Andrews with all the captivating, concerning behavior required), providing the origins of their relationship, right down to their first interaction when they meet in Beijing. It’s evident that there are many levels to the mutual attraction, not least the appeal of ambitious Elizabeth meeting a man who sold his company for $40 million: “I wanna help people, and I wanna be a billionaire. Like Steve Jobs.” Elizabeth tells Sunny on a bike ride. He responds simply: “You know what you want.” To which she says, “Thank you.” When he asks, “For what?” she clarifies: “For not laughing.” (We are later to assume that the story of Sunny’s father’s death serves at least partly as inspiration for the Elizabeth’s mission to eliminate the problem of doctor’s misdiagnosing their patients.)

All the guest stars portraying the side-characters to Elizabeth’s graceless endeavors are magnificent: Utkarsh Ambudkar as a cheerful lab tech and the occasional comedic relief; Nicky Edres as the designer who left Apple for Theranos and inspires Elizabeth’s wardrobe transformation; Michel Gill and Elizabeth Marvel as her parents, trying their absolute best; William H. Macy as her troublesome childhood neighbour, doing his worst; Laurie Metcalf as the professor who warns against Elizabeth’s plans from the start —to name but a few who appeared in the first three episodes.

I am pleased also to report that the show serves the expansive range of its audiences: The Dropout tells the Theranos story without leaving anyone new behind, while leaving room for a satisfying number of moments where Theranos know-it-alls like myself can speak up about the fun facts they’ve omitted at various points. Director Michael Showalter offers just enough beats of familiarity— the close-up fluorescent lighting of the HBO documentary; the green juice and voice drops; her particular wide-eyed pauses and phrasing in interviews— to hold everyone’s attention right from the start.

Veteran Theranos true crime followers will appreciate the focus on Ian Gibbons (played endearingly by Stephen Fry), who is too often glossed over (in both the real court case and previous depictions of this story) but whose life holds incredible weight to the evils of Elizabeth and Sunny. I’m eagerly anticipating Dylan Minnette’s role as the whistle-blower Tyler Schultz –also often absent in depictions of Elizabeth’s crimes– in the upcoming episodes. It’s a comforting surprise that we will be able to see The Dropout unfold with all the important roles in context.

Winning Time: A Rollicking, Ribald Look at the Showtime Lakers