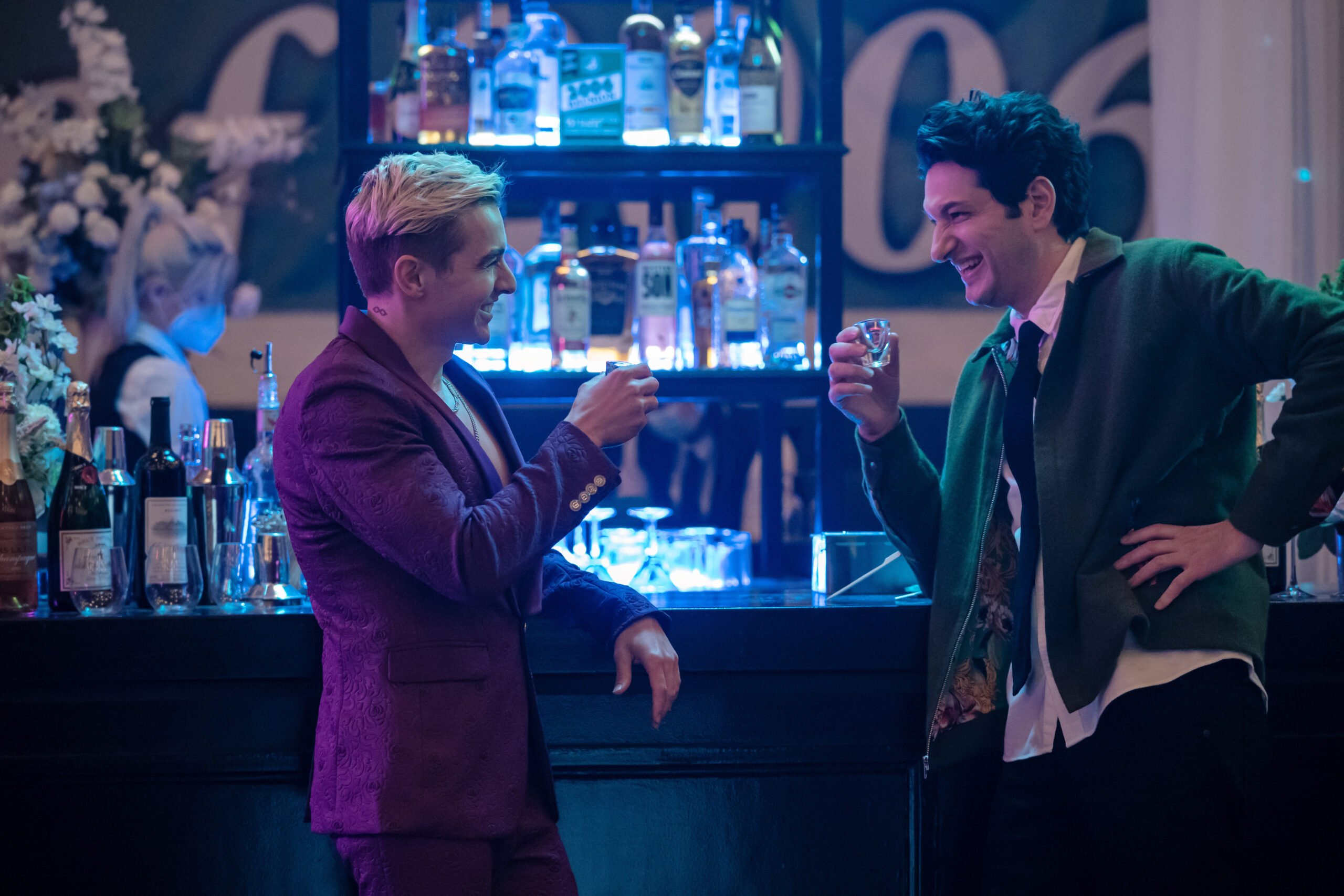 Who is the Killer in The After Party?

Note: This includes spoilers for episodes 1-3 of The Afterparty.

58 seconds into the first episode of The Afterparty, we watch mega-superstar Xavier (Dave Franco) screaming as he falls to his death. The detectives on the case are played Tiffany Haddish and John Early —where both actors are being their excellent, iconic selves! They’ve gotta solve this case by the end of the night, but we’ve got five weeks to play this guessing game that’s somehow deeply (and gloriously) rooted in how difficult it is to spell “diarrhea” correctly.

Xavier died during his high school reunion after-party held at his extravagant, ridiculously-decorated home, which, by the time detectives arrive, is absolutely dripping (wet, but also…) in evidence of a chaotic night. The show triumphs as a showcase of its cast of celebrated modern comedians as we know and love them, adding a freshness that endears them to us in new ways. Each episode presents the night of Xavier’s death a little differently depending on the perspective it’s told from, allowing the unreliable narrator aspect of the show to bleed right down into the genre choice.

But who is the murderer? These… are my theories (dun-dun)

Even poised as the first most likely suspect, knowing his previous roles, it’s hard to believe Sam Richardson a murderer. Richardson absolutely SHINES (and yes that shines does need to be in capital letters) as a romantic lead in this episode. —He is awkward, determined, adorable, and the banter between him and his crush, Zoe, is charming as hell. The Afterparty has them doing karaoke-song flirting, and Aniq’s wholesome rap edition of “My Neck, My Back” could rival Jimmy O. Yang’s reinvention of “Baby It’s Cold Outside” in Love Hard.

“Adorkable Lover Boy” aka “Mr. Scribble Face” did not murder Xavier, even by accident. And not just because it’s too easy that the murderer is the first suspect we meet. The real question I’m asking: Will Aniq, a professional escape room designer —who was right to be concerned and perplexed that the police detective couldn’t solve the escape room he created— solve this murder?

The answer is a) not without his friend Yasper’s help, because listening in through the A/V tech was a good plan, but it was Yasper’s idea and Aniq almost messed it up before Yasper rescued him. But b) Maybe not even with Yasper’s help, because how has Yasper literally written his own song in that bathroom while they’re trying to solve the clues, but neither of them guess that the “Revenge” note could be song lyrics. (The words even rhyme!) In conclusion, Sam Richardson blockbuster rom-com starring role when?

Before we get into whether or not Brett killed Xavier, it must be acknowledged how captivating and brilliant the scenes pitting Barinholtz’s Vin Diesel performance against Franco’s Xavier are. Brett’s incredible Fast & Furious-inspired episode is unforgettable —an instant classic for fans of the franchise— but the interactions between those two are cant-look-away hilarious. The homo-erotic energy of their “empty the tank” pee race; the polite wording of their showdown on the balcony is genius.

Now, the man who the detectives refer to as “Mr. Aggro” is certainly obnoxious, but a lot of the bite to his threats of death lose effect when it’s discovered how much of the night Aniq misheard. In revealing his openness to vulnerability and tenderness through his six-year-old daughter (the fantastic Everly Carganilla, who you may recognize as Sandra Oh’s daughter from The Chair) and the violence-is-not-the-answer awakening he had on the balcony with Xavier, The Afterparty makes it easy to believe Brett is not the murderer. Because “Family” you know? (Also logistics. But we’ll fully confirm when any other character’s POV also places him outside the house at the time of the fall.)

The supportive, enthusiastic sidekick to Aniq (How refreshing to have a white person be the quirky best friend for once!) has got tech skills, business plans, and a future to prepare for. He’s too sweet, too gentle, too focused on his dreams (which Xavier is a crucial part of achieving) to kill someone. He did not kill Xavier. He needs Xavier to bless his track!

When Yasper said “I’ve never seen anybody that small. A girl?!” after the crazed smile on his face while lowering his hand to the child’s height… I had to pause the show to absorb the moment. Schwartz is a master of unhinged hilarity. Sidenote: His musical episode’s parody of a Hamilton song reminded me of Harlem’s excellent “Get Out: The Musical” songs.

The Afterparty’s soundtrack is available to stream everywhere right now; It, unfortunately, does not include Xavier’s platinum hit “X Marks The G-Spot” (off the album “Somebody Xave Me”) which they definitely did record, but the endlessly hopeful “Yeah Sure Whatever” and “Three Dots from Stardom” will be playing on repeat.

“Uptight Artist Girl” has clearly got a lot going on underneath the pleasant vice-principal-slash-mural-artist exterior she’s presenting. Zoe’s lovely, but to have put up with this much from Brett for so long, there’s gotta be so much more to her. She’s obviously been feeling the ‘single and ready to mingle’ energy all night, but now she’s started acting shifty. Something about her doesn’t sit right. Even more now that Aniq told her about his diarrhea investigation game and she outsmarted him before he realized his mistake.

Chelsea’s got a revenge scheme set for the night, based on payback for whatever Xavier did to her in high school. (Desperately hoping there’s no sexual assault plot here.) She spiked her flask with something that messed Aniq up, and said nothing when he couldn’t figure out why he was feeling unwell —because she’s smart enough to not implicate herself before she even committed the crime she planned. (But is the flask really marked with an “X” for Xavier? She couldn’t have just used a plain sticker or something?) The beverage spilled onto Aniq at the reunion was too choreographed —What did she want to talk to Zoe about?

I vaguely suspect that Chelsea is the person Brett cheated on Zoe with. But everything about Chelsea’s behaviour makes me want to reserve judgment until I see the world from her perspective and establish what her agenda is. There’s something warped about the way everyone both sees and dismisses Chelsea. It’s too easy, too neatly packaged. (So far, it also feels like a waste of Glazer’s acting abilities, but time will tell. Her psychological thriller episode airs next.)

First of all, I don’t think that’s his real name. More importantly, I don’t think he went to their school. This guy is spending way too much time going around introducing himself to people and giving backstories no one recognizes. I’m not buying the whole “no one ever paid attention to me at school” sad story. But Demetriou’s quirky facial expressions are rewind-and-watch-that-back funny! They remind me of Succession’s Tom at his most awkward and misunderstood. Except that I don’t trust or support this dude at all.

From the way “Walt” runs to be first when Xavier arrives at the reunion, I suspect he may be a superfan who conned his way into the party for an up-close celeb encounter. Also suspicious: Why did he need the Wi-Fi password this deep into the night? Did Xavier deny him when he asked for it upon arrival? Had he been guessing that entire time? Then Xavier died and he just kept guessing until he got it right? This man’s presence concerns me.

Jenn 1 is suspicious from the start because she’s crying so loud and fake when the police arrive. She clearly likes to be in control, to have everyone’s attention and the right answer —but for someone giving ‘A-student with community-enrichment extramural activities’ vibes so loudly, what is she doing married to Ned? Literally, what does their life look like, I’m dying to know. Reserving judgment until we see more of their relationship playing out.

Ned is also suspicious to me because someone was clearly not “dropping a deuce” in the bathroom, so what was he hiding and who is he protecting? Why lie in that moment? Whose robe did the detective notice lying outside the bathroom door? I don’t put it past him —an adult married man who committed hard to a high-school stoner-level prank at a rich, famous person’s house —to have lied to the police over something stupid, but I need to know the truth before we can judge.

Indigo seems like a character that’s going to have too many random observations that are clouded by her “art-house” sensibilities and are simply not useful —as depicted by her dramatic mind-movie proving false in episode one. But why is she even at this party? She seems bored, and she “avoids screens” (Iconic). Is she looking for connections to promote her homemade human breastmilk cheese? Who did she arrive with? Did Xavier invite her?

Jenn 2 has given us nothing in three episodes besides simply standing next to Jenn 1. (Was the “do you work?” directed at Aniq meant to signify her as racist…?) Let’s see where the show takes her. Is she murdered now? When did she go missing? Am I tempted to re-watch all three episodes just to catch a glimpse of her somewhere standing in the corner so we have a last-seen timestamp? Yes, I am.

My strongest feeling about Jenn 2 is that I LOVE that her husband is seeing global success with his NBA-grade sneaker for dogs! And again, I love to see a white sidekick to a more prominent actor of colour.