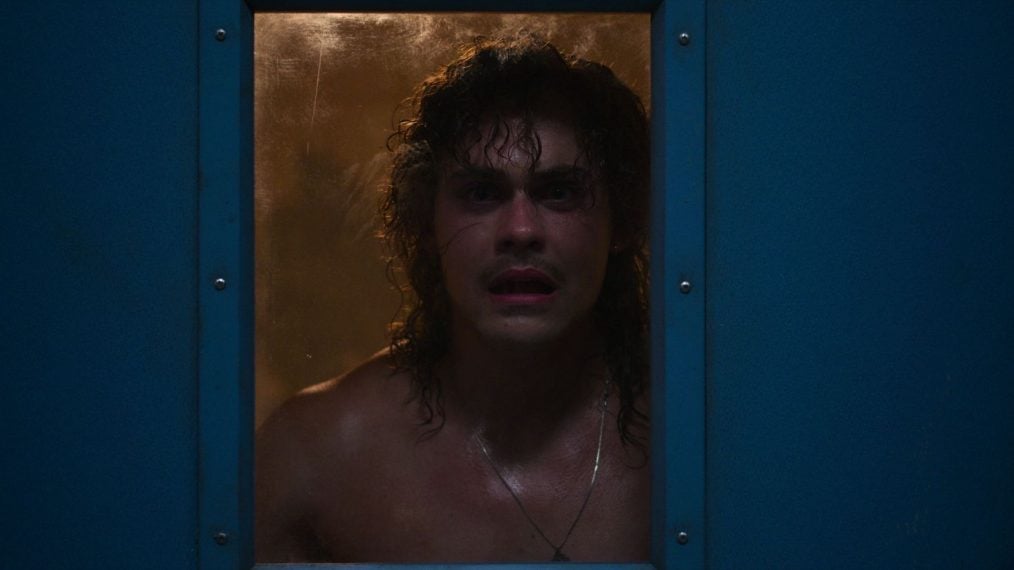 Like season one’s “The Body” and season two’s “Will the Wise,” “The Sauna Test” follows the now-established Fourth Episode rules of Stranger Things: a pair of important discoveries pull the season’s many plot threads closer together, unifying the larger narrative as it reaches its halfway point. While some might trigger this as a natural way for any drama to expand and contract over the course of a season, how Stranger Things does this, in particular, is fascinating: these fourth chapters often represent a larger shift in tone for the season itself, forming a clear demarcation from the fun, nostalgic 80’s hangout show into its grander ambitions as a supernatural YA horror series.

The explosive, exciting final act of “The Sauna Test” proffers hope for the second half of Stranger Things 3 to buck the trend of its predecessors, and finally, embrace its full potential as a series.

Of course, this often comes at a cost of its small-town storytelling, making these specific fourth chapters great barometers for the world-building and character work of the season so far, since it’s ostensibly the last “normal” episode before the Creature Feature elements begin to take over, and Stranger Things shifts to its more dramatically-formidable supernatural state. From that angle, “The Sauna Test” remains a rather mixed bag, so full of narrative twists it often feels like the smaller character bits are lost among the shadows of Hawkins’ abandoned steel mill – but an explosive, exciting final act proffers hope for the second half of Stranger Things 3 to buck the trend of its predecessors, and finally embrace its full potential as a series.

The many individual investigations of Hawkins come to a head in “The Sauna Test,” giving the hour a touch of thematic unity recent episodes have sorely lacked. It also gives everything a sense of momentum that’s been missing all season: from the Ice Cream Team’s discovery of a secret Russian bunker under the mall, to the reveal of The Mind Flayer’s growing shadow army, it feels like Stranger Things 3 is done playing coy, offering a number of connective threads between its mosaic of plot threads.

And not all of these moments exist strictly to serve plot: be it Will’s realization he’s still connected to The Mind Flayer, or the rampant abuse of power Hopper extracts on the town’s mayor (disturbingly paralleling “The Body,” when he beat the shit out of a state trooper for information), “The Sauna Test” has just enough moments of character to offer some intrigue beyond its foggy narrative, signs that the emotional anchors of the show haven’t been completely lost in the Upside Down.

These moments don’t exactly permeating every scene – Mike and El’s argument about their relationship isn’t exactly subtle, and ignores some of the more complicated implications of their behavior – but “The Sauna Test” makes a concerted effort to build out its larger themes and ideas of Stranger Things 3, often to great effect. The episode’s first act is probably the strongest of the season to this point: as Will, Mike, and Lucas put out their distress calls on the radio, Stranger Things 3 shows just how much things have changed between the group in the year since Bob Newby’s untimely death. Observing the new factions of the Ghostbusters crew and just how distant they’ve become in the last year captures the evocative nostalgia of childhood this show in a way the constant period references allude to, but are too infatuated with to channel effectively.

There’s really quite a sharp contrast of emotions offered in this short sequence of moments, driven by a reflective sadness on lost youth, the distinct feeling that things have fundamentally changed, and that they’re reaching the end of an era (besides the end of regular D&D session). There’s also the reluctant recognition that none of these characters could’ve grown emotionally or expanded their mind if the group hadn’t slowly drifted apart in the summer of ’85: we may not want to grow, but we’re often better for it, a simple, but powerful observation on friendships it often feels like Stranger Things is two steps away from evoking. For once, it feels like Stranger Things might offer itself the room to explore a more complicated relationship with nostalgia, embracing its dangerous fall backs and offering a more three-dimensional story than the contradictory reference porn/end of innocence juxtapositions it has relied on to this point.

For a brief moment, “The Sauna Test” captures a truth about childhood (and its end) in a surprisingly subtle way – and it resonates through the final twenty minutes of the hour, by far the most exciting and driven of Stranger Things 3. Led by the showdown between Not Billy/Eleven, and the Alien/Invasion of the Body Snatchers developments in the steel mill, “The Sauna Test” finishes an up and down hour with a remarkably moving series of events, culminating in the Star Court Mall storage room plummeting down to what we can assume is a secret Russian site of some sort – and of course, the reveal of the Flayer’s growing army.

The locker room fight scene is a particular highlight (despite Erica’s negotiating abilities nearly stealing the show), congregating our young adventurers at the public pool in an attempt to entrap Billy, and figure out what’s going on with him. Smartly, “The Sauna Test” takes its time developing the big scene, which finally explodes in an exciting crescendo of action, when the possessed Billy breaks out and El steps in to fight him. Though Dacre Montgomery’s performance has mostly coasted on his ability to channel Pure Asshole, “The Sauna Test” allows its least developed character to express a surprising (and slightly undeserved) amount of range: first heartbroken in a brief moment of clarity, then impressively intimidating when the Mind Flayer’s influence re-asserts itself. Montgomery manages to capture it all, begging the question of why this show’s given so little effort so far in bringing depth to his character.

Some of “The Sauna Test” still embodies some of the less desirable traits of the last few episodes, there’s a thematic richness to the fourth chapter of Stranger Things 3 offering hope for the second half of the season, as the pieces of its homage-laden puzzle draw closer and closer together. And in isolation, it’s a rather effective litmus test of what is and isn’t working so far this season, the struggles of earlier entries only giving greater context to just how effective much of this fourth chapter is.

A Week in the Canyon: 10 Takeaways from ‘Apex Legends’ Season 2