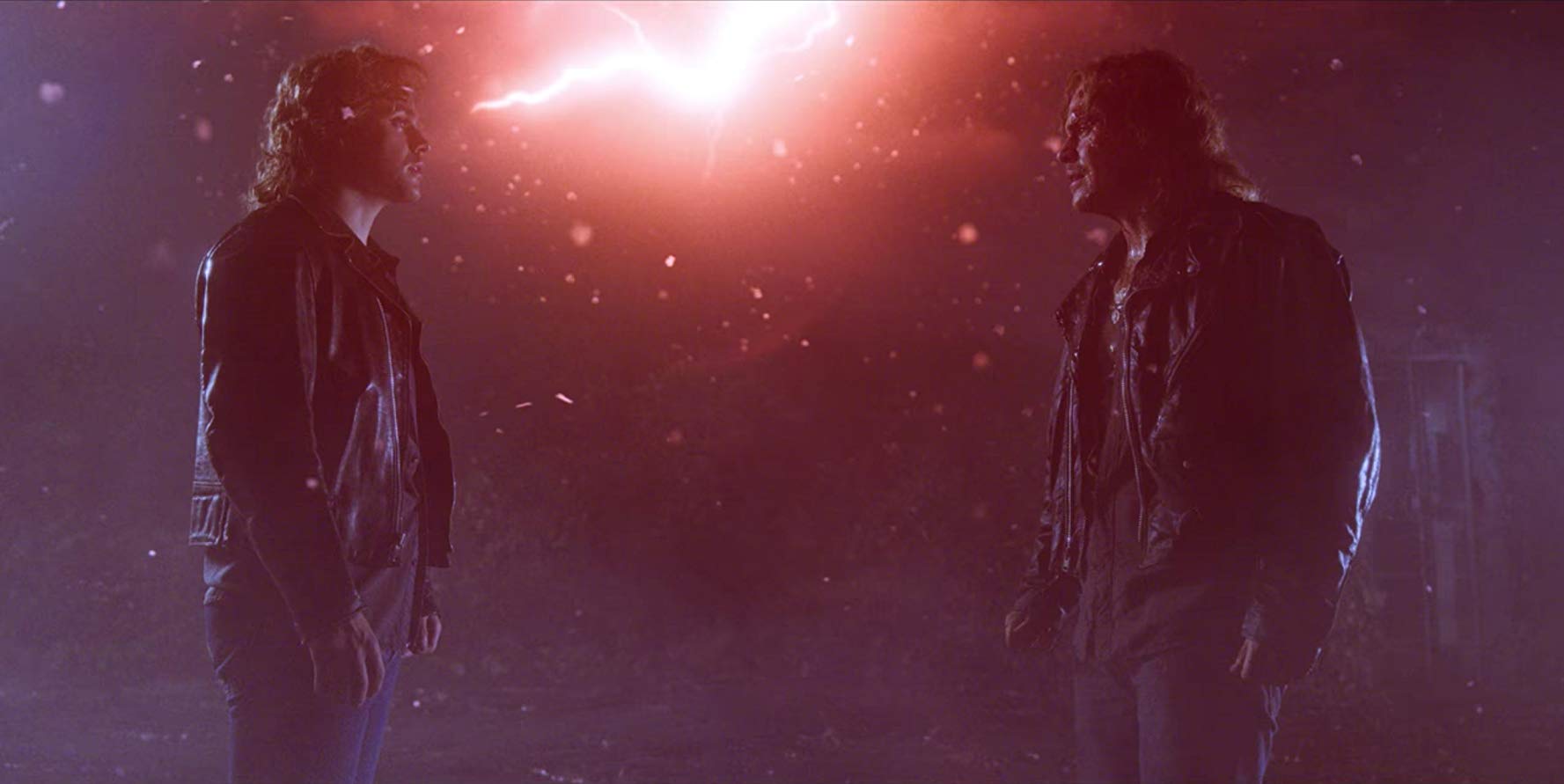 Between the exploding rats, ominous Russian scientists, and failing magnetic fields, shit is already going down in Hawkins in “The Mall Rats,” Stranger Things 3‘s montage-laden second episode. And that’s only the tip of the iceberg: there’s a pack of rioting locals,  a semi-possessed lifeguard, and a lot of hormones flying around the Space Court Mall – just in terms of sheer plot, “The Mall Rats” might be the single busiest hour of the series. But with a careful cinematic touch and a lot of fantastic montages, “The Mall Rats” manages to stay afloat in the Sea of Vague Narrative, in one of the show’s most effortlessly fun hours.

The construction of “The Mall Rats” suggests Stranger Things is truly striking out on its own this season, developing its own sense of identity beyond the melange of 80’s film references it built its foundation on.

At least Hopper’s enjoying a moment of peace (and some Jim Croce): despite being an episode with a breakup and a dramatic translation of secret Russian communications, much of the drama in “The Mall Rats” is more (FILL IN). Whatever happened with Billy and this new face-sucking Mind Flayer-esque creature clearly didn’t go well – but we don’t really know what that means, just as the vision of his doppelganger and his abduction of Heather aren’t really grounded in much of anything. These moments are appropriately ominous and weird, of course, but they feel immaterial to the more grounded elements found in its characters.

When “The Mall Rats” does take time to push things forward in meaningful ways, Stranger Things feels surprisingly light on its feet, nimble in a way it often doesn’t afford. The parallel montages of Eleven and Mike (reacting to his own lies) on the phone are a particular highlight: though it is a thoroughly ludicrous, manufactured bit of drama, it does effectively capture that weird aura of young dating, where honest communication takes a back seat to make-out sessions and rampant emotional misinterpretations.

It’s still fun in a way other relationship dynamics haven’t been so far: Lucas and Max’s (apparently tumultuous) romance is more background-dressing, and let’s not even talk about Nancy’s love dramas back in the show’s first fifteen or so episodes. Plus, we get a bunch of great footage, much of it set to Madonna’s “Material Girl”: the boys trying to figure out how capitalism solves relationship problems, and Max convincing Eleven to begin finding her own sense of identity, something beyond being a supernatural being, Hopper’s daughter, or Mike’s boyfriend.

These inter-cut sequences are Stranger Things’ strongest assets: with so many competing story elements, it can be easy for the friendships of the increasingly-large central crew to lose the nuance that makes them such a fun group of characters to watch. Some of this is intentional: each season pushes the boys a bit further away from each other, to the point where Will’s left alone at the Dungeons & Dragons table while everyone runs off to chase girls at the mall in this episode. But as Stranger Things gets larger and larger, some of the complexities of these relationships disappear: “The Mall Rats” is a perfect example of why it’s worth investing in these characters, giving some texture to the inner workings of the group dynamic, an ever-changing monster in its own right.

A blossoming friendship between Max and Eleven instantly sends a shock wave through the group: her incendiary language propels Eleven’s drastic change in attitude while furthering Mike’s own paranoia about Hopper (and, by proxy, giving Lucas space to vent his dramatic relationship with Max). This seismic shift leads to Eleven nonchalantly dumping Mike in front of everyone, a moment I’m sure Hopper will relish after Joyce fails to show up for their not-a-date at Hawkin’s fanciest Italian restaurant (the one that doesn’t have a waiter named Enzo).

Most of Stranger Things‘ vague allusions are intriguing; the possibility of Hopper and Joyce together is not a particularly exciting one, especially knowing how much Joyce is still struggling with the loss of her hero, Bob Newby (the shuttered doors of his Radio Shack are featured once again this episode). Thankfully, the result here is doubly entertaining: a disappointed Hopper gets drunk and tries to reassert his sense of self-worth after eating shit for cigar-chomping Mayor Kaline all day, while Joyce learns about magnetism from a thoroughly excited Mr. Clarke, a wonderful scene all to itself (“My Bologna” is a rather weird, but fitting, introductory song for the teacher leading the Hawkins AV club).

Long-term, the prospects for a relationship between the two aren’t quite as exciting: maybe it is just romantic fatigue from all the burgeoning teen drama, but a desperately lonely Hopper and a reluctant Joyce does not portend a compelling love story forming between the two. If anything, it feels that time has passed for Stranger Things, their co-parenting coming through beautifully in the platonic relationship over the years. Then again, these two have been sharing suggestive cigarettes with each other or over 30 years, so maybe it is inevitable – but I think it’s that inevitability that makes the story so disappointing (especially in a season with so many other intriguing things going on).

That being said, “The Mall Rats” does give us a drunken Hopper in a Hawaiian shirt, so it’s not like their little back-and-forth isn’t devoid of some humorous moments. And those bits of humor are essential: be it Nancy’s disregard for the Hawkins Post‘s darkroom, or the way Steve and Dustin excitedly greet each other, Stranger Things is unexpectedly lighthearted, a welcome change from the dark, dreary opening hours of season two.

Unfortunately, with so many different things happening at once, “The Mall Rats” is only able to advance its larger narrative forward a few inches, itself a mixed, familiar bag of bread crumb storytelling. Each scene is fairly long, but essentially boils down to a couple of important bullet points: Nancy and Jonathan discover the rats are losing their shit, Billy’s clearly fucked up (and kidnapping lifeguards as a sacrifice), and Robin makes herself known by translating Dustin’s secret Russian recording from “Suzie, Do You Copy?”. Save for the last scene, which neatly folds Robin into the ever-growing group of characters, “The Mall Rats” dispenses bits of story without actually moving the needle on these stories in any meaningfully coherent way, which undercuts the tension they’re trying to build a bit (the Aliens-like appendage on that monster is pretty dope, though).

On some level, I respect it: the less Stranger Things feels the need to explain its phenomena, the better I think the show is for it (unlike The Expanse, Stranger Things is not an investigative show that needs to explain its complex/theoretical sciences). But add up every little strange element of The Upside Down and its creatures over the years, and it can be quick for the whole science fiction segment of this series to feel like a merry-go-round of bullshit. “The Mall Rats” doesn’t aggressively tip the scales towards the latter assessment, of course, but the troubling signs of Stranger Things is overstuffing its narrative early on, leave little room to coherently develop whatever the fuck is going on, in whatever the fuck parallel world the Mind Flayer and the Demo Dogs live in.

Despite the sheer amount of stuff packed into this hour, “The Mall Rats” shows a lot of promise: the arrival of puberty in the group is particularly potent, introducing some interesting emotional topography for the series to explore. There’s a surprising lightness to Stranger Things in these early hours, an effortlessness that often isn’t felt in the painstaking recreation of the cultural atmosphere of its setting (boy, does this show like looking at retro mall store logos!). The construction of “The Mall Rats” suggests Stranger Things is truly striking out on its own this season, developing its own sense of identity beyond the melange of 80’s film references it built its foundation on. That is the most exciting prospect of these first two episodes, and something I hope the show doesn’t lose as its primary story shifts to its more supernatural elements.

Stranger Things: “The Case of the Missing Lifeguard” Loses the Thread

Stranger Things: “Suzie, Do You Copy?” Is a Surprisingly Strong Opening