The many dog-eared digests of Archie Comics stashed with my other childhood belongings hold a series of simple truths, consistent in each and every volume. Archie is a lovable dumbass who wins over the people of Riverdale with his winning smile and completely clueless, utterly wholesome soul. Jughead is eternally tortured, the philosophic, burger-holic who should probably be given credit for being the original emo boy. Betty and Veronica are a dichotomy of female archetypes, playing off the tropes baked into their characters as high school females, two women torn between their friendship, their infatuations, and their frustrations with Archie Andrews, America’s goofball.

These conventions spread to the town of Riverdale, and the other people in it: Pop’s Place is where everyone has milkshakes and hamburgers, no matter what decade the comic might be written in, Veronica’s dad is a dick, Reggie is the classic bully, and Principal Weatherbee just doesn’t understand kids, man. These universal truths have been upheld in Archie Comics for decades, even in the recent (and remarkably fantastic) reboot of the mainline Archie universe in 2015. It’s the kind of comic Minister Wilford or Robert Ford could get behind – everything has its place, operating on a perfectly-dictated schedule, no matter how often the writers throw small tweaks and changes into the works.

Sure, there might be a break or left turn in the story here and there, but readers know what to expect, and they know it will be delivered with such energy and heart that it would be impossible not to enjoy, no matter how familiar or clichéd. Archie, in many ways, is the epitome of serialization in American culture; he’ll always be a redhead (the object of both brunettes and blondes, of course), and he’ll always live in a town that loves its American pie and its football.

There’s still an argument to be made that Riverdale didn’t need to be yet another murder mystery show; as a framing device, it’s probably the weakest element of the pilot.

The CW’s Riverdale takes that Archie, the guy who the world has known and loved for fifty-plus years, and spends 46 minutes saying “fuck tradition.” Like any great show on The CW, it’s the kind that makes no sense on paper (Riverdale turns into Twin Peaks, then into The Killing and Daria at the same time?), and yet somehow turns into network magic in the capable hands of the network’s creative minds. Jughead is writing in word documents, like a moody Gossip Girl? Archie is a tortured music singer, who banged his music teacher while getting ripped working for his dad over the summer? Veronica Lodge isn’t filthy-ass rich? For every moment Riverdale presents itself as a recognizable entity in the Archie Andrews Multiverse, there are three or four moments where Riverdale throws the most angsty teen drama twists into the mix, slowly transforming the classic high school setting and characters into something a lot more modern and fresh in ways I didn’t even realize I wanted Archie to be.

What makes Roberto Aguirre-Sacasa’s script work so beautifully is how confident it is in reshaping the Archie mythos. Clearly, he understands that nearly every person who is watching this show is doing so for one of two reasons: to watch pretty people be dramatic, and/or because they’re curious long-time Archie fans. As the chief creative officer of Archie Comics, there are few people more attune to the history of Archie than Roberto Aguirre-Sacas, and Riverdale‘s pilot is dripping with loving references to the long-running series, honoring its legacy while simultaneously reflecting on its conventions, remixing it for a modern audience, and presenting it in a way that can satisfy both longtime fans and newcomers alike. That is a tricky fucking act to pull off, yet “Chapter One: The River’s Edge” finds a way to nail nearly every note. Sure, some of the pop culture references and music cues feel like they’re about a year behind what they should be (when Veronica says “you’re not trending #1”, Riverdale nearly tips too far into its own parody), but how “Chapter One” completely reframes and commentates on its own, well-worn mythology is refreshing in a lot of ways other modernizations haven’t come close to capturing. Riverdale isn’t quite as clever culturally as one might hope it is out of the gate, but its self-awareness about its own familiar culture is a genuine surprise and delight.

Riverdale could be 2017’s first genuine guilty pleasure, and arguably the best “reimagining” in recent memory since Hannibal. 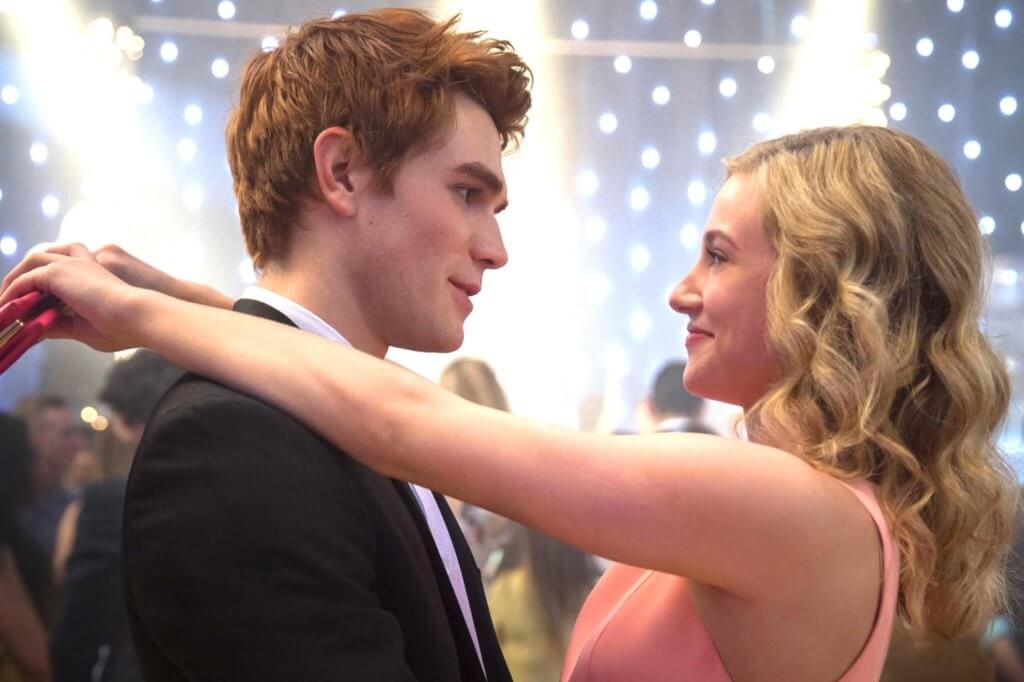 There’s still an argument to be made that Riverdale didn’t need to be yet another murder mystery show; as a framing device, it’s probably the weakest element of the pilot, though it helps develop a mysterious personality that the rest of the first episode picks up and plays with in wonderful, engaging ways (like Polly Cooper’s backstory, or the “multiple” secrets Archie has with the sexy librarian-style music teacher, Miss Grundy). Riverdale is at its hypnotic, giggle-inducing finest when it is doing its best Rob Thomas impression (the writer, not the goofy rock star), throwing shade with pop culture references and riffing on its conventions. The show nails it when it’s showing us stuff like Moose sneaking off for gay trysts with Kevin Keller, or with a series of jump cuts that reveals that Miss Grundy is not 75 years old in this world, and Archie definitely had steamy sex with her in the backseat after work one day this summer.

Riverdale is the trashy gem we don’t deserve. It understands that the mean cheerleader and the gay best friend are absolute cliches of the genre, and leans into them with a wink, a smile, and a surprising amount of thought. It’s like some weird, twisted mix of One Tree Hill (the early, high school years, at least) and that aforementioned tween version of The Killing I never knew I wanted. It may not be the Veronica Mars/Twin Peaks/Gossip Girl CW execs have posited it as, but the potential the series has is actually something far more ambitious – and potentially, rewarding – to watch. All the neon-tinged promotional photos and “spooky” trailers had me a little worried; if “Chapter One” is a template for what we’ll see moving forward, Riverdale could be 2017’s first genuine guilty pleasure, and arguably the best “reimagining” in recent memory since Hannibal. I’m not ready to heap that kind of praise on it just yet – but as with the Hannibal pilot, I’m more than a little intrigued to see where this all goes.

Black Lightning Provides Opportunities for Both Diversity and Cool Crossovers

Black Mirror, virtual reality and the dangers that possibly come with it