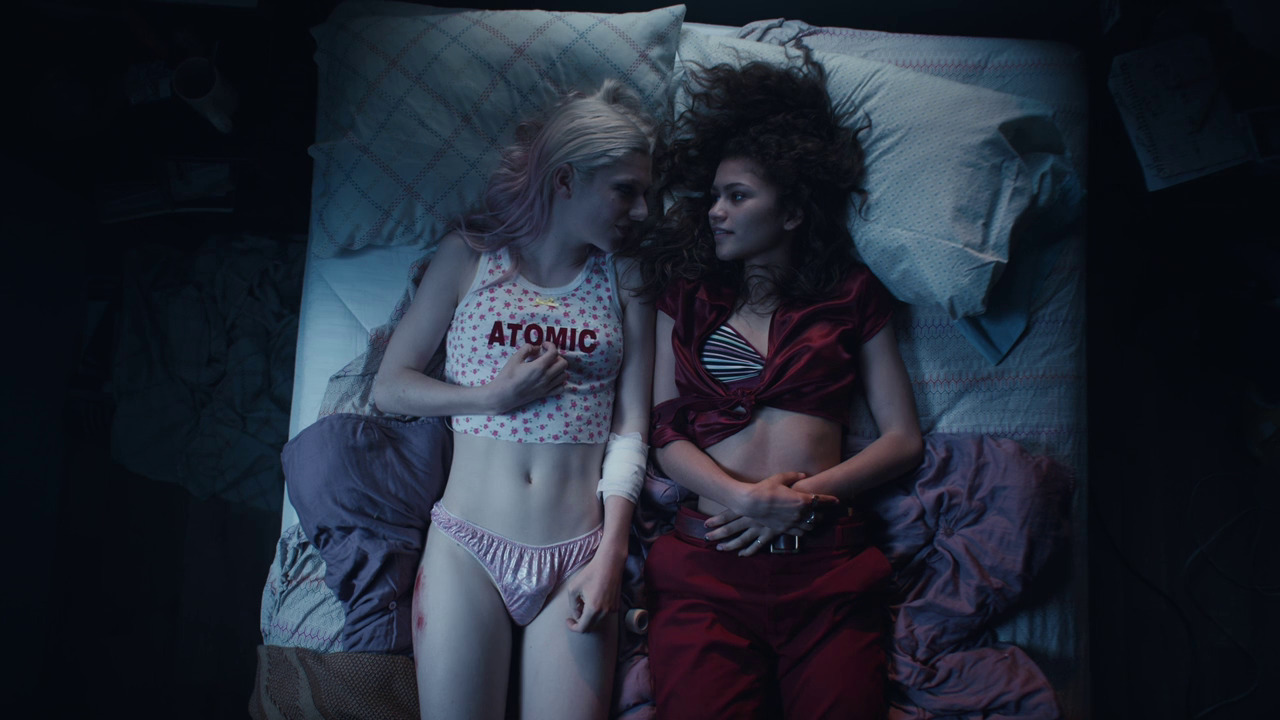 There are a few moments in HBO’s new series Euphoria that are profound in their emotional rawness, subtle ruminations on the familiar themes of identity and sexuality seen in all scripted teen-focused narratives. And yet, Euphoria‘s sixty-minute pilot can’t seem to spin those beautiful seconds of clarity into something cohesive, and moving: though beautifully directed by Augustine Frizzell, “Pilot” spends so much of its time trying to convince the audience just how evocative and casually revolutionary it is; like most teen fiction, Sam Levinson’s script feels like an imitation of Gen Z culture, more often offering superficial commentary on their place in history, rather than the nuanced, intense character piece it wants to be.

Euphoria really, really likes to express how smart and provocative it thinks it is.

Euphoria centers on Rue Bennett (Zendaya, in an eye-opening performance), a teenager and recovering addict returning home for her junior year of high school. But it is really telling a much larger story of a town and its people, which are mostly a collection of teenage archetypes; the Mean Girls, the aggressive Young Jock (or as I’ll now forever refer to them, The Kavanaugh), the Adult Male with Repressed Sexuality, the Divorced Kid… you get the gist here: Euphoria‘s first hour takes great lengths in its first hour to give ‘spins’ on these traditional stories, through the less-than-graceful deployment of “shocking” images, which include an erect penis (soft-focused, though, so it’s just a bit blurry)and a young trans woman taking hormones.

The problem is Euphoria never gives these moments any room, or depth: though it does raise some interesting questions about sexuality, consent, and drug experimentation, Euphoria‘s first hour treats these mostly as exclamation points to scenes, never able to humble itself long enough to let a moment speak. When it does, it can lead to some seriously powerful, if emotionally stunted moments: observing the arc of Jules (Hunter Schafer, in the show’s other powerful lead performance)

Filtering all of its commentary through Rue’s constant narration doesn’t help – and not because she notes herself as an unreliable narrator, a fact that should be blatantly obvious as inherent to the genre (again, Euphoria really, really likes to express how smart and provocative it is). The problem is it makes the show feel extremely myopic, in its most important moments: with Rue providing all the emotional context for the many flashbacks, dream-like sequences, and graphic sexual moments, there’s no room for the events and characters in these scenes to define themselves, which just makes everything feel a bit… exploitative for the sake of having very little to say at all.

Everything with Jules is beautifully handled, the one instance of Euphoria not purporting its own importance and letting a story breathe just a bit. Honestly, it’s strange Euphoria doesn’t make her the main character, rather than Rue, a well-established entity with little original material to drive her story. Despite Zendaya’s masterful portrayal of the character, Rue is never the most interesting person in any room she’s in: she’s just a touch too cool, lacking the transparency between character and author it needs to feel convincing.

Instead, much of it just rings a false note, using its provocative moments as distractions from its lack of understanding for the complexity of being a teenager in the age of Social Media: “Pilot” features lines like “I was born three days after 9/11” and “nudes are our currency of love,” and pairs them with images of a baby crying to an image of George Bush, and a room full of randomly shirtless teenage men watching a classmate’s sex tape.

Unlike Gregg Araki’s Now Apocalypse, which understandably takes on the tribulations of slightly older characters, Euphoria doesn’t use its hypersexualization for anything particularly revelatory. There are moments where it raises some interesting questions about consent – a scene between Jules and Nate’s father is a well-crafted entry into this complex conversation – but besides that, much of Euphoria feels like an imitation of Araki’s work, like it was filtered through Zach Snyder’s DC universe (albeit a younger, much hornier version).

Unfortunately, most of Euphoria‘s opening hour is too enamored with its ability to manufacture provocative images to make these moments resonate as much as they should -and again, the show’s focus on Rue robs it from having some more layered perspectives on its many characters. But when it does step aside and just lets its characters exist for a bit, it’s easy to see the potential it holds: there’s a scene near the end of the pilot with Jules and Rue that’s so quiet, so beautifully absent of blaring popular music and incessant monologues, it feels like a window into a different show, something a bit less jagged and cynical than what Euphoria‘s first episode offers.

Though teenage stories are fertile grounds for storytelling – the potential offered by the combination of hormones and emotional immaturity is obvious – it’s easy to fall into the trap of early-aughts Gossip Girl and Skins clones, which all feel like a bunch of adults (mostly males, of course) trying to live vicariously through fictional teenage versions of themselves. Euphoria‘s first hour is the epitome of that, the definition of a “try hard” teen drama – and despite that, I’m still interested to see where this story goes. There is just enough to this pilot to be intrigued, in spite of a terrible opening act and some equally awful dialogue choices – if Euphoria can figure out its voice as it builds out its world and story, it could stumble onto something special.

Black Mirror Saves the Best for Last With “Rachel, Jack and Ashley Too”