If you want to see if someone is a good person, look at how they treat dogs (unless they’re allergic, of course). In a world where everything seems to be going to the dogs, Dogs is a wholesome reminder that there is goodness in the world. Just look for the dog people.

“We are only scratching the surface of what dogs can do,” says a charity worker whose mission is to connect trained dogs with disabled children. The first episode of Netflix’s Dogs showcases this brilliantly, depicting a young girl named Corrinne with epilepsy waiting to be united with her service dog, Rory. The brilliant Rory has been trained to react to seizures, so whenever he sees shaking, he will bark. But like every episode in this series, it’s not just about the dog, but those dog people who seem to know no bounds when it comes to doing the right thing. For example, Corinne’s mother, the real hero of this episode, is so concerned about her shaking in the middle of the night that she sleeps by her side on a mattress by the floor. But she doesn’t complain — for her, it’s just what she’s supposed to do. Likewise, there is something very heartwarming in watching these charity workers do whatever it takes to make sure that these disabled children get the help that they need.

I only wished this episode dug a little deeper into how this was funded. Was it covered by private healthcare, Obamacare, or did they pay for it out of their pocket? By eliding this crucial detail, it’s hard to come to a concrete conclusion about whether this is a really brilliant initiative or a significant financial sacrifice.

Economic concern is something that Syrian refugee Ayham, the star of the second episode, doesn’t have to worry about. After making the brave journey both on foot and across the sea from Syria to Germany, the resource-strapped Berlin government supplies him with an apartment, a generous allowance, and teaches him courses in web development. He is happy to be out of a war-torn country where he would have faced death fighting for a cause he doesn’t believe in. There’s only one problem: his dog, Zeus, is back in Syria. It’s in this second episode that altruism emerges as the series’ central theme. Thankfully for Ayham, there are entire charities dedicated to reuniting lost dogs in Syria with their owner. We watch as brave men and women put everything on the line — including their own lives — in order to get Zeus back together with his owner.

This is perhaps the most heartbreaking tale, using the idea of dog abuse to speak to wider atrocities in Syria, including the lack of hope available to men who are not permitted to permanently leave the country. Ayham’s friend, Amer, is seemingly stuck to this fate, and is sad to part with Zeus, considering that he is a brief spark of goodness in the desolate city of Damascus. I was surprised to see that travelling to Jordan is relatively simple — only that for some men who are soon to be drafted into the army, this visa is only temporary.

This seems to be the secret mission of the series, which uses its easily marketable concept as a Trojan Dog for bigger sociopolitical ideas. “Ice on The Water,” for example, is a simple tale about a fisherman on Lake Cuomo, Italy, who takes his dog Ice with him to catch fresh food for his family-run restaurant. Typically Italian in sentiment, it doubles up as a lesson in sustainable fishing and finding new solutions to environmental issues. 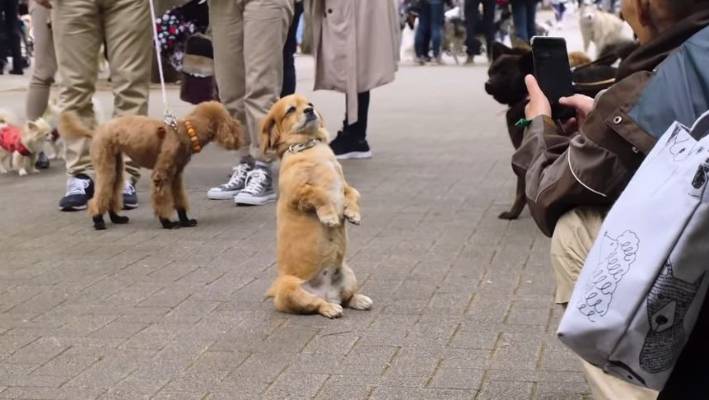 If the first three episodes are individual tales of man-dog connection, the second half takes a broader look at the doggy world. The standout is “Scissors Down,” which depicts the competitive world of dog grooming, and the culture clash between Japanese and American styles. It’s a study not only in how Japan treats dogs like children — or, in some strains of Buddhism, as mystical creatures — but also the intense dedication that goes into making a poodle as cute as possible. Digressions are common throughout this episode, the best including several women meeting up with their tiny animals at a canine-friendly restaurant. On the face of it, this looks patently absurd, but once it digs deeper into these women’s loneliness and the great joy it brings to their lives, who am I to judge? If Dogs is to teach us anything about life, it’s that your connection to animals and other people is deeply personal, and you should be proud to celebrate it any way you want.

The last two episodes are tales of rescue — one at an overflowing free-range shelter for abandoned dogs in Costa Rica, the other depicting a doggy enthusiast that transfers lonely canines from Texas shelters to proud owners in New York City. In the last episode, series creator Glen Zipper makes a strong case for New York as the best dog city in the world. With more canines than the entire human population of Cleveland, these four-legged friends come in all shapes and sizes, and the city is portrayed as a kind of real-life Zootopia. In both episodes, the lengths these people go to in order to make their companions happy is quite incredible. The dog ranch in Costa Rica is basically bursting apart at the seams, with more dogs than they can possibly wish to help, but the owners still express massive guilt at every animal they have to leave behind. The chances of weeping at least once here is high.

Dogs are the most dependable animals in the world. They can tell if you’re happy or sad, feeling well or sick, and can even help you with complex tasks. It’s strange that when a cat is friendly, their owner always says: “he’s like a dog.” If you are kind to them they will be kind to you, but if you train them to kill, then they will kill too. In that way, they are the perfect mirror for human behaviour. Dogs could’ve just been a walk in the park and would’ve still been a relative success for Netflix, but they have really put effort and ambition into telling a variety of fascinating and layered dog tales, making it one of the most surprisingly brilliant — and human — TV series of the year. Woof woof!

It’s Two Steps Back, One Step Forward for BoJack Horseman in “INT. SUB”