“From Dave: Normally I wouldn’t show you something so unrefined, I hope you understand,” is in the description of Dave Chappelle’s surprise stand-up release 8:46 on YouTube. From the start of the video, it’s already clear that the show will be far from the norm.

Outside a large gazebo is shown with Chappelle’s signature “C” logo displayed, while a microphone and stool sit in the middle of it. Beyond the gazebo are chairs, placed on both the concrete and lawn, in sets of two, and distanced six feet apart from other chairs. As cars begin to pull into the event lot, patrons are shown getting their temperatures checked with a non-contact thermometer. Everyone is wearing a face-covering/mask, some with the trademark “C” on them. As it begins to get dark, Dave arrives on stage, solo cup in one hand, cigarette in the other.

From his first words to his initial body language, it seems that the audience is in for a night of cheer and laughs as we know Dave Chappelle is always in good supply of. That’s what it seems like at first until you realize what the title of the special, “8:46,” is really referring to.

Dave begins to tell a story of how he endured the 1994 Northridge Earthquake while he was inside his apartment watching a movie at 4 am. He describes how it was the most terrifying moment of his life. It couldn’t have lasted for more than 35 seconds and yet, at that moment, he feared those seconds might be his last.

8 minutes and 46 seconds. That’s exactly how long Minneapolis cop Derek Chauvin held his knee on George Floyd’s neck as he was already handcuffed and laying on the pavement, pleading for his life that he couldn’t breathe.

Dave gets up out of his stool as his voice gets louder to tell the audience, “This man kneeled on a man’s neck for 8 minutes and 46 seconds! Can you imagine that?” It’s a moment that will silence rooms of people watching everywhere. And if you watch it by yourself, it’s sure to silence your own conscience.

Dave is expressing his thoughts out loud for the first time, in front of a live audience, and during a global pandemic no less. He sounds exhausted, and understandably so. It didn’t seem like he really wanted to say anything, but it also seems like his thoughts were bubbling to a point where he couldn’t keep them in any longer.

He explains that, as a celebrity, he’s not the most important voice at this time. It’s the people. “This is the streets talking for themselves,” he says, “They don’t need me right now.” In other, more comical words, he asks the audience, “Do we really give a f*** about what Ja Rule thinks?”

Dave goes on to talk about other tragic deaths like Eric Garner, Trayvon Martin, John Crawford, Michael Brown, and Philando Castile. And in the midst of mentioning their stories of exactly how they all died at the hands of policemen, he asks the audience, “Am I boring you?”

During the show, he brings up strange coincidences like how his birth certificate shows he was born at 8:46 am and how Kobe Bryant’s jersey numbers 8/24 are also Dave’s birthday. He also brings up enlightening connections, like how several cops who were murdered were all at the hands of black men who served in the U.S. military, seemingly fighting acts of terror both overseas and in their own country.

Though heavy-handed are the topics covered, Dave still finds ways to make us laugh. His choice words for Black Lives Matter critic Candace Owens are often hilarious and he manages to insert little bits of humor even in the middle of telling these serious and tragic stories.

Near the end of the show, Dave stops himself for a second and admits, “This isn’t funny at all.” It’s a statement that brings out laughs from the audience because it’s one of those “it’s funny because it’s true” sort of instances. Here are dozens of people waiting for Dave Chapelle to tell some jokes, only to be shockingly mistaken. No, it’s not the Dave Chappelle that we were expecting to see when we clicked on the YouTube video. But Dave’s words are compelling and meaningful nonetheless.

This is more substantial than any tweet he could’ve put out or an interview he could’ve been involved in. It’s his thoughts, unrestricted, for anyone to listen to. It’s ironic, because he talks about his celebrity self not being the most important voice to speak out right now. And he’s right, the people will speak for themselves and we need to listen to them. I know fans expect comedy when they see Dave Chappelle’s name on anything. But if we were going to hear Dave Chappelle speak in a time like this, this is certainly the Dave Chappelle we needed to hear from. 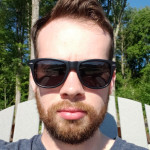 I'd live in a movie theater if I could. Watching as many films as my heart desires? Playing video games every night and watching the Celtics on a 4K Imax screen? Reclining seats and all the popcorn I can eat? Yup. That's the dream.