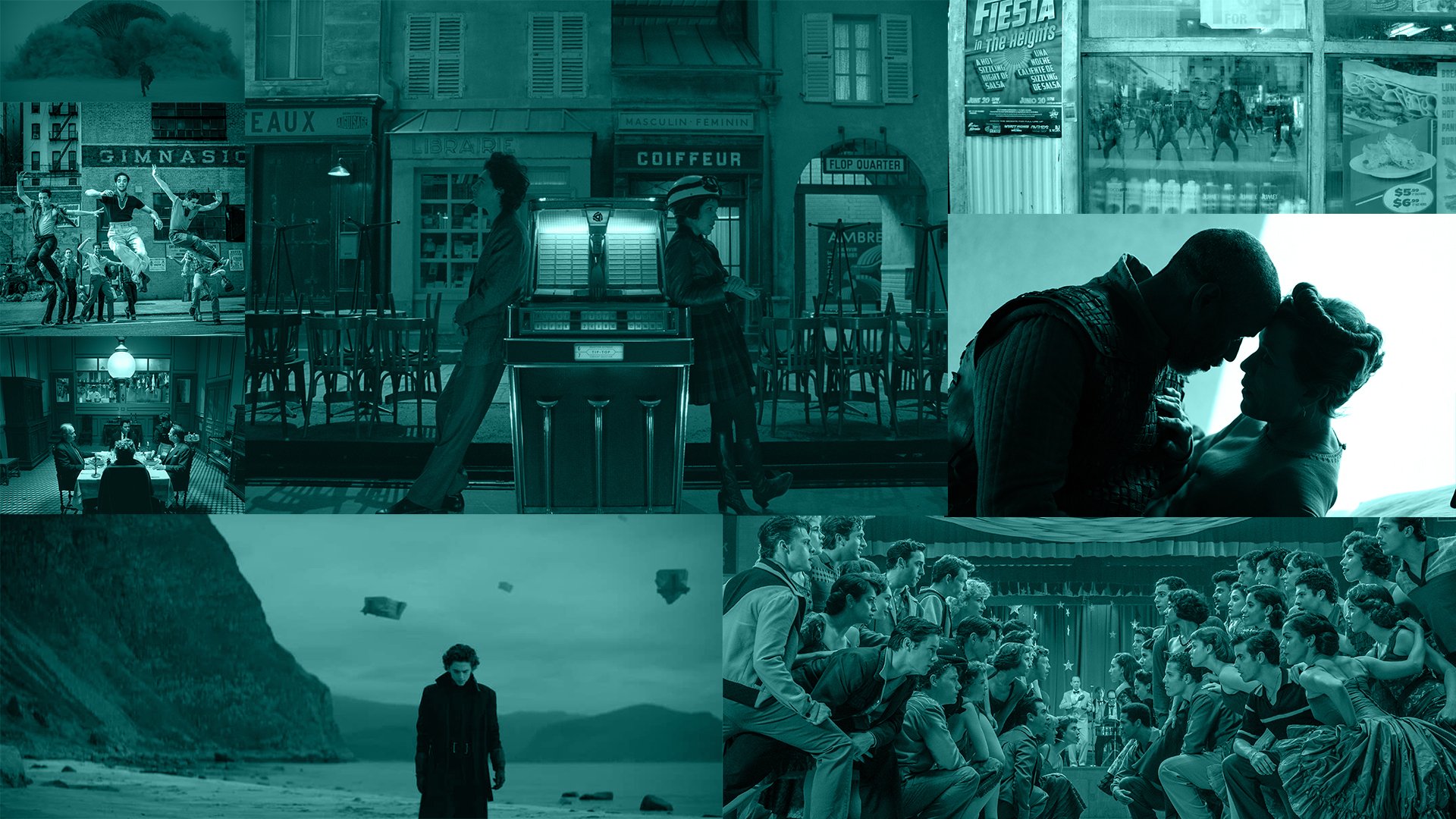 Movies are sold on their visual spectacle. It’s the job of the cinematographer or director of photography to work with the director and visual effects supervisors to use the camera, special effects and lighting to create mood and space that support the themes of the story.

This year’s slate of films was packed with releases held over from 2020 because of the upheaval movie theaters faced during the first wave of the novel coronavirus. The varied selection included the now-standard superhero tent-poles, an abnormally large number of musicals, highly anticipated features from art house auteurs and popcorn-movie blockbusters. Audiences didn’t come back in droves to the theater in 2021, but those willing and able were treated to spectacles that reinforce why a big, bright screen is superior to home viewing –no matter how big the TV is or how close you sit to it.

There are action films before and after The Matrix. Leave it to the series that invented a photographic technique, which marked an epoch in action filmmaking, to push its innovation even further. In The Matrix Resurrections, director Lana Wachowski interrogates franchise filmmaking by both satirizing and celebrating it using the series’ own legacy. The infamous ‘Bullet Time’ technique is not only evoked in the meta-referential screenplay, a variation of the time-and-space bending visual becomes a major plot point. Cinematographers Daniele Massaccesi (camera operator on Prometheus and Speed Racer) and John Toll (Braveheart, Billy Lynn’s Long Halftime Walk) along with Visual Effects Supervisors Dan Glass, Huw J Evans and Tom Debenham all contribute to a fitting tongue-in-cheek tribute to the undeniable impact of the original trilogy’s pioneering work.

Read our review of The Matrix Resurrections here.

In an unusually prolific year for movie musicals, In the Heights was an early test to see if exciting, big-budget fare would lure audiences back to theaters. Unfortunately, the energetic adaptation of Lin-Manuel Miranda’s celebrated musical became a sacrificial lamb; released earlier than many were comfortable with buying a ticket and another box office victim of Warner Bros.’ day-and-date release strategy. The care and detail cinematographer Alice Brooks (Emma, tick, tick…BOOM!) brought to magnifying the stage production is a shining example of how the language of cinema can enhance a stage play. The breathtaking opening number that shows both the film’s protagonist Usnavi (Anthony Ramos) in a bodega window as well as a reflection of the lively dance number taking place on the street is a marvelously executed visual. Film critic Emma Stefansky echoed the reaction of many viewers to the time and space hopping “Paciencia y Fe” sequence.

Read our review of In the Heights here.

The French Dispatch of the Liberty, Kansas Evening Sun

The signature aesthetic of Wes Anderson’s work is perhaps its most definitive characteristic. The symmetry-obsessed auteur’s exacting yet playful visuals are in large part due to his many collaborations with cinematographer Robert Yeoman. Yeoman returns for Anderson’s latest, an anthology comprised of stories from the fictional publication The French Dispatch. While the film possesses many of Anderson’s most recognizable motifs, it also ventures into new territory with its vignette-based format and extensive use of black & white photography. More than any of his other films, Anderson utilizes stagecraft to create baroque visuals. There are entire sets that uncouple mid-scene to reveal a larger world beyond and Yeoman tracks a camera laterally along a series of mid-fight tableaus to create a Viewmaster-like experience. Anderson is seldom considered one of the top comedic filmmakers working today, but he has consistently reinforced the adage that comedy plays in the wide shot. While this film is different for Anderson, it’s also no different.

Read our review of The French Dispatch of the Liberty, Kansas Evening Sun here.

Aside from that of Macbeth, the greatest cinematic tragedy this year was that Dune was not exclusively and widely available in IMAX. Another release trapped in the bezels of LCD screens and attenuated by the questionable bandwidth of connections to HBOMax’s servers, Dune bursts off the screen like a Shai-Hulud from beneath the spice-rich sands of Arrakis. A story so big only it’s first part was produced, director Denis Villeneuve understood the importance of communicating the scale of the Dune-iverse. From its massive spice-harvesting tanks to the sandworms that effortlessly swallow them whole, Villeneuve and cinematographer Greig Fraser (Zero Dark Thirty, Rogue One: A Star Wars Story) produced frames that work best when the viewer has to crane their neck to gaze up at the vehicles, beasts and terrain that populate the embattled galaxy.

The Tragedy of Macbeth

As I said in my review, Joel Cohen’s The Tragedy of Macbeth is a story told in shadows. Opting for a black & white format, Cohen and cinematographer Bruno Delbonnel (Amélie, Big Eyes) create a cold, hostile world of stone, fog and barren earth. The rigid structures of the Scottish King’s castle loom over its doomed and unscrupulous inhabitants. Lord Macbeth’s surreal visions blend seamlessly with the dreary, nightmare-ish surroundings. Their stark shadows create a foreboding, noir-inspired world for its players to scheme, plot and fall.

Read our review of The Tragedy of Macbeth.

For anyone that follows Steven Spielberg’s career with some degree of technical appraisal, the prospect of a Spielberg musical is a dream come true. The director is often considered fluent in the language of cinema thanks to his preternatural ability to harmonize symphonic compositions of blocking (the placement and movement of actors in a scene) with the camera. Just as the characters in a musical break out into song and dance when the energy and emotion are too much to contain, Spielberg’s camera is wont to break into its own choreographed elegance. Spielberg’s long-time collaboration with cinematographer Janusz Kaminski (Schindler’s List, Saving Private Ryan) imbues their films with kinetic excitement and ethereal lighting. Reimagining the radiant impressionism of the original filmed version of West Side Story was no small challenge. Spielberg opted to ground the story in order to make the dramatic beats more impactful; this also meant justifying much of the beauty of the original in reality. The surreal moments that signify the powerful transcendence of young love are transposed with tactile elements of the fire escape-lined chasms and commonplace gymnasiums of 1960s Manhattan’s west side. The camera indulges in counterpoint step with the glorious dance sequences that glide the audience around and through the graceful cacophony of color and movement.

15 Years Later: Children of Men is one of the Best Movies About Dystopia