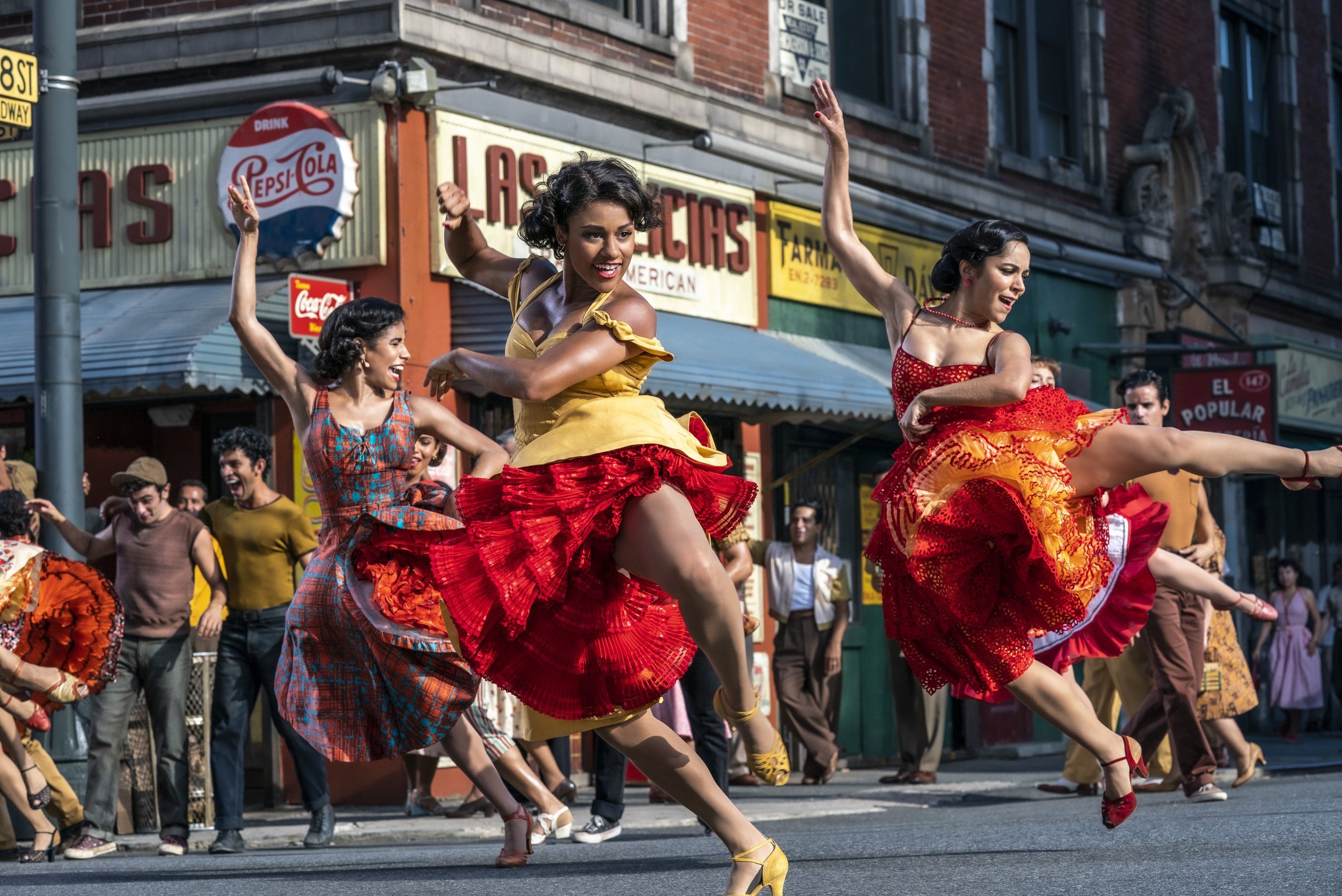 Why would someone remake West Side Story? Robert Wise & Jerome Robbins’ 1961 iteration won Best Picture at the Academy Awards. The film is bona fide classic, beloved by many and considered by some as one of the greatest films of all time and perhaps the greatest movie musical ever. The answer is as tragic as the tale the story tells. It’s unfortunately because the timelessness of West Side Story doesn’t lie solely in its interpretation of Romeo & Juliet, but also its prism of racial and power dynamics. Director Steven Spielberg understands the hallowed legacy of the story and powers through with the full weight of it on his shoulders –even if it starts World War III.

The 1961 version of West Side Story is a color-saturated reverie that takes place mostly on soundstages that filter the brick canyons and chain-link caves below the overpasses of New York City through the romance of rose-colored glasses. The realism of the new wave had not yet hit the United States so the rough and tumble setting leans on its gorgeous impressionistic flourishes. This appears to be the challenge Spielberg and writer Tony Kushner set out for themselves: how to justify the original’s beauty with reality.

Racial tensions are rising on the west side of Manhattan. Two gangs, the Jets and the Sharks, clash for control of the neighborhood that changed hands from one immigrant group to the next. The Jets, led by the passionate but misguided Riff (Mike Faist) are comprised of the children of white families that didn’t flow to the suburbs like many of their peers. They’re unhappy with the latest community to call the west 60s home, Puerto Ricans, represented by the Sharks, fronted by pretty boy boxer Bernardo (David Alvarez).

The hot-headed and economically depressed youths vie for their claim to the streets, many of which are filled with rubble from the city’s effort to demolish the quaint urban brownstones and erect luxury apartment buildings in their place. Evoking the Robert “The Power Broker” Moses of it all grounds the story in the reality of midcentury New York. The gentrification Bernardo and Riff face place it in direct dialogue with the urban inequities of today. This is one example of how Spielberg and Kushner make the celebrated classic their own.

Faist is a revelation as the ride-or-die, sperm-to-worm leader of the Jets. It’s Riff who is responsible for setting the plot in motion and Faist’s performance that makes abundantly clear that his character is the beating heart of the story. Faist, who luckily passed on reprising his stage role in this year’s Dear Evan Hanson movie, possesses a face so captivating it’s as if it was plucked from a Don Bluth animation, with a voice to match. He’s the Poochie of the film –whenever he’s off-screen, I’m wondering when he’ll be back. The charisma Fist exudes with Riff makes it easy to see why his buddy Tony (Ansel Elgort), fresh out of prison and on the straight and narrow, would capitulate to Riff’s request to roll with the Jets again.

The prelude to an all-out brawl that will decide which gang “runs” what’s left of the neighborhood takes place at a fateful dance where Tony happens upon Bernardo’s younger sister Maria (Rachel Zegler). In 1961, their meet-cute takes place on a dancefloor that transforms into a kind of love galaxy that isolates them from the busy scene as colorful “stars” twinkle in the background. In 2021, Spielberg renders this imagery by having Maria and Tony sneak behind the gym’s bleachers as the party’s lights poke through the cracks.

Zegler’s performance has the same effect as an animated Disney princess. When we meet Belle from Beauty and the Beast for the first time, she exists solely as her character. The viewer is invested in her because of how she is presented on screen, not because there is a famous actor portraying her. There is no meta-rationalization happening, Zegler is Maria. Plucked from the magical obscurity that is New Jersey, she dazzles as the smitten “Juliet” of the story. Her experience playing the role on stage shines through the camera and onto the screen. This isn’t confined to the singing performances but to Kushner’s enhanced dramatic beats as well. Spielberg is a master of working with young and experienced actors and pulling incredible performances from them (see E.T. the Extra-Terrestrial) but as this is our introduction to Zegler it’s exciting to wonder if he needed to do much at all.

Perhaps the biggest triumph of the film’s exercise in grounding is the “Cool” number, one of the more peculiar scenes in the original film. A scene where the Jets calm themselves through an arm-flailing modern dance number is moved before a deadly brawl. Spielberg turns original choreographer Jerome Robbins’s exaggerated arm movements turn into a game of keep-away with the infamous gun.

Spielberg’s mastery with a film camera allows for this justified beauty to be as enchanting as the dreamlike visuals of the original. In one of the more arresting images of the film, Tony strolls down a valley of fire escapes and laundry lines, extolling the name of the beautiful girl he’s just met. The camera cranes to a bird’s eye view of him surrounded by shivering bodies of luminescence, until he takes the next step and it’s revealed he’s standing in a puddle.

His otherworldly ability to block a scene and conjure airstreams on which his restless and nimble camera flows allow him to fluently capture the film’s numerous and renowned song and dance sequences. “America” is so big it spills out of Anita’s (a powerful Ariana DeBose) apartment and onto the streets where it engulfs an entire intersection in a crayon box of color and bursts with energy. The sequence is a breathtaking sister piece to the titular opening number of this year’s In the Heights. “Gee, Officer Krupke” gets a lively revisit inside Krupke’s own precinct. In one of the film’s few missteps, the playful joy of the misplaced “I Feel Pretty” completely deflates the emotional stakes of an important scene.

What Spielberg does with the camera, with the help of his steadfast cinematography Janusz Kaminski, Kushner does the same with the script. Along with adding dimension to the Upper West Side, Kushner strengthens the tragic Chino (Josh Andrés Rivera) and outcast Anybodys (Iris Menas); giving the characters earned motivation for their respective contributions to the plot. His prose elevates the stakes of the film with lines that draw a line from dust in a basement to a demolished four-story apartment building.

Regardless of the fact that Steven Spielberg is, by many metrics, the most successful director of our time, the idea of remaking a classic could not be lost on him. He’s a director who conquered the box office and eventually awards season with a constant mix of action-packed thrillers, cutting-edge effects-driven blockbusters and dramas that explore some of the most sorrowful periods in history. At the core of the success of those films is the fact that Spielberg is perhaps the foremost sentimentalist of our time. We’ve seen glimpses of his desire to make the great Hollywood movie musical before. It was only a matter of time before he decided to finally take a crack at it and he knocked this one out of Yankee Stadium.

The untimely, yet timely, death of legendary lyricist Stephen Sondheim, whose brilliance is largely responsible for the success of West Side Story, will forever be a haunting portent to the film’s release. It’s his insightful work that creates the immediacy of the story’s message. For many, the acceptance of Spielberg’s interpretation will lie within the viewer’s own relationship to how sacred they believe the original to be. Regardless of whether you’re a devotee or know nothing about Maria & Tony, you should go see it… tonight.

50 Years Later: A Clockwork Orange and How Sadly Relevant the Movie Continues To Be

Spider-Man: No Way Home is Better Than You Think!